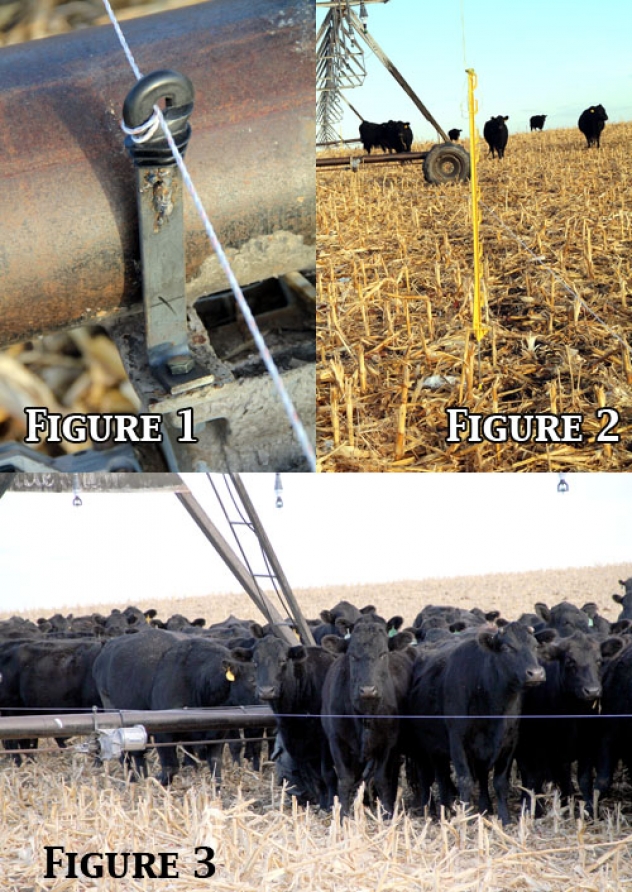 They say that necessity is the mother of invention and in the case of a Hay Springs farmer, it is absolutely true. An October windstorm caused widespread damage to corn fields across the panhandle, knocking down corn stalks laden with unharvested ears. During harvest combines were unable to pick up all of the downed corn, leaving large numbers of unharvested ears on the ground. The amount of downed corn varied from field to field, but estimates ranged from 20 bushels to nearly 100 bushels per acre of corn that was left in the fields.

The downed corn represented a large loss of income for farmers because the corn could not be marketed, but the impact goes even farther. Following harvest, most fields are grazed by cattle as a cheap source of feed through the winter. The cows graze through the cornstalk residue, eating the leaves, husks and cobs along with any whole corn (the kernels) left behind by the combine. According to Tom Holman, University of Nebraska Extension Educator in Scottsbluff County, a combine usually leaves ten bushels or less of whole corn per acre in the field after harvest. The much higher rates of unharvested corn can cause potentially devastating problems for cattle.

Cattle have evolved to utilize a diet high in roughages and low in energy such as grass and corn stalks, husks, and leaves. They can also eat feeds with much higher energy concentrations such as whole corn, but because the corn has so much more energy per pound, it is very easy for cattle to overeat (known as “founder”), become sick, and even die. This brings us back to the problem of five to ten times the normal amount of whole corn left in the field. Normally, farmers construct an electric fence around the perimeter of a corn field (usually a center pivot), then turn a large group of cattle onto the field. The cattle find enough corn to meet their needs without the risk of finding too much whole corn at one time that would cause them to founder. The large amount of corn residue in the wind-damaged fields makes the usual method unworkable because of the over-eating risk to the cattle.

One possible solution to this dilemma is to increase the number of cattle on a field of corn stalks. If we do the math, a pivot that would normally be stocked with 250 cows would need to be stocked with well over 1,000 head of cattle to safely utilize a field with 50 bushels per acre of corn on the ground. According to the Nebraska Beef Council, the average herd size in Nebraska is 94 head, making these large numbers impractical for most farmers or ranchers. Another option is to run a normal sized group of cattle onto the field for a short period of time each day. This limits the amount of corn each cow can eat, but this method is incredibly time consuming and inefficient.

Hay Springs farmer Ray Reimann was pondering this question as he sat in his grain truck waiting for the combine during corn harvest. Reimann wondered if there was a way to keep the cows on a small area of the field so they could still find enough to eat, but not big enough to cause problems with overeating. Why not run an electric fence and move it in small increments that would allow the cattle access to small amounts of the ungrazed area? But this solution would mean moving his electric fence every few days, which would be terribly time consuming…his solution? Mount the electric fence on the center pivot and let it move the fence for him!

With a minimum of materials and a lot of ingenuity, Ray came up with a system that does exactly what he intended. The materials list is very short: poly electric fence wire, 1”x3/16” steel strap cut to 8” lengths (one for each pivot tower), push-in electric fence posts (one per pivot tower), and electric fence insulators. Reimann first needed to fabricate insulators that could be mounted to each tower. To do this, he cut the steel strap into 8” lengths, drilled a hole in one end and bent the strap 90 degrees so he could create a vertical mount that bolted to the motor mount on each pivot tower using the existing bolts and holes. On the other end, he welded an electric fence insulator (Figure 1).

Next, he suspended one plastic electric fence post from the pivot at the midpoint of each span (Figure 2).

The role of the plastic posts is to help prevent the wire from drooping between towers and keep the wire off the ground in uneven terrain. Also, the poly wire is double-wrapped at each insulator so the wire stays tight between each tower rather than having one long run of wire from the pivot point to the perimeter fence.

To move his “Pivot Fence”, Reimann simply unhooks the electric fence gate handle that connects the moveable fence to the boundary fence, moves the pivot, then reconnects it. Ray moves his pivot to provide 1/100th of an acre of new stalks per cow per pivot movement. This lasts his group of 250 cows two to three days. Ray has found that managing access to the corn stalks results in less forage waste due to trampling in this system and is considering using it under “normal” conditions in the future to provide a more efficient use of his corn stalks.