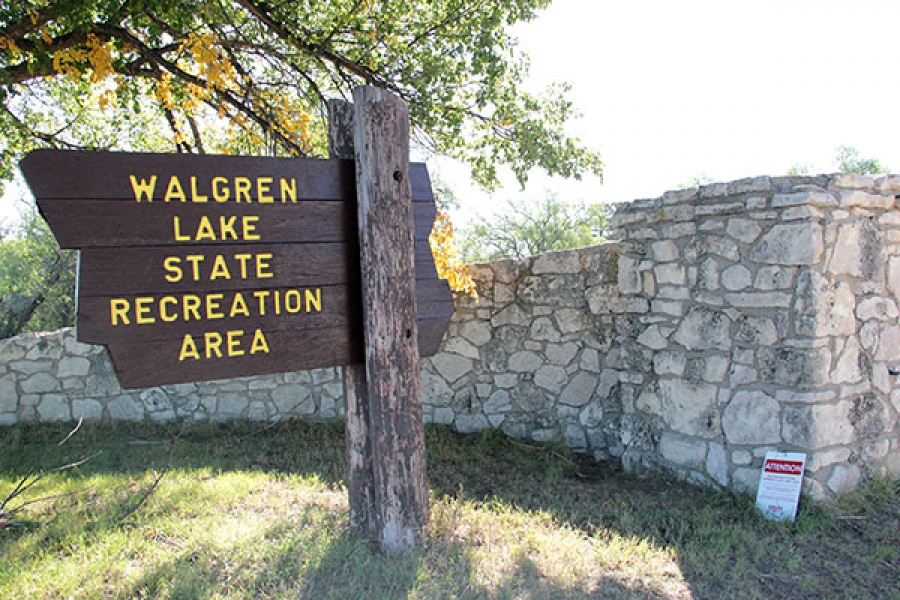 On Friday, August 30, The Nebraska Game and Parks Commission announced the temporary closure of 24 state recreation areas and five state historical parks. The areas were to close all services and vehicle access on Monday, September 16, and re-open May 1, 2014. Walgren Lake near Hay Springs and Cottonwood at Merriman were both on that list. Recently the citizens of Merriman joined together to keep the area open and took responsibility for the winter season. Now, the community of Hay Springs is considering doing the same.

Senator Al Davis made a special trip to Hay Springs Saturday morning, September 28, to discuss the issue with the community and answer all the questions he could. A large group of concerned citizens filled the senior center looking for answers and a resolution. Following a brief introduction by Gary Drabbels, Davis began the meeting by discussing a recent bill, LB 362, introduced by Senator Avery of Lincoln.

The bill, if passed, would add a $7 fee to every automotive registration in Nebraska. The fee would be in place of park permits and would go toward deferred maintenance needs of the Game and Parks in excess of $30 million. This deferred maintenance is why the Game and Parks chose to close the parks to begin with, stating that much of their expense is labor and by moving personnel from these local areas to their high priority projects they will be able to cut costs. Senator Davis went on to say that he felt the bill was not the answer to the problem.

After meeting with the people of Merriman and getting Cottonwood re-opened, Davis contacted Mike Hunzeker of Hay Springs and spoke with Roger Kuhn, Parks Division Administrator for Nebraska Game and Parks. On September 18, Kuhn sent Davis a letter outlining the Game and Parks’ budget for the winter season, listing expenses of $305 for security lights, $24 for lawn mower fuel, $50 for rest room supplies, $200 for road maintenance and $448 for an employee from Fort Robinson to come clean up and do minor routine maintenance, for a total of $1,027. It was the belief of all in attendance that the $1,027 would need to be raised by the Hay Springs community before the park could be re-opened.

Several community members voiced their concern with the budget stating that the listed maintenance was not being performed at the lake. Mayor Ron Housh showed a photo of one of the lake’s two security lights which has been broken since 2009. Housh added that the county had recently filled in the pot holes, but that it was the county, not Game and Parks. Others brought up concerns that the rest rooms were always dirty and under-supplied. A general consensus was reached by those in attendance that the community would not pay the money until the concerns could be discussed with the Game and Parks.

Gary Drabbels ended the meeting, stating “Walgren Lake has been a part of Hay Springs ever since it was started in 1885. Are we going to let the Walgren Lake Monster die?”

Senator Davis wasted no time following up with the Game and Parks, contacting them on Monday. Nebraska Game and Parks explained to Davis that the budget sent to him was simply a guide for the city as to what they could expect to be responsible for through the winter season. If the community were to take on the project themselves, no money would actually need to be paid to the Game and Parks. The group taking on the responsibility would simply be required to keep the area maintained at a reasonable level. Davis also questioned the Game and Parks about the recent maintenance issues with the lake, showing them several pictures provided to him by the community. While no promises were made, they agreed that the current condition was unacceptable.

In a phone conversation with Roger Kuhn, he stated that the itemized budget is simply a guideline and is not necessarily what is spent by Game and Parks every year. He explained that while $200 is allocated to road maintenance each year, some years may require no maintenance while other may need $500 worth. Kuhn believed the cost of the security lights was for utility expenses and stated he was unaware of the broken light.

According to Kuhn a decrease in revenue has forced the Game and Parks to cut some services in certain areas, including Walgren Lake. He added that the local communities in these areas have the opportunity to step up and take over some of these services, stating that they welcome partnerships. “We’ll sit down at the table with anybody,” said Kuhn.

Another option for the community might be to take full ownership of the lake, although certain strings would be attached. One requirement would be that the area would need to remain a public recreation area. According to Kuhn, park operations have transferred at eight different parks in the past five years.

Kuhn restated, “we’re not asking for cash, just that the park be maintained during the off season.”

A community meeting will be held Tuesday night, October 1, at 7 p.m. at the Hay Springs Fire Hall to discuss the matter further.

More in this category: « Cancellations Packing plant projected to open next month »