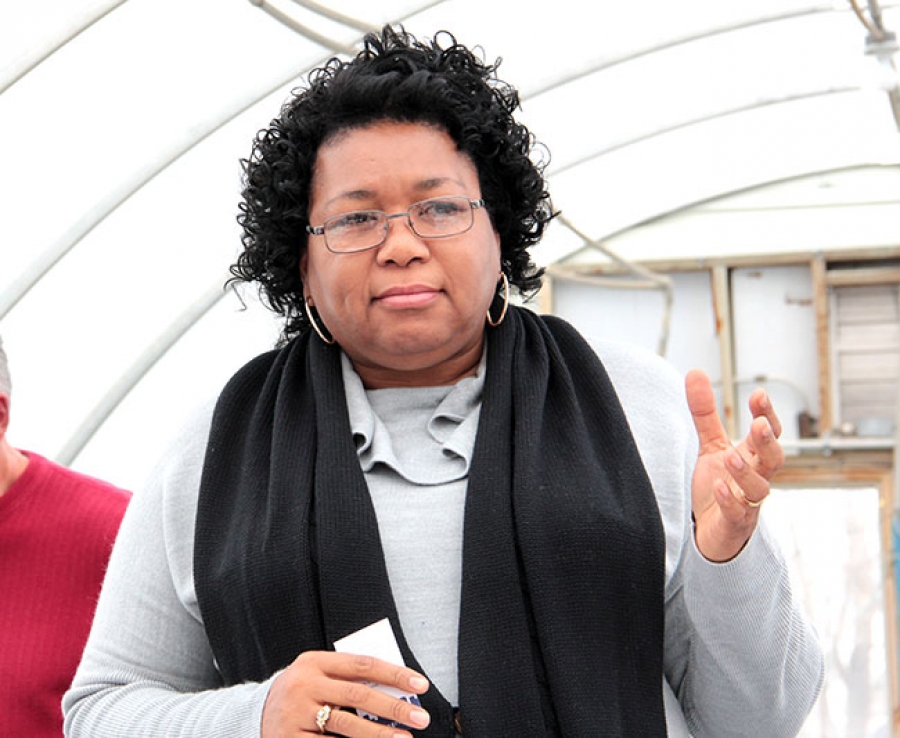 Selena Hayle of AGRM speaks to those in attendance at the gathering in Whiteclay last Tuesday. Photo by Jordan Huether

Hayle returned to the area last week, after first vising in April 2012, to assess the level of local, regional, national and tribal interest and commitment to begin the implementation of positive action and forward-looking solutions to the on-going plight of those struggling with alcohol addiction, extreme unemployment and pervasive hopelessness.

“We are excited that the Association of Gospel Rescue Missions has come back, motivating and inspiring us to work towards development of effective, lasting - really vital - strategies to meet the needs of both native and white in practical ways,” stated Bruce BonFleur of Lakota Hope Ministries. “They understand the unique historical and relational circumstances that have negatively affected many in our region, and they are here to help.”

BonFleur opened the gathering by saying, “Today in Whiteclay, gathered together is His church - the body of Jesus Christ. Represented here are pastors, evangelists, prophets, teachers, servants and many others who are experienced and gifted with every gift that God grants us. Literally, there is nothing that cannot be accomplished for His purposes, if we will come together in unity and common purpose. This is awesome!”

Hayle stated that she had received an e-mail asking for her help in Pine Ridge. After receiving the e-mail, she opened up to her entire staff, “do you know anything about Pine Ridge?” More than half of the people had a story they could tell her about Pine Ridge, and everybody said it’s one of the poorest places in the United States. “Nothings being done. Something needs to be done, but nobody has ever volunteered to do anything,” she said. “So everybody is aware of the need, and everybody talks about all the things that need to be done, but who’s going to step forward? And this is something that we face at the Association of Gospel Missions on a daily basis, because we go in where nobody else will.”

According to Hayle, AGRM exists to proclaim the passion of Jesus toward the hungry, homeless, abused, and addicted; and to accelerate quality and effectiveness in member missions. “Gospel Rescue Missions are known to be the experts on caring for the inner city poor, the last on anybody’s list, the least in every single society,” she added.

Hayle came out last year to look and see the area for herself and talk to the people in Pine Ridge, asking herself, “What’s going on; What needs to be done; and how are we going to do this?”

“Since then, God has put some things in place, just written a huge statement on our wall that says, ‘You need to be in Pine Ridge,’” stated Hayle. “And that’s why we’re here again this year, because now God has established that, yes, we need to be here. We’re here now to talk about, How are we going to make this work. How are we going to help the people of Pine Ridge to overcome all these things that are causing them all this pain.”

One of Hayle’s responsibilities at the AGRM is to go into areas, determine whether or not there is a need for a rescue mission and guide the process along to fruition. For every ministry project that she starts, the first meeting usually goes like this; “We have no money. We don’t know what we’re doing. We don’t have any land. We don’t have any resources whatsoever, but God has called us to sell everything we have and come here.”

“And then you realize years into the future, that’s the only way you can do this, because if we come with all of our money, and our materials and our thoughts and ideas, it never works,” said Hayle. “When we come though with a willingness to do whatever it takes and a passion to help people who are in need, the Lord makes everything else possible. And that’s what we’re seeing right now.

“I remember a year ago when we met right here on this property. I was told that no land was available and I was like, ‘alright Lord, if no land is available, then we can’t do what we do,’ because what we do in our gospel mission is something that is called holistic care. When people come into our missions, we don’t just give them a bed to sleep in and food to eat. We take care of their spiritual, emotional, legal, mental, you name it. Whatever needs they have, by the time they leave our doors, here’s what we’re saying to them, ‘We want you to go back into society as a productive individual. We don’t want this to be a revolving door situation or where you’re living with us for the rest of your life. We’re looking at solutions to your problem.’

Hayle asked all in attendance if they were willing to do whatever it took to make Pine Ridge an example for others to look on and say, “we don’t need to treat people like this anymore. This is how we need to start treating all of our people.” All agreed they were willing to commit to the cause.

Hayle added that the AGRM North Central District, which consists of South Dakota, North Dakota, Nebraska, Kansas, Minnesota, Iowa and Missouri, has now said they are going to adopt Pine Ridge as a district Project, which means they’re going to share their time and resources to helping make this work.

These projects are adopted for three years, and during this time, all of AGRM’s resources are funneled into these projects. Hayle’s role is to see what kind of resources we have in this community, match them with what they have nationally, and come up with a plan for how to get this done.

Following Hayle’s talk, several in attendance stood and shared their personal stories as well as why this project is important to them and what they will do to help, which in most cases was, “anything.”

“Our understanding is that AGRM will be back early in 2014 with official confirmation of their designation of Whiteclay/Pine Ridge Indian Reservation as a select area of program and resources ‘focus’ for a three-year period,” stated Bruce BonFleur following the meeting.