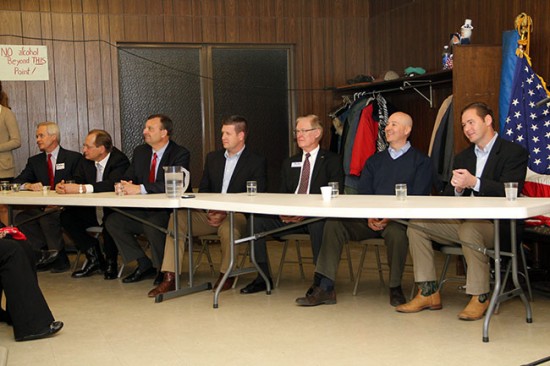 Six Republicans and one Democrat each gave a two minute introduction, then responded to a wide variety of questions.  Topics included tax policy, water issues, education, abortion, the death penalty, mountain lions, and Whiteclay.  Many other topics were also discussed in the two-hour forum as the personalities, strengths, and weaknesses of the candidates were on display.  While the big picture goals of these candidates are similar, their methods and ideas are very different.

Video of the debate is available here, www.sheridancountyjournalstar.net/videos

The calendar says “2014” and that means another election year.  Many of you just heaved a huge sigh and rolled your eyes.  I’ll admit that I did, too when I heard that there would be a debate among the seven (yes, seven!) candidates to be the next Nebraska governor on Monday night.  But as much as we dislike the politicking, it is an exciting time to be a Nebraskan.

This year, we will be replacing a popular governor who has reached the end of his term in office because of term limits.  During that time, a backlog of candidates with ambitions of becoming the next governor has grown.  Here’s the catch – we only have until May to decide who that will be.  Nebraska’s primary is May 13 and each of us will need to decide which candidate’s vision we will support.

This is the point where I jump on my soap box and exhort each of you to learn about the candidates and vote.  Now that that’s out of the way, let’s get down to what it means.  Each of us has certain issues that are important to us.  None of the six Republicans and one Democrat will agree with us on every single issue and this is why we need to take the time to learn about each of them.  The best way to get started is to watch Monday night’s debate on our website.  The video is there for you to watch at your leisure and it is a real eye-opener.

WATCH THE DEBATE.  I challenge you to watch it.  It’s about two hours in length, so be prepared - you won’t be disappointed!  If you are hesitant to watch because you are afraid that it will be boring, let me help you by giving you some things to look for.  As the debate started, the ranch gal next to me said, “it’s like judging livestock in 4-H” (which the title of this peice is a reference to, with no number assigned to any specific candidate.) I laughed, then realized that she was right.  When judging a class of critters, it’s often easiest to start from the bottom and work your way up until you have a two or three to pick from.  Try it, and this may just be easier to sort them out than you thought.

It’s not always what they say, it’s what they don’t say.  Some candidates are great at answering a question by not answering it.  Listen for real ideas and convictions behind the answers.

What qualifies someone to be governor?  Name recognition isn’t everything.  Do you want someone who knows the ins and outs of the legislature or more of a CEO?  Someone who farms or started his own business?  These seven men are all Nebraskans, but they have vastly different backgrounds (someone with a similar background to you may not be the best choice).  Many of them served in the legislature.  There are career politicians, smooth talkers, entrepreneurs, big businessmen, and raw, unpolished newcomers.  They come from farms, small towns, and cities and there’s even one with ties to Gordon and Gering (you’ll have to watch to find out who).

Don’t worry when they start talking about legislative bills…blah blah blah.  If you want to learn more about the bills and personalities in the legislature, it’s easy to find out what they are at www.nebraskalegislature.gov.

Are they saying what they believe, or just what this audience wants to hear?  It’s very easy for a candidate to say what a certain group of people wants to hear, then go to Omaha and say something different.

Do they tackle the hard questions or just sweep them under the rug?  Some candidates have a canned set of talking points that they fall back on again and again.  At one point in the debate, the candidates are given a choice of questions very important to the Highway 20 area – their responses are interesting.

There are lots of other things to watch for, so pop a bowl of popcorn and settle in with a pen and paper and make some notes.  Each of these candidates has a website, so check them out and see what they say about the issues.  In other words, do your research and then place this class of gubernatorial candidates.