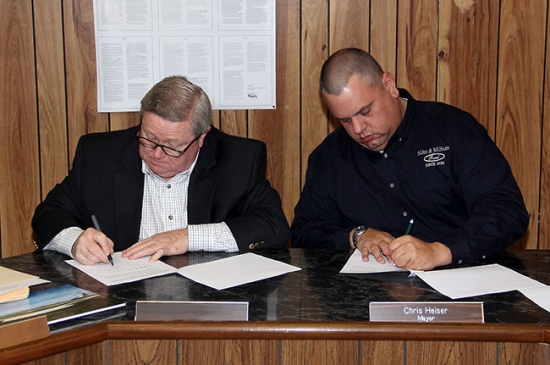 John Gottschalk and Chris Heiser sign copies of the memorandum of understanding, which lays out the responsibilities of the City of Rushville and the Carmen and John Gottschalk Foundation with regards to the Modisett Ball Park project. The documents were signed at a special meeting in Rushville last Wednesday morning. Photo by Jordan Huether

Former Milwaukee Braves head scout Eddie Dancisak once said, “There has been no town in the history of baseball that has done what Rushville has done...you’ve really got something here.”

Baseball has always been a part of Rushville’s history. In 1910 a group of local boosters put up money to build a permanent grandstand and level a baseball field north of the railroad tracks. Games played there drew crowds of 2,500.

When Albert Modisett died in 1935, he left a provision in his will setting up a fund of $5,000 with which to build a good ball park in Rushville. This was to be matched by another $5,000 set up in the will of Albert’s brother, Mayre Modisett, but Mayre was a great baseball fan and decided not to wait and to go ahead with the construction of the Modisett Ball Park. In May of 1939, a ten acre tract of land was purchased to be the grounds of Modissett Ball Park. Within a week of the purchase of the land, flood lights were installed and the diamond was laid out. The General Contracting Co. built the ball park during that summer at a total cost of around $12,000.

Dancisak brought his scouts and players to Modisett Ball Park for the Braves’ Baseball School from 1954 to 1959, then returned with the New York Yankees in ‘63. During this time, Modisett Ball Park was touted as the ‘best in all of Western Nebraska.’ While that may not be the case anymore, with the help of the Carmen and John Gottschalk Foundation, the City of Rushville, and the support of the community, the Modisett Ball Park will soon give its neighbors a run for their money.

“I know we can do this. If there are those who doubt, we’ll turn them into believers.”

The Carmen and John Gottschalk Foundation has committed an initial $250,000 toward renovating Modisett Ball Park, and to raise an additional $100,000 if the citizens of Rushville can raise $100,000 of their own before March 1, 2014. If the community raises its $100,000 by the deadline, all efforts will be made to raise the remaining primary and optional project improvement costs, yet to be determined.

At a meeting held in Rushville last Wednesday, Mayor Chris Heiser stated, “This is going to be one of the biggest projects that Rushville is going to see on a capital outlay type project - one of the bigger projects that we’ve seen ever in our little town - and it’s really going to be nice. When this whole thing is completed, I believe we are going to have the nicest ball field in the state, meaning most up to date, and technological as well.”

John Gottschalk was present at the meeting, and read through a memorandum laying out the responsibilities of the city of Rushville and the foundation, which was signed by both Gottschalk and Heiser.

Gottschalk first became involved with the project last spring when Heiser contacted him regarding the condition of the ball park. Gottschalk asked Heiser to wait a few days until he could come look at the field himself. That very day, Gottschalk mentioned the project to HDR Architecture CEO George Little at a luncheon, and told him he would need a young architect for the project. Little said, “you need Bruce Carpenter.” (Carpenter was the lead architect of TD Ameritrade Park, home of the College World Series.) Gottschalk replied that, “no, one of your young guys will be fine.”

Before he even made it back to his office, Gottschalk received a call from Carpenter himself, saying, “Don’t you dare talk to one of our young guys. I’m doing this one.”

A few hours later, HDR’s former CEO came into Gottschalk’s office and said, “I understand you’re looking for an engineer. Well, it’s me. Nobody’s going to do this but me.”

“So what we had out here was the former Chief Executive of this huge firm and their top architect, and they’re working for nothing,” stated Gottschalk at the meeting. “It’s a project that draws people to it.”

As a condition to the foundations providing any financial support, advertising signage will be prohibited within the ball park on any of its fixed structures or within 500 feet of the main view of the grandstand. “We have a clean, beautiful, spectacular park. We don’t want to junk it up,” Gottschalk explained.

Where is the money going?

• The existing grandstand has been deemed structurally unsound, so a new grandstand with weatherproof bleachers, ADA access and a seating capacity of 450 will be built. Optional bleacher extensions would raise capacity to 1,000.

• New below-grade dugouts will replace the originals on each side of the field.

• New bullpens will be constructed on each side of field.

• A new concession area and storage area will be constructed under the grandstand.

• New men’s and women’s restrooms will be built.

• A new batting cage will be erected.

• The infield will be completely rebuilt for proper drainage using state-of-the-art materials.

• A new announcer’s press box will be restored to the roof of the grandstand.

• A new scoreboard will be installed.

Additional funding received will go towards the optional improvements of new lighting and an underground sprinkler system for the field, as well as additional seating.

The field is expected to be ready for play for the 2014 season. Contributions from supporters will continue to be accepted after March 1 if the Rushville citizens assure the project with at least $100,000 by the March 1 deadline. These added funds will help finish the primary renovations and as much of those optional improvements as possible. The project is slated to go out for bid by the end of this month. The city of Rushville will be responsible for removing all the current structures at the ball park. “This project is not lingering,” stated Gottschalk.

Gottschalk concluded the meeting by saying, “I know we can do this. If there are those who doubt, we’ll turn them into believers.”

Donations can be sent to: Rushville City Hall, PO Box 99, Rushville NE 69360. Gifts made to the foundation are tax deductible and they will receipt them promptly. There will be donor recognition on site for any gifts of $20,000 or more. There will also be a donor recognition plaque of some kind for gifts over $5,000. “All gifts will be recognized with something, yet to be determined,” stated Gottschalk at the meeting.

You can call Chris Heiser at 308-360-1995 with any questions. The flyer designed by HDR Architecture can be viewed here.

What is your favorite memory from Modisett Ball Park?

Modisett Ball Park in Rushville has a history unlike any other, but only so much can be found in the records. The best parts can only be told by you. Whether you attended one of the Braves camps, your father coached here, or you got your first base hit at this wonderful field, we want to know your story. Send your favorite memory to This email address is being protected from spambots. You need JavaScript enabled to view it. or post it in the comments below and it could be published in a future issue of the Journal Star, to be on record forever!