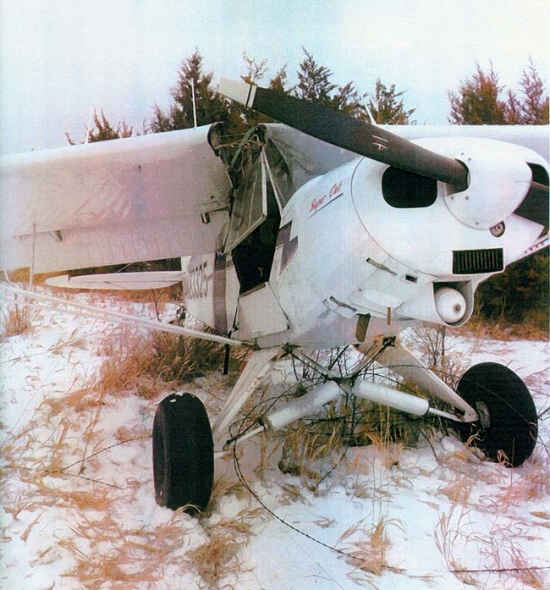 This plane sustained major damage when it crashed south of Gordon. Photo submitted

Two crew members with the USDA-Wildlife Services escaped with only bumps and bruises Wednesday, February 12, when their plane, a government owned “Super Cub” crashed south of Gordon.

The pair were returning from western Box Butte County where they had been conducting aerial operations. Approximately nine miles out the plane’s engine started acting up and losing power. They coaxed the plane along until at five miles out the engine quit.

The pilot, Gregg Alan, from Ray, Colorado, was able to land the plane on the highway at which time it was hit with a gust of wind which caused the plane to skid off the road, hitting a power pole and two fence posts before coming to a stop.

Area rancher Paul Simmons saw the accident and gave the two a ride to town. Crew member Randy Benben, of Gordon, was treated at Gordon Memorial for back and hip pain. The plane sustained major damage and the accident is still being investigated by the Aviation Training and Operation Center (ATOC) of Cedar City Utah and the FAA.