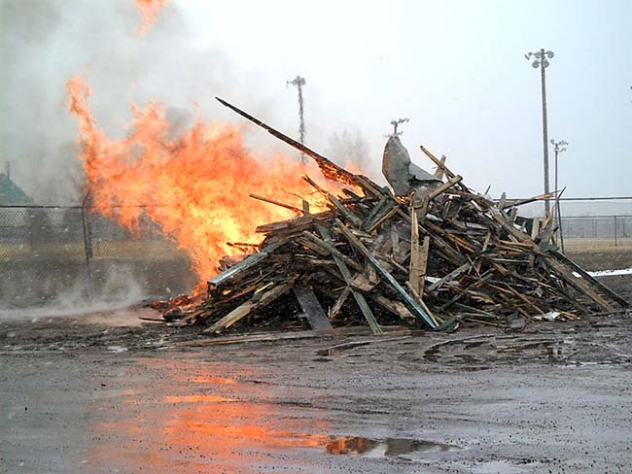 What remained of the old Modisett Ball Park grandstands was burned Tuesday afternoon.

Donors of the Modisett Ball Park Project received some exciting news during an appreciation lunch last Friday, March 7, in Rushville when John Gottschalk announced that a total of $209,000 has been raised by the community and its friends. The Carmen and John Gottschalk Foundation is adding $100,000 to their initial $250,000 to bring the current grand total to $559,000.

A total of 45 donors have made in memoriam donations of at least $500, honoring 24 deceased individuals. “The wonderful thing to me is, you start with Modisett, move on to a second generation, then a third and fourth. There’s going to be four generations who have given to this project, and that’s great,” stated Gottschalk. “In memoriam gifts are going to be a part of what this is all about. It’s about stewardship in our community.”

During a steering committee meeting held before the lunch, Gottschalk stated that his foundation will also be creating an endowment to ensure the ball park is maintained in the future. He also recommended  that a fund be established for the City of Rushville for any future donors who wish to give back to the community. Those funds could then be used to make improvements to the community and assist with other projects that require financial assistance.

Bruce Carpenter, the project’s architect, told the committee that he will be meeting with the companies who submitted bids for the project this week, and expects to accept a bid by the end of the week. Demolition has already begun on the existing grandstands, and is expected to be completed by the end of the week, if the weather allows. Carpenter added that, weather permitting, they hope to have the ball park ready for baseball by early June of this year. Carpenter and Gottschalk also collected soil samples from the infield while in town last week to be analyzed to help solve some drainage issues.

Donations are still being accepted for the project and the additional funds will go toward the addition of a new sprinkler system and lights.

Demolition began on the old Modisett Ball Park grandstands last week as anyone interested in some free lumber was invited out to the field to take what they could use. The city salvaged the rest of the usable lumber for other projects and set fire to what remained Tuesday afternoon, clearing the way for the new construction, which should begin soon.