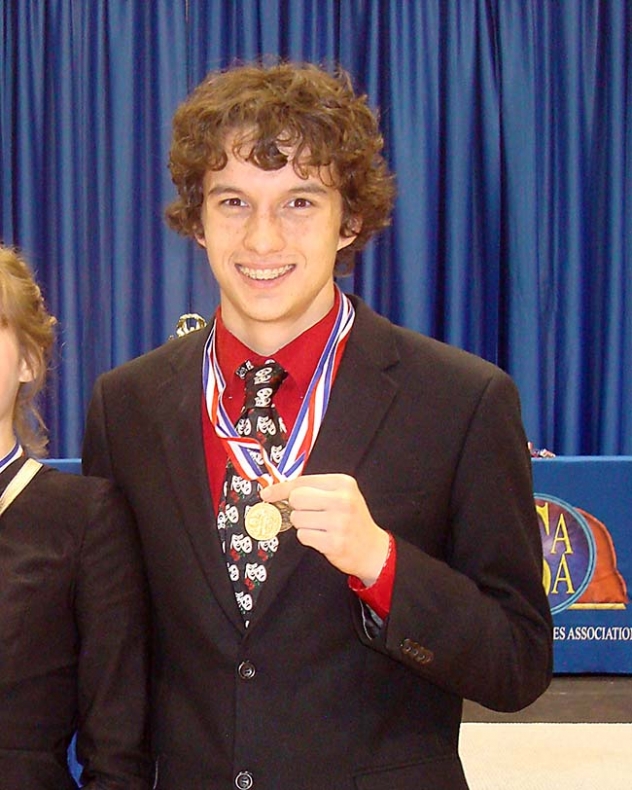 Like most teenagers, high school senior Michael Barth has a cellphone. But as he traveled nearly the entire width of the state of Nebraska, from the agricultural hamlet of Gordon to the state capitol of Lincoln, he couldn’t get cell service. He didn’t know that traveling along with him was a wave of support – and controversy.

Just days earlier, Barth’s poetry had taken first place at the Nebraska State Speech Competition. The speech, which focuses on gender stereotypes and self-identity, had been one of only nine picked to be performed for NET’s “Best of the Best” program.

But little did Barth know, as he and his speech coach drove through the historic Sand Hills, across the Platte River, and under the Great Platte River Road Archway, what the next 48 hours would hold. How could he know? He didn’t have cell service.

At the behest of his good friend, Barth went out for the Gordon-Rushville speech team as a freshman. “I’m definitely not an athlete,” said Barth, “I’m definitely a performer and an actor.”

It didn’t take long for him to get the hang of things, making it to the state competition the next year. Throughout his career, Barth frequently placed highly or won meets outright. “I’ve always improved throughout the years,” he said.

Barth’s hometown of Gordon sits in Sheridan County, where people vote Republican, adore high school football, and are vastly outnumbered by cows. His senior class has less than 50 students in it. Despite the area’s conservative leanings, Barth said his speech was generally accepted – most importantly by his judges.

“They all felt it was current and appropriate, and had a great message that really appealed to my personality.”

Barth, who describes himself as ‘feminine,’ said even his classmates, some of whom had bullied him for the way he acted, had no problem with the message his speech conveyed.

“I feel like it’s really opened their eyes. A lot of them seemed to never truly understand why I act feminine. Hopefully they see this speech and they can understand me better, and other people who may act a little bit differently.”

Unfortunately for Barth, not everyone felt the same way.

The day before arriving in Lincoln, Barth spoke with Rhonda Blanford-Green, executive director of the Nebraska Scholastic Activities Association on the phone. The NSAA had told Barth that, in order to perform for the “Best of the Best,” he would have to change his speech’s content.

“I was asked to change my program entirely,” said Barth, adding he thought the NSAA felt the speech would cause controversy. “They thought I was advocating for gay rights and transgender rights.”

Barth said the conversation “didn’t really go anywhere,” and that Blanford-Green hung up on him during the call. “She didn’t really want to hear what I had to say.”

With only a matter of hours to decide, Barth had to choose whether he would change his speech, or stand his ground – and potentially lose the chance to perform his speech for a television audience. The choice was an easy one.

“Absolutely not. I felt so passionate about this message; I knew if I changed it I would be betraying that.”

Barth said he felt not only an obligation to himself to not alter his message, but also to his peers. “If I would have changed it, who’s to say they wouldn’t have done this to somebody else?”

While Barth made his way across the state, thousands took to social media to defend him – and to voice their outrage at the NSAA. A Facebook group called “Support Michael and Acceptance of Speech” garnered nearly 1,700 members (one from France) whom shared messages of support for Barth. The Twitter handle “NE Speech Confession,” popular among Nebraska speech students, started a hashtag saying “#IstandbyMichaelBarth.” When he reached an area where his phone had service, Barth said he had 15 friend requests and 25 private messages.

“I feel really great that they’re responding how they are. Me standing my ground is the whole reason. The only reason I did that was for the speech community, so they can have a voice for the future.”

Barth wasn’t the only one benefiting from the attention. He said various people messaged him saying his stand had “inspired them to do their best (in speech) and keep going.”

By the end of the day, Barth’s situation had been in various Nebraska newspapers, broadcast on TV news stations, and even written about by The Huffington Post. Under the mounting pressure, the NSAA reversed their decision and said in a statement they would allow Michael to perform his speech as he had originally performed it during the speech season.

Barth filmed his speech for “Best of the Best,” and his speech will be broadcast along with the others when the program airs April 20.

Before the season began, Barth’s friend urged him not to do the speech. They said he “wouldn’t win with it.” He now has a gold medal. “No matter what, stand for what you believe in and don’t back down,” he said.

Despite all the attention in recent days, Barth said he hasn’t changed. “I’m just a normal boy who’s slightly feminine and I like acting and all that fun theatrical stuff. That’s really all there is to it,” he said.

He will continue to pursue acting at University of Nebraska-Lincoln, where he has been accepted into the Johnny Carson School of Theatre and Film.

While everyone has their own opinion on what his speech was about, Barth made it clear what it means to him. “I just want people to know that the message is to just love everybody and love yourself how you are. No matter how you look and act, you are who you are, and you have to stand and be proud of that.”

Editor’s Notes: Barth also had the opportunity to be interviewed with Rhonda Blandford-Green last Thursday. “She admitted that they made a mistake in saying that I should have to change my piece and she said that they were going to look at some of the rules in the NSAA about the content censorship and what kids can and cannot do, to make that clear, because it was very vague this year,” said Barth.

Andrea Gibson, author of the poem “Swingset”, which is featured in Barth’s piece, has said she wants to meet him. “That’s awesome, because I love that poet and she’s amazing!” said Barth.

Barth has also been asked to speak at the Heartland Pride Festival, another pride festival in June, and a poetry contest. MSNBC even called last Friday and asked if he would come out to New York, but he isn’t sure on that one yet. “I want to do as much as possible, because I think it would be a great experience to have,” he commented.

More in this category: « NSAA will now allow Barth to perform speech Brewer buckles down for final weeks before primary »