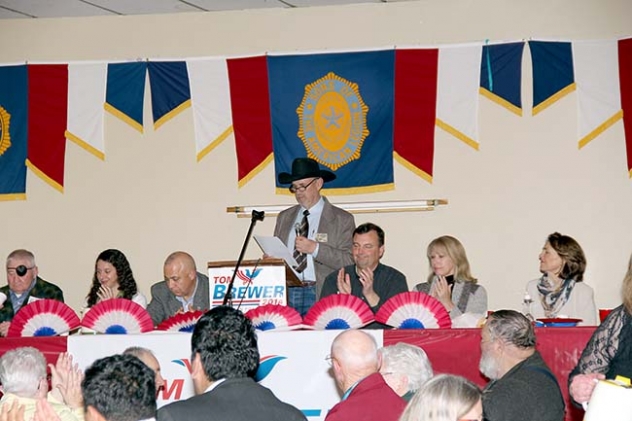 Col. Tom Brewer returned to his hometown of Gordon last week to meet with area supporters and attend a benefit dinner held for him at the Gordon American Legion Saturday evening. “Most places you just have a few hors d’oeuvres, and here they’re doing a full blown steak feed. I mean they’re really doing it nice,” said Brewer. “I’m kind of a little overwhelmed that they did it, but it’s cool that your hometown is willing to do that for you.”

In the past four months, Brewer has covered most of the state of Nebraska twice, while also undergoing chemotherapy treatments for his leukemia. His campaign will focus on northeast Nebraska, where he hasn’t spent much time yet, these next few weeks. Then, it’s time to prep for the debate on April 25 in Scottsbluff with incumbent, Adrian Smith. The debate is open to the public, and begins at 5:30 p.m. at the Panhandle Research and Extension Center auditorium.

Once the debate is done, less than three weeks will remain before the primary on May 13. “Then you do a lot of rallies rather than meet-and-greets and fundraisers, because the mold is set at that point as to how much money you’re going to have,” said Brewer. “Then it’s just a mad rush to try and get to places and see as many folks as you can before the primary. We’re saving Grand Island for the last few weeks, because if you don’t work Grand Island, there’s a good chance you’re going to lose the race.”

According to Brewer, the campaign is going good so far. “The good thing is that you’re getting more calls offering support or locations for events than you have time in the calendar to do them, so you’re trying to prioritize. That’s a good thing,” he explained. “Fortunately, we’ve increased our staff in Beatrice so we can answer all the calls coming in.”

The other key factor is finances. “When I started I had about $20,000 and he had almost a million. So, it leaves you with this numb feeling that it’s just a bridge too far,” said Brewer. “The thing you find the hardest entering the race late is fundraising, because all the guys who entered clear back last summer have burned up all those GOP supporters that are generally out there that you can get to.”

“Fundraising has really been tough, but, if you’re frugal and are willing to put enough windshield time in driving all over, you can get there,” Brewer added. “If I had to do it over again, and I was to coach someone, I would tell them to enter as soon as they can, because there’s things like that that are so difficult to overcome.”

Brewer feels confident going into the debate in Scottsbluff in two weeks, despite it being in Smith’s hometown with moderators picked by him. “To a degree, it was like going into the lion’s den, but it was my only chance to get on stage with him,” explained Brewer. “I had a lot more to gain than he had. It gives voters a chance to see the two of us together. I don’t fear coming in there that it’s an ambush.”

With only one month remaining before the primary, Brewer is done with his chemotherapy treatments for the time being, and only has one more test to complete. “These last four months, even doing the chemo and everything else, it flew by pretty fast,” said Brewer. “It’s nice to now get into where the weather’s decent. I’ve never had chemotherapy before, and it’s almost like it thins your blood. The cold is a lot harder on you. I’m definitely glad to have it behind me. The end of next week I’ll go in and they’ll do a bone marrow check. That’s the true test to know if they’ve got it in remission or not. We’ll know for sure then. Regardless, I don’t have to do anything until after the primary, because right now I’m just trying to focus on the primary and get through everything I need to get done in that limited amount of time.”

Brewer’s blood tests have been good, but the last few haven’t been as good as his doctors wanted them to be. He believes part of that might be due to the fact that cancer patients are told to avoid crowds and get a lot of rest. “So, I’m kind of the anti-cancer patient, doing what I’m doing,” said Brewer. “They think once I kind of slow things down and have a chance to get a normal amount of sleep and pull the stress factor out, that I’m probably going to be fine.”

“Fortunately, when you hear the word leukemia, it’s a little bit daunting, because people don’t realize there’s different flavors of it,” explained Brewer. “There’s the really bad, where you literally only have a few months to live, and then you have the hairy cell, which is what I have, that’s down on the other end of the spectrum. So, it’s very treatable.”

Brewer plans to push hard this final month, and feels that if the debate goes well and he can have some really valuable stops in those last 14 days, then he’ll be alright.