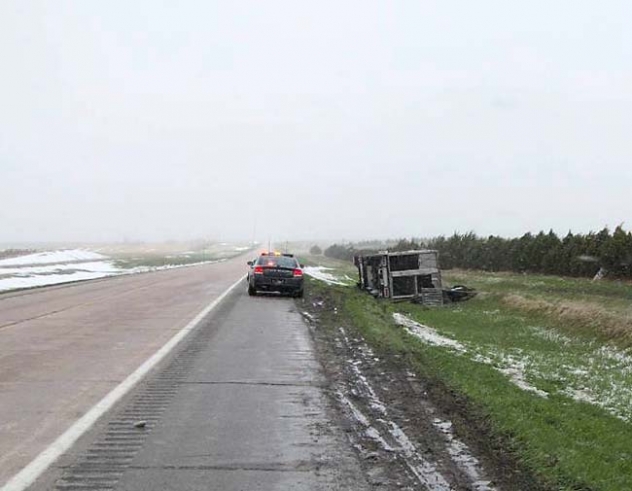 A severe winter storm blew through Sheridan County this week bringing three inches of heavy snow and rain with high winds, causing a significant amount of damage. Both Gordon-Rushville and Hay Springs called off school Tuesday due to poor road conditions. According to the Sheridan County Sheriff's Office, a total of ten accidents were reported in Sheridan County Tuesday, including a two car collision early in the morning. The extent of the damage and injuries is not yet known.

There were two accidents involving semis within two miles of each other just east of Hay Springs Tuesday morning, forcing authorities to close Highway 20 between Rushville and Hay Springs. The first semi accident occurred six miles east of Hay Springs on Highway 20 at 7:27 a.m. Scott Michael Williams of Neiligh was traveling east,  hauling 68 cattle, when his semi was blown off the icy road by 50 mph wind gusts. The truck was rolled onto its side, killing ten of the cattle, while many others escaped. The Nebraska State Patrol, with the help of  the Sheridan County Sheriff’s Department, was able to round up the escaped cattle. At 8:54 a.m., a semi jackknifed in the middle of Highway 20 four miles east of Hay Springs, blocking the highway.

Several trees sustained significant damage from the heavy snow and wind, including many at the Gordon Cemetery. A wind advisory remains in effect until 6 p.m. Wednesday.