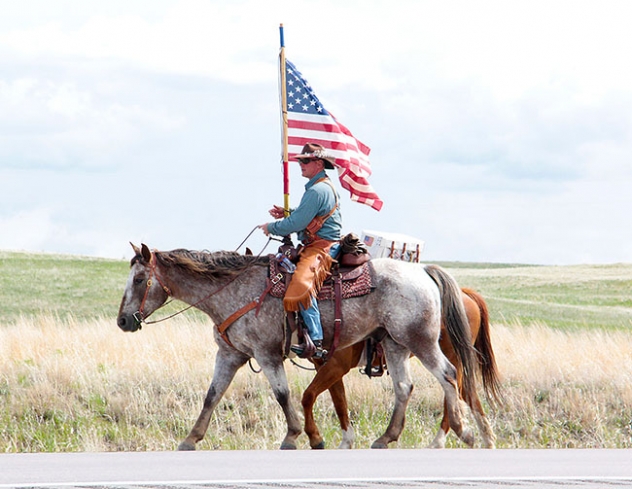 Sam Hubbard travels east toward Gordon on his six-year-old quarter horse, Ruger. Hubbard is performing a One Nation Ride, riding across the United States of America spreading patriotism and unity. Photo by Jordan Huether

If you did any travelling on Highway 20 between Chadron and Valentine this past week, there’s a good chance you caught a glimpse of Samuel E. Hopkins-Hubbard carrying an American flag on horseback. Hubbard is performing a One Nation Ride, riding his horses, Ruger and Tucker, from Milton-Freewater, Ore., to the east coast, all the while spreading words of freedom, hope and unity to bring this nation together so that it is “once again a beacon of light to all other nations and peoples.”

“The United States of America needs hope for the future - some good news! Luckily there is good news, and it is this: The Founding Father’s of this great nation gave us a system (The Constitution) that has allowed this country to become the greatest nation the world has ever known!” stated Hubbard on his website.

Hubbard reached Sheridan County on Thursday, camping west of Hay Springs for the night. He spent some time visiting with the people of Hay Springs Friday, then continued east. On Saturday, he continued on to Gordon, arriving at 4 p.m. Hubbard stayed in Gordon through Monday morning, attending a few local events and visiting with many supportive community members while his horses rested.

One person, in particular, really touched Hubbard. Oscar Gonzalez and his two boys, Isaiah and Oscar Jr., stopped to visit with Hubbard, and Gonzalez asked Hubbard to carry his US Paratrooper and Afghanistan Veterans pins with him across the country to honor his brothers and sisters in arms. Hubbard stated on his facebook page, “Today I had the privilege of meeting Oscar and his sons. It is Armed Forces Day. Oscar is sending a gift with me across our country to honor his Brothers and Sisters in Arms. I want to speak to the hearts of all my brother and sister Americans. Our soldiers put their lives on the line for us everyday. Many don’t come home, and so many more come home wounded. They do this for you and me. The least we can do for them is to make certain that when they leave the military, they still recognize the country they are coming home to. As citizens it is our duty to protect our founding documents that ensure all our freedoms. It is our duty here at home to fight against any enemy...foreign or DOMESTIC...that threatens our constitution. These are the documents that hold us together. They are the documents that allow a melting pot to become a shining light to the world. STAND together and fight for our soldiers. NOW FLY THOSE FLAGS HIGH, LOUD, AND PROUD.”

Hubbard expressed much gratitude toward the people of Sheridan County, and pride in our patriotism. He added that “We need to quit fighting over our differences and remember what makes us Americans, because that’s the only way we’re going to maintain our freedom. That’s what it’s about. It’s just a patriotic ride trying to wake people up, to say ‘Hey, somebody’s got it backwards. It used to be the government worked for us, now they think we work for them.’”

On his website, Hubbard adds, “The basic principles that this country was built on still exist today and we are still the melting pot of the world. We all have different ideas, beliefs, cultures, and different needs, but this nation’s founding documents make us Americans, united in one cause; to defend and honor this nations Constitution - based on freedom of religion, freedom of choice, freedom of speech and the freedom to defend ourselves against both external and internal tyranny. ALWAYS remember that a House/Nation Divided Cannot Stand, so lets ALL work together as Americans to stay UNITED in one cause: FREEDOM!”

You can read much more about Sam, his journey, and his horses online at http://onenationride.com and keep track of his progress on Facebook at http://facebook.com/onenationride