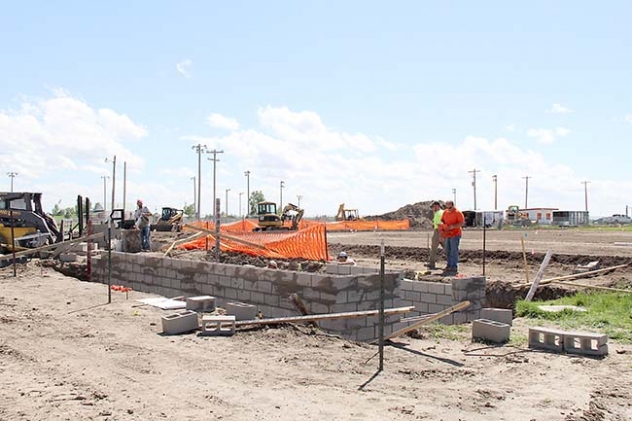 Nemaha Sports Construction workers construct the new dugouts for the Modisett Ball Park in Rushville. The ball park is expected to be completed in August of this year. Photo by Janet Skinner

For 75 years Rushville’s Modisett Ball Park played home to everyone from kids with their dad’s old ball and glove to professional league hopefuls, all sweating under the summer sun while enjoying America’s favorite pastime.

Now, with construction of a brand new ball park under way, the only people sweating at Modisett are construction workers like Ray Hashman.

“A good 10 hours (work) a day is what we’re shooting for,” said Hashman. “Mother Nature kind of controls that though.”

Weather has indeed been a problem, with rain and snow causing delays that pushed back the opening day of the new field from mid-June to mid-August. It even rained during the park’s dedication back in 1939.

While the casual observer may see only mounds of dirt and construction equipment, Hashman said work is under way. Infield mix and conditioner was added on May 19 to give the infield ability to hold up better in wet conditions and dry quicker; it also gives a deep-red color to the skin mix.

“I think they’re getting the field pretty close (to done),” he said.

The infield is now to grade and the pitcher’s mound is soon complete. Sod should be delivered and installed by the end of the month.

Rushville City Superintendent Kirk Beguin said there is still work to be done, and the current priorities are things most people won’t even see.

“They’re getting the footings for the grandstands in. They need the footings first, then they need to get the water system into the park (ball field), before they put sod on.”

Pouring of the footings began on May 21, starting with the dugouts, then the grandstand, and then the rest rooms. Work has also begun with the underground plumbing and irrigation.

Beguin said work on the field, which began in April, should be done mid-August, and the grand opening ceremonies will be Labor Day weekend during the annual Fun Days.

Nemaha Sports Construction is in charge of construction.