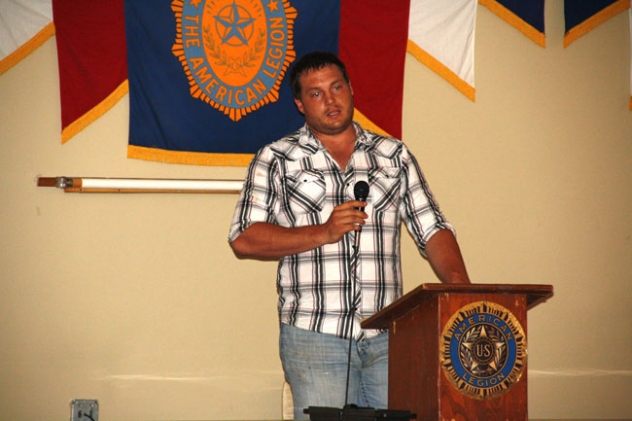 Bud May speaks at the meeting held in Gordon last Thursday. Photo by Brent BonFleur

Wounded Knee, S.D. resident Linda Hollow Horn was happy to take advantage of the complintary chocolate chip cookies provided at the American Legion in Gordon Thursday, May 29. After all, she is going to need her full strength – and maybe a little sugar – if she, and many others, plan to carry out their goal.

“We’re ready to take on the government,” she said.

Hollow Horn was one of over 80 South Dakota and Nebraska residents to attend an “informational meeting” about the controversial proposed Tribal National park on the South Unit of the Badlands National Park in South Dakota.

Support for what would be the first Tribal National Park in the U.S. has come primarily from two entities: the tribal council of the Oglala Sioux Tribe and the National Park Service. Meanwhile, opposition from the public, especially those on the Pine Ridge Indian Reservation and ranchers who lease land in the South Unit, is fierce.

Twenty-nine-year-old May ranches on some of the land that would be condemned and set aside for buffalo herds (called the Stronghold Grazing Unit) if the proposed park is approved.

“Fighting” alongside May is Lory Storm, who opened the meeting with a grim warning. “We need to get organized, informed, and try to stick together or we’re going to start losing ranchland by the thousands of acres,” said Storm.

After opening remarks by Storm and May, the meeting shifted to tales of people who would be affected by the park.

Wounded Knee, S.D. resident Phyllis Hollow Horn said her grandparents were given less than one dollar per acre for their 618 acres of land. Her friend, Wilma Thin Elk, also opposes the idea of the proposed park.

“I catch any buffalos on my land they’re going to be dead,” said Thin Elk, “Red Shirt Table is going to have fresh meat every day.”

Talks between those opposing the park and the tribal government’s core team (government workers assigned to manage park issues) have been far from fruitful – or even existent.

“They avoid us at all costs,” said May, who added he has “run out of fingers and toes to count” how many meetings he has attended.

C.J. Clifford, a self-described “wild Oglala,” is one of many who would be forced to give up land that has been in his family for years. Clifford described the meetings as “a lot of chicken scratch, a lot of notes taken, a lot of questions asked” with few results.

Another point of controversy is exactly what land will be affected. Clifford says the language used in the actual proposal, Ordinance 13-21, is unclear – drawing particular attention to the word “adjacent.”

There is concern that the park might not be solely on the reservation and in South Dakota, and that it could spread to parts of Nebraska.

“Being (in) the Sand Hills, I’m sure they want a piece of you also,” added Clifford.

May said he believes that informational meetings such as this can help the cause of those opposing the proposal.

“It’s strength in numbers. We can get it staved off if we have enough people behind us,” he said.

While it has been a struggle, Clifford says the resolve of the people to get what they want is strong, and more meetings like this are planned - even after being told “’this (park) is going to happen anyway.’”

The public comment period for the proposal is open until June 6. Comments may be submitted at http://parkplanning.nps.gov/document.cfm?parkID=117&projectID=49473&documentID=58611.

Superintendent for Badlands National Park Eric Brunnemann said the decision of what land will be used for grazing is made by the tribe.

Brunnemann added that no new land is being added to the existing park, only that some of it is “just being redesignated,” and that “private land stays private.”

NPS director Jon Jarvis could not be reached for comment.