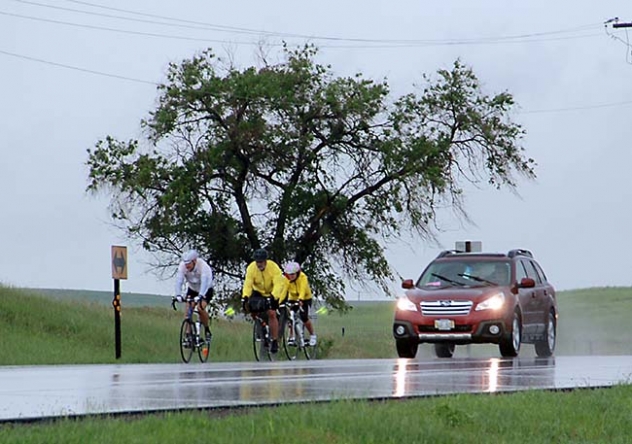 BRAN participants got a little wet on the fist leg of their journey, with many having to stop in Gordon to warm up. Some of the early-birds even had to ride through hail. Photo by Jordan Huether

Bike Ride Across Nebraska (BRAN) has been sending bicycle aficionados and amateurs alike peddling across the state of Nebraska for 34 years.

Each year, hundreds of bikers gather in what is typically a rural, western community and then make a 400-plus mile trip to their eastern ending point.

This year, Rushville was selected as the host community - the first time since 2001 that BRAN has stayed in Rushville.

With 535 registered riders, and over 100 staff and volunteers, BRAN provides a shot in the arm to many small communities. Needing plenty of fuel for their long journey, the bikers flocked to local restaurants and food booths set up near the camp ground at the Gordon-Rushville Middle School practice football field.

They were also treated to various events held throughout the town. There was an overall positive feeling from the visiting bikers.

“I’m really happy with the way the town stepped up,” said Heiser. “I was just plum-tickled (at the results).”

“Very cool. For a small town, they have done it up very well, I believe,” said Kelly Smith, a BRAN bike mechanic.

The bikers left Rushville as early as 3:00 a.m. on Sunday, June 8, but torrential rain and relentless wind kept all but approximately 60 riders from reaching their next stop in Cody.

With better weather on their side, the riders left Cody on the longest leg of the trip (85+ miles) to Springview.

(After Springview, the BRAN riders will stop in Atkinson, Verigre, Laurel, and Lyons before finishing their ride in Waterloo on June 14)

See many more photos from this year’s BRAN at sheridancountyjournalstar.net/photos