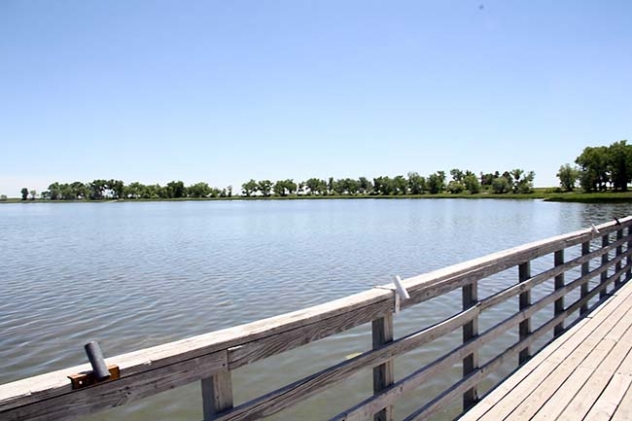 Walgren Lake State Recreation Area may soon become a waterfowl refuge. While some community members are for the refuge, many are against it or undecided. Photo by Brent BonFleur

Accompanied by his brothers and their friends, Raymer would make the five mile hike from his house to camp and fish in the lake his family partially owns.

They would “haul their crap” (tents and fishing poles) on their backs and spend a week or more each trip, cooking the fish they caught over an open fire for food.

When night fell, they would burn marshmallows and “flick ‘em into the air like shooting stars,” and perform “improvised surgery” when someone got a hook stuck in their head.

Raymer, now 38, has a son of his own, Dylan, and he wants his son to create his own memories of spending time at the lake.

So, when the Nebraska Game and Parks Commission held a public meeting at the Hay Springs Senior Center Tuesday, June 17, Raymer was one of about 60 people who packed the cramped building to share their thoughts on the proposed addition of a waterfowl refuge to the Walgren Lake State Recreation Area.

The meeting was divided into  three sections, the first being  opportunities a refuge would provide for the lake and community of Hay Springs.

Raymer championed the cause of those who want to see the refuge approved, saying it would increase the number of waterfowl available to hunt and  cut down on drive time to other hunting grounds for Sheridan County residents.

“We are wanting to create an opportunity for local sportsmen,” said Raymer, adding “If we open a refuge, they will come.”

Mark Vrtiska, waterfowl program manager for the Nebraska Game and Parks Commission said the  Commission has “no idea” how many birds would use a refuge, or to what extent they would use it.

Vrtiska said, typically, the most controversial issue the Commission faces is weighing whether the hunting opportunity  created justifies the cost and hassle of creating a refuge.

“It seems like we’re going to gore somebody’s ox whether we do it or don’t do it,” he said.

Plenty of people had oxen to be gored, as the meeting shifted into issues a refuge might cause.

“This is bull s--t,” shouted one member of the crowd.

There was general concern that a refuge wouldn’t attract a significant amount of waterfowl, considering larger refuges already exist nearby.

Crescent Lake Wildlife Refuge in neighboring Garden County boasts nearly 46,000 acres of waterfowl refuge, part of just under 65,000 acres of total refuge in the surrounding area. The proposed Walgren Lake refuge would add only 120 acres to that number.

Another major dispute is that, while hunting may benefit, fishing on the lake could be hurt.

“We have a lot more fishermen than we do hunters,” said Michael Varn, of Gordon.

Varn added Walgren is especially important to children and families for recreational use, as well as fishing, due to its close proximity to local communities.

Varn says while he can “go anywhere to hunt and fish,” some families can not.

“It’s a real important fishing destination for families, and that’s my primary concern,” he said.

If the refuge were to be built, it could close the lake to public use for as long as five months (likely less), which some contend would hurt Hay Springs’ economy.

“There are some people in this town I know, that rely on selling groceries and gas (brought in by visitors to the lake),” said Jim Weber, of Alliance.

The meeting ended with a question posed to the audience: what is important about Walgren Lake?

While a raise of hands vote showed a clear majority were opposed, many raised their own hand to say they simply do not yet know enough about what impacts the refuge will actually have on their beloved 70-acre swimming and fishing hole.

Some use it to walk their dogs or host picnics. To others, the historic value of the lake as a local landmark keeps them wary of change.

And to Justin Raymer, the most important thing is that his  7-year-old Dylan has a place to hunt waterfowl, just as he and his father did.

“When you’re young, you like to do that stuff,” said Raymer.

“Hopefully, he’ll get to do that.”

(The Nebraska Game and Parks Commission said another meeting is likely to be held, but have given no date as of this time.)

Tell us what you think! Fill out our online survery at https://www.surveymonkey.com/s/GKVRFK2

More in this category: « Peterson sentenced on two counts for firing upon vehicle Dedication held for Whirl Wind Skate Park »