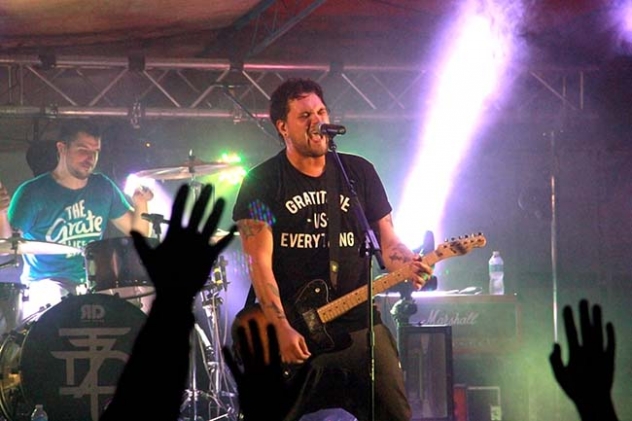 7eventh Time Down put on an incredible show to wrap up the Reckless Youth Rally in Gordon Saturday. See many more photos at http://sheridancountyjournalstar.net/photos Photo by Jordan Huether

Over the weekend the Christian Motorcycle Association held the Reckless Youth Rally in Gordon. People came from all areas of the state, some from out of state, to come together for worship and fun in God’s name.

You could feel the love and joy from all those who were there. Strangers embracing strangers, old friends reunited, it didn’t matter if you were known or not, what mattered was you were there.

The evening started off with a warm welcome and prayer from Rose and Tiffany Chappell. Tried and True preformed first and the floor filled with people ready to sing for Christ. People of all ages joined in and with hands lifted in the air they sang along. “I love things like this. It’s what keeps me young,” stated Judy Baxter of Gordon.

“God has a purpose for each one of you and sometimes in life it is so hard to feel that you have a purpose. You just have to hang in there and have faith. Faith is everything. Its all about love,” stated Shon Hawke, general manager and member of the band Forgiveness 490 as they started their performance. This rock and roll gospel band from Kearney rocked the auditorium. There wasn’t a person there that didn’t have some part of their body moving to the music.

Saturday kicked off with a performance by Tried & True, followed by a great show of wrestling by the MWA Professional Wrestling team from the Omaha area.

After lunch, the audience of over 100 was treated to some breakdancing and words of prayer and inspiration from Kyle Sinacori - American Ninja Warrior, Breakdancer and Preacher from Denver, Colo. Brian Biddleman, CMA Iowa Youth Movement Rep, then spoke to the group.

From there, the rally moved on to the Whirl Wind Skate Park, where the group was treated to a demo of some incredible skateboarding by JSAW ministries of Edna, Minn., and Process Ministries of Colorado Springs, Colo. They then shared their personal experience with God and gave the group more words of encouragement.

After supper, the rally wrapped up with some incredible music at the Sheridan County Fairgrounds. Jack Diven Worship of Mobile, Ala., started things off, followed by Jerod McPherson, CMA Vice President and National Youth Movement Youth Evangelist.

7eventh Time Down finished the evening with a performance the audience wont soon forget. They performed all their hits, including “Just Say Jesus,” and reminded the audience to trust in the Lord.

A total of 125 signed the registration sheet at the door, with people coming from as far away as Texas. Another 80 volunteers and artists were in attendance. “We had a group of students from the Grand Island area and students from Iowa. We had planned on a larger group from Iowa and Wyoming, but unfortunately, circumstances kept them away,” stated Rose Chappell, youth leader for Reckless Youth Movement.

“Although we did not have as much of the local participation from the students right in Gordon as we had anticipated, we believe this was a complete success. We were competing with at least two Fair and Rodeos and many other important events,” Chappell explained. “We know it’s not about the number of students who showed up, but the decisions that were made and if those who attended were inspired. That is were we know it was successful! We know of at least one adult who made a life changing choice to accept Jesus as their Savior. There were so many more students who were inspired by words of encouragement directly given to them by the speakers of the weekend.”

“Students found out that they can make a difference now, they don’t have to wait to become an adult. They are special, loved and important! We believe that this generation has been forgotten and pushed aside, but we know that they are not only our future but they are the now! They are the ones who will change the communities we live in, they are the ones who will change this world. All they need is support from the community they live in and the people close to them.”

“The greatest threat to this generation is depression, because they feel worthless and unloved. This weekend, for those who attended the event, this changed and they know they are loved and we care. They saw with their eyes that no matter what it is that they love to do or that they have a desire to do, God will use those gifts to make a difference, when they give them to Him.”

They have been asked if they will hold the event again next year, but they aren’t yet sure, adding that, if they do, it may not be on such a large scale. Chappell added that it is something they will need to pray about and seek God’s direction. “We know that if it is God’s plan, then it will succeed and we know that God will spend an unlimited amount of money to reach even one person, because He is love,” said Chappell.

They are asking for the input from the community and those who attended the rally on facebook at www.facebook.com/RecklessYouthRally

Would you all like to see more events like this one? Maybe during the winter months when there is less going on? What kind of speakers would you like to see? What type of music? Did you make a life decision, did you feel the healing hands of God, Let them know. They want to hear for you!

“The Reckless Youth Movement truly appreciates all who supported this event and who believe along side of us for an inspiring weekend! The city of Gordon definitely made an impression on our state and national CMA leaders and they hope to see more events like this one in more cities across the nation, Gordon you are an inspiration!” concluded Chappell.