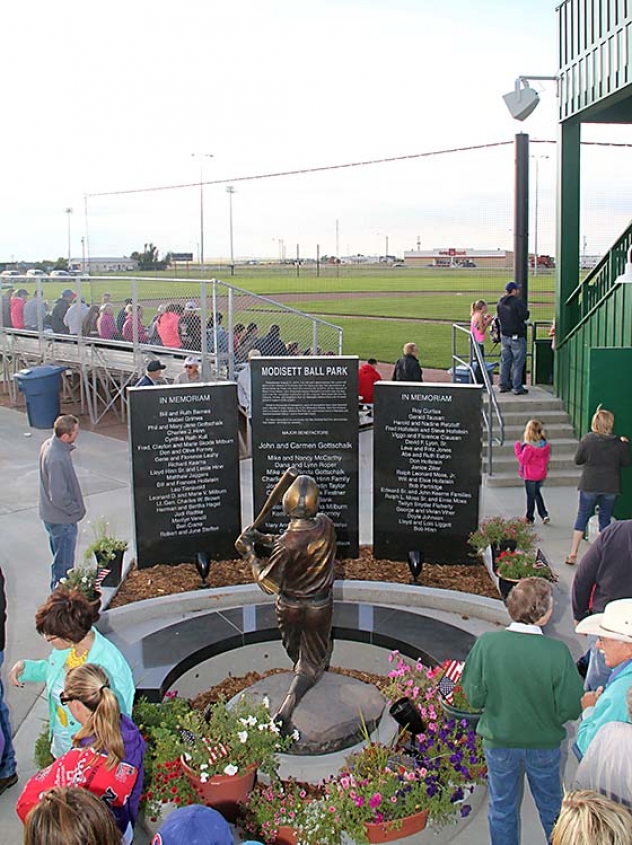 At one time, it was said that Modisett Ball Park was the finest in all of western Nebraska, but during its re-dedication Sunday night, those in attendance wouldn’t have traded it for any other park in the world. Approaching the ball park gave a person the feeling of such nostalgia that I almost expected to see a 20-year-old Hank Aaron step up to the plate. No detail was neglected, no matter how minute, which only added to the sensation of stepping back in time. As you can see in many of the color photos on our website, it’s hard to discern whether they are an artist’s rendering or reality.

The day started with a brief session at the Rushville American Legion, where donors were thanked for their help. Mayor Chris Heiser again thanked all of the donors, the steering committee, and John and Carmen Gottschalk for making this dream a reality and keeping him going. John Gottschalk thanked everyone and said, “This ball park, I’m hoping will be a catalyst for a reinvigorment of this community’s long-standing legacy of getting things done, which made it a great place to live and a great place to grow up. The city council has committed to take a good strategic look at the town, to survey and document its assets. To have a good discussion within the community about what’s most important here to the well-being and life in this community - safety, children, education, things that you need to have a good place - and then, to perhaps focus on that, and begin a fund for the city so that subsequent projects that need to be done here can be done here. If all that works, then I think you’ll see some repeats of this kind of thing, because if this has helped any way at all to demonstrate that you control more of your future than you ever thought you did, then I hope it lasts a long time.”

The steering committee then presented John and Carmen with a special plaque, made from the wood of the original grandstands, as a token of their appreciation. From there things moved out to the ball park, where the new donor plaza - three stone pillars inscribed with the names of the primary donors, and a custom bronze statue - was unveiled. Gottschalk explained that the backs of the pillars are blank, with hope that they will someday be filled with the names of future donors to the City of Rushville. Fans were then treated to a meal of free hotdogs and given some time to admire the ball park.

When it was time to play ball, both teams lined the baselines and some special guest speakers  stepped out to say a few words. Dale Henricks spoke of his time at Modisett Ball Park, playing during the Braves Camps. Henricks was eventually signed by the Braves. While he never went pro, he had a good showing in the minors.

Jeanie Leahy, daughter of Gene Leahy, whom was instrumental in getting the Braves to come to Modisett back in the ‘50s, also spoke. She commended Rushville for its dedication back then and now.

John Tausan of Chadron was the final guest speaker. He coached at Modisett many times, and left the crowd with three simple words...“Rushville, Modisett, Baseball - no one can be said without the other two.”

John and Carmen spoke next, thanking everyone for coming out and supporting the project. John finished by saying, “This is a field of competition. It’s a field of focus, a field of excellence. It’s a field of striving, a field of victory, and on occasion, a field of defeat. It’s a great place for our children to learn some very important things. Carmen and I are proud to have played a role in adding extra innings to Modisett Ball Park, and to Rushville as well."

It was a very emotional night for everyone involved in this project. “It feels great to be done,” said Rushville Mayor Chris Heiser. “Now it’s going to be great to start using it on a regular basis next year. It’s great!”

Steering committee member Chuck Hinn stated, “This has been a very moving experience for all of us, and we can’t tell John and Carmen thank you enough, because without them, we wouldn’t have this. We’ve all worked very hard. It’s something that Rushville and the surrounding communities should be very proud of.”

“It feels really good, and I’m real proud,” Hinn added. “It’s one of the most rewarding projects I’ve ever worked on.”

The back of the program sums things up nicely. It reads: “Modisett Ball Park - Rededicated, August 31, 2014, this ball park demonstrates the sustained spirit of the citizens of Rushville and the legacy of over five generations of stewardship by those who built this community. In 2013, at the request of Mayor Chris Heiser, John Gottschalk stepped forward to provide major funding and lead the complete replication of the original 1940 Modisett facility. Citizens and friends and neighbors from 21 Nebraska communities and 14 states joined in support of the project.

Home to thousands of youngsters, years of competitive town team baseball and a decade of major league use by the Milwaukee Braves, New York Yankees, and Los Angeles Angels, Modisett Ball Park has a permanent home in Nebraska and national baseball history ~ and in Rushville’s heart.

For future stewards of the community, this New Modisett Ball Park demonstrates that indeed, All Things Are Possible!”

A book is currently being written by Jeff Barnes, which will cover the history and renovation of Modisett Ball Park.