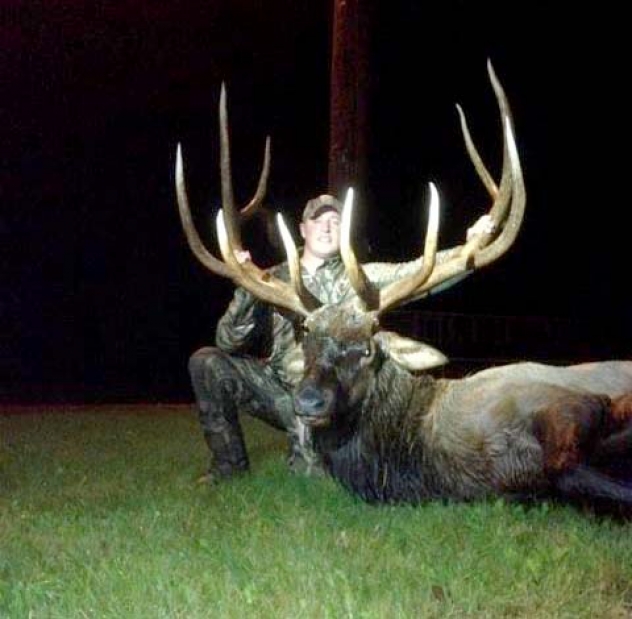 Justin Weaver poses with his Elk, which rough scored at 394. Photo submitted

Justin Weaver of Gordon has been hunting for as long as he can remember, but this year, Weaver was drawn for an elk hunting tag.

“I went out several times by myself and called a lot of nice elk in that most people would probably shoot, and we had pictures of this elk before I ended up getting him, so I knew what was up there. I had taken videos of quite a few elk and people called me crazy for not shooting them. The ones I was seeing were nice, but not nice enough for a once in a lifetime tag. I’m glad I held out for him,” Weaver proudly stated.

This particular hunt went on for eight days. On the day of the kill, September 29, 2014, Weaver was actually guiding a fellow hunter. Around 3 p.m., he went out for his own personal hunt.

Hiding in trees and calling for them, Weaver could hear the elk bugling, but couldn’t actually see him. The bull had a couple of cows with him that Weaver could see, but the male stayed hidden for quite some time. Some smaller bulls came in, but they weren’t what he wanted.

Weaver and his hunting buddy Justin Simmons started off over a hill. At this point it started to rain. About twenty minutes before dark the bull elk showed himself, about 250 yards away, and with his 7mm rifle Weaver took a shot and nailed him.

With a rough score of 394 this could be in the top three in the state, but Weaver won’t know for sure for about 90 days. The meat has all been cut up, the hide is being tanned and the head will be a shoulder mount. “I was pretty lucky to have my name drawn and it ended up working out for the best,” Weaver said.

More in this category: « Rushville gets a taste of ink Nowak and Roberts crowned Hay Springs Homecoming King and Queen »