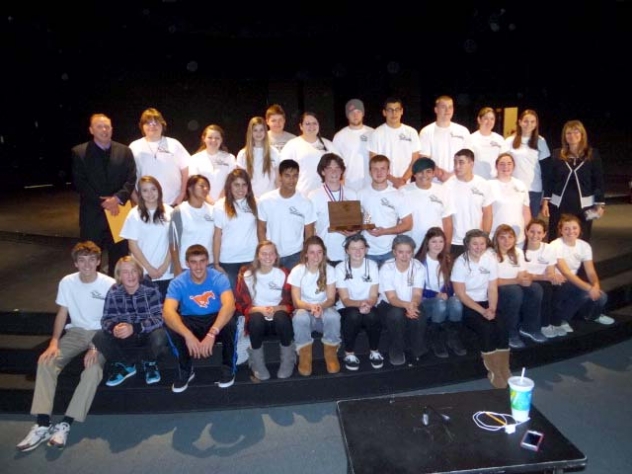 The G-R One Act team won the Western Trail Conference with their play “He Lives On.” Photo submitted

For the last ten years, the One Act play has won Western Trails Conference every year but one. This year was in keeping with past victories. The play “He Lives On” written by Candie Johnson and musically enhanced by Ryan Lovell rocked the audience to their core. One judge stated it best with her comment written on the top of her critique sheet: “Kids, you moved souls today – know that!” The play was rated first by all three judges. One judge gave a perfect score and the other two judges took one point off. Nine students received acting awards: Dillon Holeman, Kaden Russel, Logan Gilchrist, Cassidy Bruns, Jennaya Hill, Rylan Hurd, Kate Orr, Tristan Tuma and Brice Stangle. Kaden Russel also received the over-all best actor award. This cast and crew gave a powerful performance and truly deserved the trophy they once again brought back home.