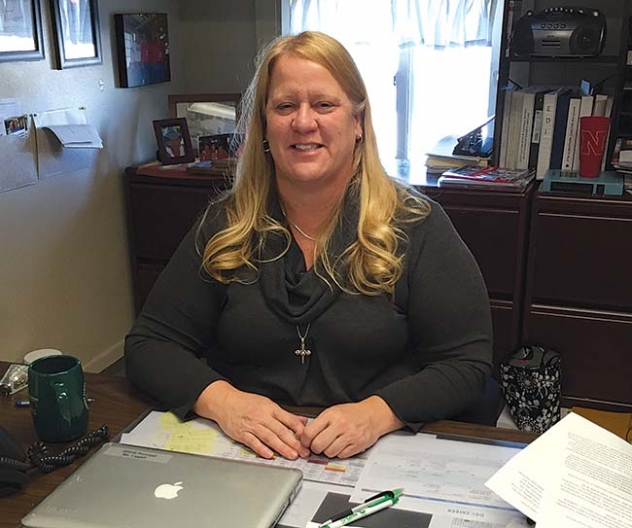 Lori Liggett sits at her desk in the Gordon-Rushville High School Principal’s office, where she will remain for the rest of the school year. Photo by Jordan Huether

There will be a familiar face behind the Gordon-Rushville superintendent’s desk next year as current principal Lori Liggett has been tasked with succeeding Merrell Nelsen as superintendent of School District No. 81-0010.

Liggett has spent nearly her entire teaching career in the district. After graduating from Chadron State College in 1984, she taught one year at a rural Cherry County school, then came to Gordon in ‘85. She taught seventh and eighth grade science for 18 years on the third floor of the school, then moved to the second floor, where she taught computers and served as the school’s Athletic Director. In 2006, Liggett was hired as principal of the high school. Now she’s ready to move across the hall to the superintendent’s office.

It all started thirty years ago with a card game. A native of Alliance, Liggett’s parents decided to retire in Rushville. During a card game with the superintendent’s secretary it was mentioned that the school was looking for a science teacher. Her parents volunteered her for the job and soon after, Liggett started her tenure here.

“Gordon and Rushville are great communities,” she said. “I’m a firm believer in ‘you have to want to be here.’ I came here out of college, was going to stay for a year, and I’ve been here for thirty. These people kind of grow on you.”

Liggett will officially take over as superintendent in July, but has been busy learning everything she can from Nelsen while he’s here. “He’s been great. The district was very fortunate to get him when they did,” said Liggett. “He’s done a lot for the district financially and I’ve learned a ton from him about the budget and financial situation, grants and things like that. I’m very glad I got to do that.”

To qualify for the position, Liggett recently earned her Specialist Degree from Wayne State College.

The school district is now in the process of finding a new high school principal.