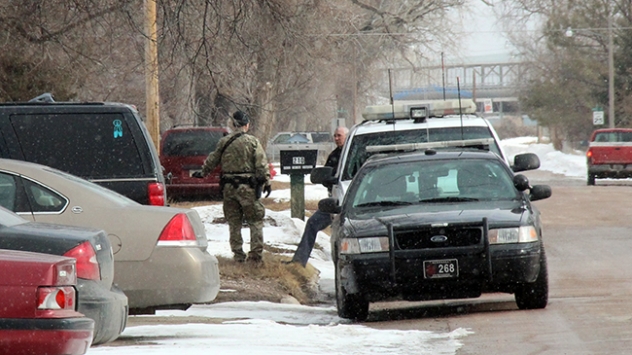 The manhunt in Gordon has ended with the capture of Michael Brown, 18, on Thursday afternoon by Gordon Police officers, according to Officer Scott Darling.

Officers were tipped off by community members that Brown was staying in a residence in Gordon. Gordon Police Chief Jeff Brewer and officer Scott Downing arrived at the residence at 2:45 p.m. with a warrant to search it. The homeowners agreed to the search and Brewer and Downing found Brown. Brown was arrested peacefully, ending a two day long manhunt that started when Brown escaped from police custody.

Around 5:30 a.m. on Wednesday officers arrived at a house on Ash street with a warrant to search the house for stolen property. The property was found and potential suspects were separated for questioning. Since the house was too small to effectively separate the suspects, two of the suspects, Brown and a female, were taken to a patrol car for Chief Brewer to question.

During questioning the female suspect told Brewer about additional stolen goods and he left with her to look for it, leaving Brown handcuffed in the patrol car. Brewer said that he was gone for three minutes. When he returned Brown had kicked out the back window and escaped.

The police began a manhunt in Gordon, receiving help from the Sheriff’s department and a K-9 unit and troopers from the State Patrol, but Brown was not found.

Brown is alleged to be involved in an attempted entry at Petersen Seed, breaking into three vehicles at Farmer’s Coop, break-ins at the Sheridan Lounge and the American Legion, as well as car thefts.

More in this category: « Liggett to be Gordon-Rushville’s next superintendent LightShine Canine: Healing Souls One Dog at a Time »