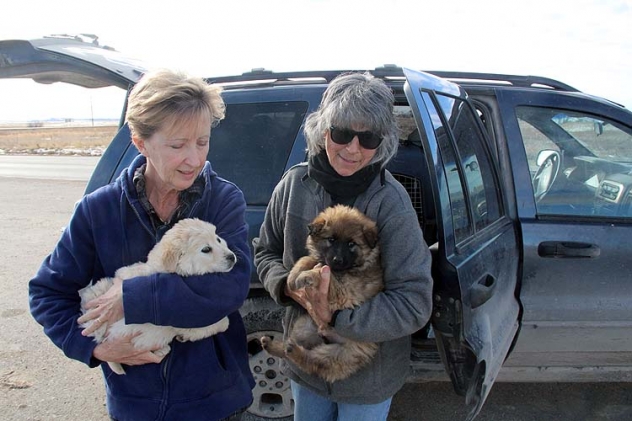 It’s about 1:45 p.m. Friday on the Pine Ridge Indian Reservation and Jean Parker and KC Willis of LightShine Canine are parked on the side of the highway, trading puppies.

The three puppies in Parker’s Jeep she picked up from a local. They need their shots.

The three puppies in Willis’s van were found by a local volunteer in a dump. The volunteer had spent most of the morning chasing the puppies. That they were caught at all is a minor miracle.

During the trade a van pulls over. The occupants, two men and a woman, local residents, tell us that they have a litter of puppies that need rescued.

Willis is feeling sick, so Parker follows the van in her Jeep. The back of the Jeep is stuffed with dog blankets, bags of food, and kennels. The three dump puppies go into one of these and are soon asleep.

On the way there, Parker tells me that she and Willis make a habit of exchanging dogs at the same place. People see them, know who they are, and stop to tell them about dogs that need help. It’s pretty common.

We follow the van to some rez housing northwest of Wounded Knee. Cars are propped up on blocks of wood, trash on the street. The dirt road is poorly maintained.

We reach the destination. Parker buys a dreamcatcher from one of the men while the woman goes under the porch. The puppies, we learn, were born this morning.

Parker and the woman pass out the newborn puppies and put them in a kennel. The mother, a black and white stray the woman had found a few days ago, is fat and needs coaxing to get out from under the porch and into the kennel with it’s litter.

“I just want them to have a good home,” the woman says. “I don’t want them to stay here and not get taken care of.” It’s unusual, Parker tells me, for someone to let puppies go so soon. They usually want to keep them until the puppies get older.

Jean Parker has been rescuing dogs for awhile now. It started after she moved to Gordon nearly 30 years ago, when she found a stray dog hanging around the grocery store. “Nobody claimed it, said it’d been there for two or three days, so I brought it home and I just started bringing them all home,” she said. “And somebody said if you really want to rescue them, go to the rez.”

So she started taking reservation dogs in. About three to five hundred dogs a year, sending them to a rescue organization in Colorado. She did this alone for years until she reached the point where she was ready to either give up dog rescue or ranching. That’s when she met KC Willis.

“I was on the reservation with a program called Grandmothers for Grandmother about four years ago, just helping a group of grandmothers who were taking care of multiple grandchildren,” Willis said. “And that took me around Pine Ridge. And of course I’d seen the dogs, but I didn’t know what to do. One day I was in White Clay, and there was a dog on a front porch that I was feeding when I’d stop by. And one of the street guys was passed out on the front steps and this dog I’d been feeding, and it shows up not looking good at all, and I said out loud to that dog, ‘I don’t know what to do.’ And the guy sat straight up and he said, ‘There’s a lady in Gordon that will take him.’ I made a couple of phone calls and by the end of the day I took that dog to Jean Parker.

“It was the grandmothers who, when I apologized for helping a dog, a grandmother shook a finger in my face and said, ‘Don’t ever let people tell you that helping the dogs isn’t helping us, because it is. When you take this puppy out of my front yard that’s starving, that I can’t take care of, you are relieving my heart. You are removing a visible sign of helplessness, because all of these puppies represent the chaos that my community is in, that this is okay.’”

Parker knows some people who need blankets and dog food, so we ride awhile, stopping at homes to leave supplies. She says that in the past few weeks, LightShine Canine has handed out a thousand pounds of dog food a week. As she drives, we listen to one of the newborn puppies cry. It’s a high pitched whine, terrified. Parker knows which one it is. It was already cold and stiff when she had taken it from under the porch. It probably won’t make it. So we ride on and listen to the puppy die.

At one of the stops there’s a propped car missing a wheel, and a dog guarding it. It growls as Parker approaches. “Must be where her puppies are,” Parker says, and she dumps some dog food next to the car.

There’s some cats near the house too, and she leaves them some food up high where the dogs can’t reach. She leaves the rest of the bag and some blankets at the door and we leave.

“Most people think I’m just this crazy dog lady that lives down on the Niobrara,” Parker says and laughs. “I do a lot of owner relinquish in the Gordon area, people who call and they have to move or they’ve got an elderly relative who died and they can’t keep the dog. I’ll help find homes for those dogs or take the dog if they’re in a bind. But in the first 25 years I did it very quietly.”

In the beginning she paid for everything out of pocket. “Before we were getting donations, I just paid for it,” she said. “It was just something I did because it’s what I believed in. Buy dog food instead of new vehicles or clothes.”

“Fifty percent or more of the dogs we rescue are because Lakota got involved,” Willis said. “Don’t let anybody tell you that there aren’t animal lovers out on the reservation because there are.

“There’s two levels of volunteers who help us. There’s the Lakota who actively look for dogs, actively rescue them. They have been supplied with food, with crates, sometimes outdoor kennels. They are out in the community looking for animals in trouble and bringing them to us. And then there are Lakota eyes and ears all around the community who maybe aren’t actively rescuing for us, but know how to contact us, tell us ‘hey, there’s a puppy at the dump, ‘hey there’s a puppy on the road, we picked it up and it’s at my house.’ They’re not out looking for dogs, but they will pick up dogs and give them to us. And there are those friends of ours who will tell people, ‘Hey Grandma, that litter under your porch, I know who I can call.’”

“What I think people don’t understand in our area, and especially after what happened to Jayla [Rodriguez], is the huge number of good dogs that are in harm’s way,” Parker said.

“We’re not taking the aggressive ones, the ones that are going to bite somebody’s kid or kill somebody’s chihuahua. The rescues we send them to are amazed by the loyalty and intelligence and the strength of these dogs.”

The final stop of the afternoon is at a teacher’s house in Porcupine, S.D. The teacher had called Parker, told her she found an old dog in bad shape, and was keeping it in her garage.

We go and get it, but there’s a hitch: the dog doesn’t want to come. And he’s big enough for that to be a problem.

He doesn’t bite, and he doesn’t bark. He whines and it’s reminiscent of the dying puppy. But Parker manages to get him in the vehicle. For the rest of the ride he whines, trying to escape. He doesn’t quiet down until we reach the Nebraska border.

Parker said, “When you get a dog that somebody really loves but they can’t keep, or you’re giving them supplies to help with that dog, you’re helping the person. And to be able to help the people that way, and to actually be able to get a dog that, y’know, maybe I’ve got a stray that has never known a full stomach or a warm night, or a kind, gentle touch, and to be able to take that dog and get it to a home where it’s loved and appreciated and it adds to the person’s life on the other end, it seems like a win-win for everybody. Because dogs are such amazing animals and such healing animals.”

“Dogs are just good for the soul.”