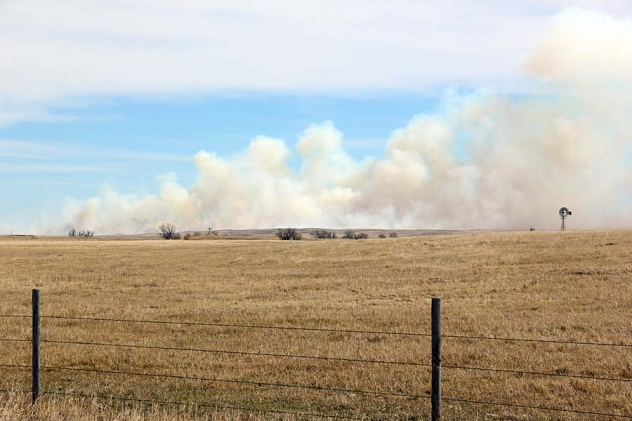 A fire south of Gordon Monday afternoon burned over 1,500 acres before being contained around 5 p.m. Photo by Jordan Huether

Gordon Fire Department Chief Richard Haller said that the wind was the biggest challenge in getting the fire under control. “It was a matter of getting enough help there to get around it,” he said, “because it wouldn’t go out.”

The Gordon Fire Department got the call at 1:00 p.m. and called in the Rushville, Merriman and Hay Springs departments. The fire spread over 1,500-2,000 acres by 5:00 p.m., when the fire was contained. The only damage was done to a little shed with nothing in it. No one was hurt.

Haller said that landowners need to get their windmill’s going. “If the weather doesn’t change, there’s going to be more [fires]. There’s a lot of dry grass out there,” he said.

Haller thanked Eric Anderson and Vic Baseggio for using their tractors to help fight the fire.