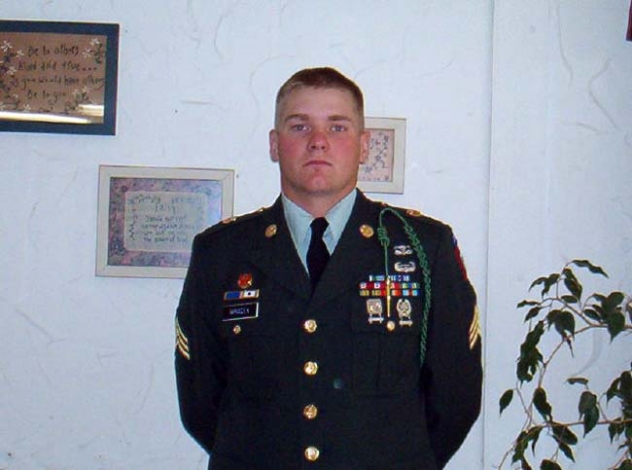 Sgt. Corey Mracek was killed in an improvised explosive device attack on Jan. 27 near Iskandariyah. Photo from iraqwarheroes.org

The Chadron Post Office will hold a special ceremony on Friday, April 17, as the post office will be named in honor of Chadron native and Hay Springs graduate Sergeant Cory Mracek.

Mracek attended Chadron State College before he joined the 1057th National Guard. He entered into active service in 1996, serving a year in Korea and three  years at Ft. Campbell, Ky. He left the Army to return to Chadron, serving in the 1057th until 9/11. After the attacks, he decided that his country needed him and he re-enlisted in the U.S. Army, and served as a paratrooper with the 82nd Airborne Division.

He was deployed in Iraq in January, 2004. On Jan. 27, Sgt. Mracek, 2nd Lt. Luke James of Oklahoma and SSG Lester Kinney of Ohio were killed by an improvised explosive device. Mracek was 26, and was posthumously awarded the Purple Heart and Bronze Star.

Nebraska Senators Deb Fischer and Mike Johanns introduced legislation to name the post office after Sgt. Mracek in September 2013, which was signed into law in November, 2014.

The ceremony on Friday, which will start at 2 p.m. at the post office, will feature the unveiling of a plaque in Sgt. Mracek’s honor. Attendees will include the Mracek family, members of the 82nd Airborne, and Rep. Adrian Smith. The public is invited to join them in remembering Sgt. Mracek and all who have served their country.