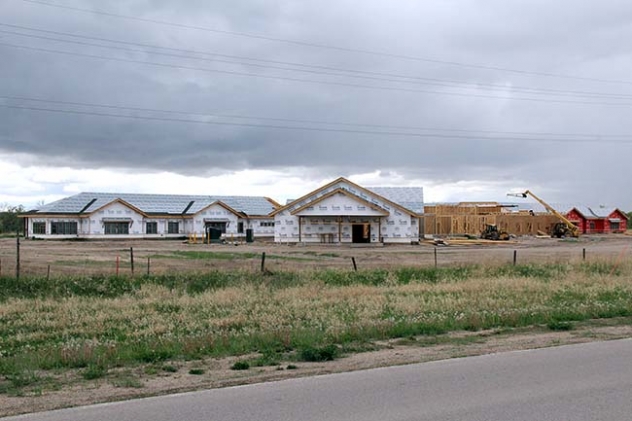 Construction is again underway on the nursing home in Whiteclay. Photo by Mark Gaschler

Construction has resumed on the Whiteclay nursing home after a three year delay.

Work began again at the end of 2014 and kept going through the winter, according to Oglala Sioux Tribe Public Relations Specialist Kevin Steele. Steele said that construction was nearing completion, with inside furnishing being done. The facility is expected to open in the fall, although no date has yet been set. The construction is being completed by RM Rangel Inc. of Rapid City.

“This is a good thing for the elderly,” Steele said. “Everyone is looking forward to it, and that’s the main thing.”

Initial construction for the $16 million, 60 room facility started in 2011. At the time it was expected to open in 2012. Steele said construction was delayed by a change in tribal administration, and by a controversy caused by an individual who many felt would not be responsible with the project’s funds.

Bruce BonFluer of Lakota Hope in Whiteclay said that he was excited to see the project running again after the delay. “It’s awesome to see it happen,” he said. “There’s been a real need for it in this area.”

Sheridan County Commissioner Dan Kling was hopeful that the nursing home would help the reservation. “I think it’s safe to say that we are all completely encourage and support it,” he said.

The facility is expected to employ 75 to 100 people upon completion. The facility will be fully owned and operated by the Oglala Sioux Tribe, and is being built on tribal lands in Nebraska.