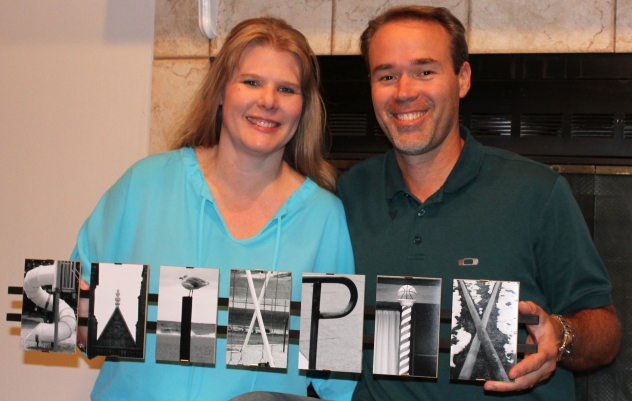 About ten years ago, Lori Swick got into photography: specifically, letter photography, where she would try to find letters in the shapes and negative spaces in the world. She also wanted some way to display her work. The problem, she found, was that the matted frames available to her were too expensive to affordably frame her pictures as words. So she turned to her husband.

Nathan Swick, a 1991 graduate of Gordon High School who now teaches high school engineering in Maryland, developed a special frame using wooden bars, wooden backers, and glass. It was a simple design that made it easy to display 4x6 photos in a row.

It was a simple and effective idea, and friends soon began asking for Nathan to build something for them. “From there it started to become bigger,” Nathan said during a phone interview.

“I told her I would never attend to a craft show,” he added, laughing, “and actually we go to craft shows all the time now.”

The frames grew in popularity, and the couple formed Swix Pix, a company to build and distribute the frames and photographs. They sell the frames both on their website, swixpix.com, and the frames are even sold by some select retail stores like HomeGoods and Barnes & Noble.

As the frames got more popular in the first five years, Swick patented the frame, receiving the design and utility patents. “When I created the frame, I noticed almost no one else had that type of frame out there,” he said. “And I’m like, if this gets big I’m going to want a patent.”

Over time, the Swicks have taken more and more pictures as they travel, building a library of photos for each letter. These include photos taken in the Black Hills, at Nathan’s parents’ farm on the South Dakota border and in Gordon.