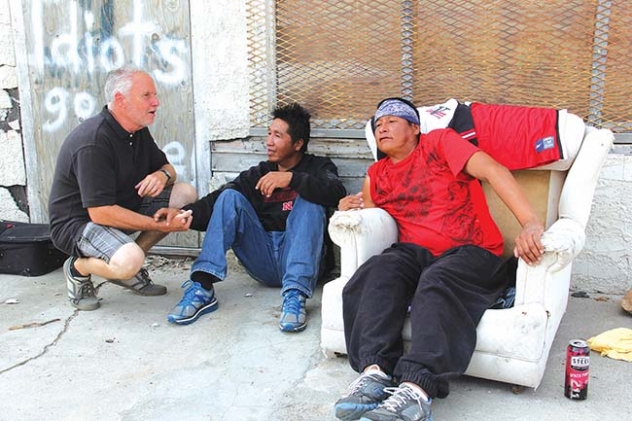 Bruce BonFleur of Lakota Hope Ministries visits with two men on the streets of Whiteclay. BonFleur told the commissioners, “We believe in business rights, but we also believe, more so, one step above that are human rights, and there’s human suffering, and squalor, and public health issues, everything else going on in that place.” Photo by Jordan Huether

Moss, a native of Whiteclay, said the town has always had street people, but in the past they were few in number and “basically harmless.”

“Today, we have sometimes in excess of 60 people hanging out daily,” Moss said. “They’re younger... they’re violent. I never considered [Whiteclay] to be a dangerous place, but it is now. It’s a dangerous place. You got somebody panhandling in your parking lot, you go out there and tell them to leave a hundred times a day. They might leave a couple times but sometimes you’re going to get threatened with violence or they’re going to threaten to burn your business down. It’s just kind of crazy... It’s a very hostile work environment.”

On one occasion, Moss said, his wife told some people loitering outside the grocery store to leave. One of them followed her into the store, yelling at her and acting very aggressively. Moss jumped in between them and told the man to go outside. He refused, and stood in the door, blocking it. Moss’s wife called the sheriff’s office about the incident. “[I tell him] you’re probably going to go to jail, the cops are coming,” Moss said. “‘I don’t care, I’ll wait for them.’ He’s very adamant about not leaving. I told him if he wants to wait, he can wait, that’s fine, just stand over by the mail boxes, but nope, right in front of the door, people can’t go in or out, blocking my traffic. I had three people come over to me and say, ‘Do you want me to handle this fellow for you?’ and I said, ‘No the police will be here to help.’”

When a deputy arrived, Moss said, the man left the store. Moss saw the deputy speak with the man and leave. “Instead of even coming in and asking what’s the problem, what’s the deal, he’s over talking to the guy,” he said. “Then next thing we know, the deputy’s just gone. He’s out of town, and the guy’s still there. And I’m thinking, well gee, it’s kind of odd they wouldn’t come and talk to the person who basically had the complaint and see what the deal was.... And it seems like we get that a lot. We call, and people come, and nothing happens, and why that is, I can’t say.”

He has also had a few vendors refuse to make deliveries at his store due to the harassment they get.

Moss said that he is daily cleaning up blood, excrement and urine around his building. “Sometimes you literally can’t be in the office from the smell of people doing their business right there,” he said.

He hopes that the meeting will begin the process of enforcing the law to some degree in Whiteclay.

Sheriff Terry Robbins said that he would require three more deputies to have an officer in Whiteclay, but doubted it would have much effect. “It might slow it down, but it’s not going to change it,” he said, because of the sheer number of offenses.

When asked if the county could pass a statute banning public intoxication or panhandling, Commissioner Dan Kling said they could not. Cities are allowed to pass ordinances, but only the state Legislature can pass statutes.

Moss and Kling doubted that banning alcohol sales in Whiteclay would solve anything, either.

“Moving the alcohol just moves the problem, it doesn’t change it,” Kling said. “The other thing that’s changed, though, is the other substance abuse. The violence, the sheer numbers, I don’t know why that seems to grow.”

Bruce BonFleur of Lakota Hope Ministries said that the issues in town are all covered by regulations from the Nebraska Liquor Commission that are not being followed. He pointed out that Lakota Hope has never participated in protests against the liquor stores in Whiteclay, since they believe in free enterprise. “We believe in business rights,” he said. “But we also believe, more so, one step above that are human rights, and there’s human suffering, and squalor, and public health issues, everything else going on in that place.”

BonFleur said that the Liquor Commission has failed to review the situation in Whiteclay. “You have to be able to show that there’s adequate law enforcement to have what you have in Whiteclay, and there’s no way...” he said. “The laws are not being enforced, the laws that can be enforced right now.”

BonFleur said that, under the Keep America Beautiful guidelines, the entirety of Whiteclay is considered a dump. BonFleur said they had even estimated the amount of bodily fluids that end up on Whiteclay’s streets every year. “Conservatively, very conservatively, based on how much urine goes onto the streets of Whiteclay, it’s the equivalent of 33,000 two liter bottles of urine,” he said.

He also highlighted that alcoholism is considered a mental illness in Nebraska, and that several of the street people are veterans, and that the county and town are obligated to help them. Because of their condition, he said, they are physically incapable of understanding what it means when they’re told to leave someone’s property.

Whiteclay also has an issue with abandoned homes and unmaintained property, which serve as hiding places and, since they are private property, allow people to drink without violating open container laws. They also represent a fire hazard, as some of them have already burned down and have yet to be cleaned.

BonFleur also said that conditions in Whiteclay are keeping out potential businesses like furniture stores and laundromats that can use close proximity to the Pine Ridge Reservation. “People look at the money that comes from beer sales, and in my mind? That’s miniscule,” he said. “That’s a drop in the bucket in comparison to what could be there.”

The commissioners want to get a plan in place soon to cover the issue. Gov. Pete Ricketts has shown recent interest in Whiteclay, and Commissioner James Krotz said he wants the county to take advantage of the governor’s attention that while they can. The commissioners asked Moss and the rest of the audience to return for the commissioners meeting on Nov. 9 to discuss further. They will also be inviting the property owners in Whiteclay to attend as well.