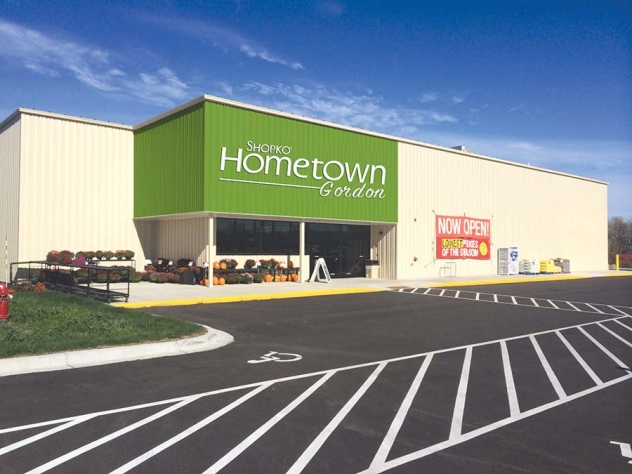 An example of what Gordon's Shopko will likely look like

Several meetings were held on a momentous Thursday evening in Gordon, Nebraska – the results of which would determine whether or not Gordon would soon be home to a new Shopko store.

At 5 p.m., the Gordon Planning Commission met to decide whether or not to recommend that the city council declare a section of land, which includes the old Bomgaars building, substandard and blighted. Attorney Mike Bacon of Gothenberg was present to explain the implications of the designation and answer questions. Bacon explained that, contrary to how it sounds, the designation is actually beneficial to all property owners within the designated area. The designation does not appear on the deed and does not affect property values negatively, but does open the owners up to Tax Increment Financing (TIF) opportunities.

The designation was necessary for the city to receive TIF funds on the old Bomgaars property. These TIF funds, in the amount of $250,000, would be a bond from the city, which they would give to KTJ 283, LLC to purchase the property.

The current tax valuation of the property would be frozen at its current level for the next ten years, with all current taxing entities receiving the same amounts as before. Any additional tax revenue from the property over the next ten years will go toward paying off the bond. After the ten-year period or once the bond is paid off, whichever is sooner, all taxes will be collected normally. Bacon said the tax would not be levied on any other citizens.

Brian Smith, a Project Manager with KTJ, was also present to answer any questions specific to the Shopko project. According to Smith, KTJ plans to tear down the existing 15,000 square foot structure, starting around April 19, 2016. The new building will be 25,800 square feet, and will be set back further with an asphalt parking lot in front. The total cost of the project is estimated to be $3,900,000. A Phase 1 study has already been completed on the property. An example of what the new building will likely look like is pictured.

Bacon told the Planning Commission and the City Council that the building would be open by Black Friday, with a targeted completion date of the first or second week of October.

After some discussion of the consequences of the Blighted and Substandard designation on other property owners, the Commission voted unanimously to recommend it to the council. City Manager Jacob Sheridan stated that there were no intentions by the city to use the designation for any other properties beyond the Shopko property.

The Gordon City Council convened at 6 p.m., covering a wide variety of issues before addressing the issues related to the new Shopko at the set time of 7 p.m. Mayor Nancy Russell was absent.

With no public comments, the council closed the hearing and voted unanimously to declare the area blighted and substandard.

Cookston told the city council that there were instances around the country where corporations came into small towns, ran other local businesses out, then decided it wasn’t profitable enough and left. “I’m not against a store, but consider the consequences of them pulling a pharmacy into this area, and possibly not taking care of the patients in need as well as we could in the community,” Cookston said.

Tim Bounous said he would continue to shop at the hometown pharmacy, even if Shopko were to have one of their own, and that he felt a lot of other people would too. Both Bacon and Smith stated they had not been told whether the Gordon store would contain a pharmacy or not.

The public hearing was closed and the city council voted unanimously to approve the redevelopment plan. With no further business, the city council adjourned. They then had to re-convene as the CDA to issue the tax increment revenue bond. Bacon reminded the council that he was working for the city, not the developer or Shopko, and that everything he put together was in the best interest of the city. The council voted unanimously to issue the bond. Bacon added that the developer has agreed to pay all the fees, including the city’s attorney fees and PADD fees.

Smith stated that, now that everything has been taken care of with the city, they should be demolishing the building by the middle of this week.

For the complete minutes of the meetings, please turn to pages B4 and B5 in the April 20, 2016 issue of the Sheridan County Journal Star, or on our website under the Legals tab.