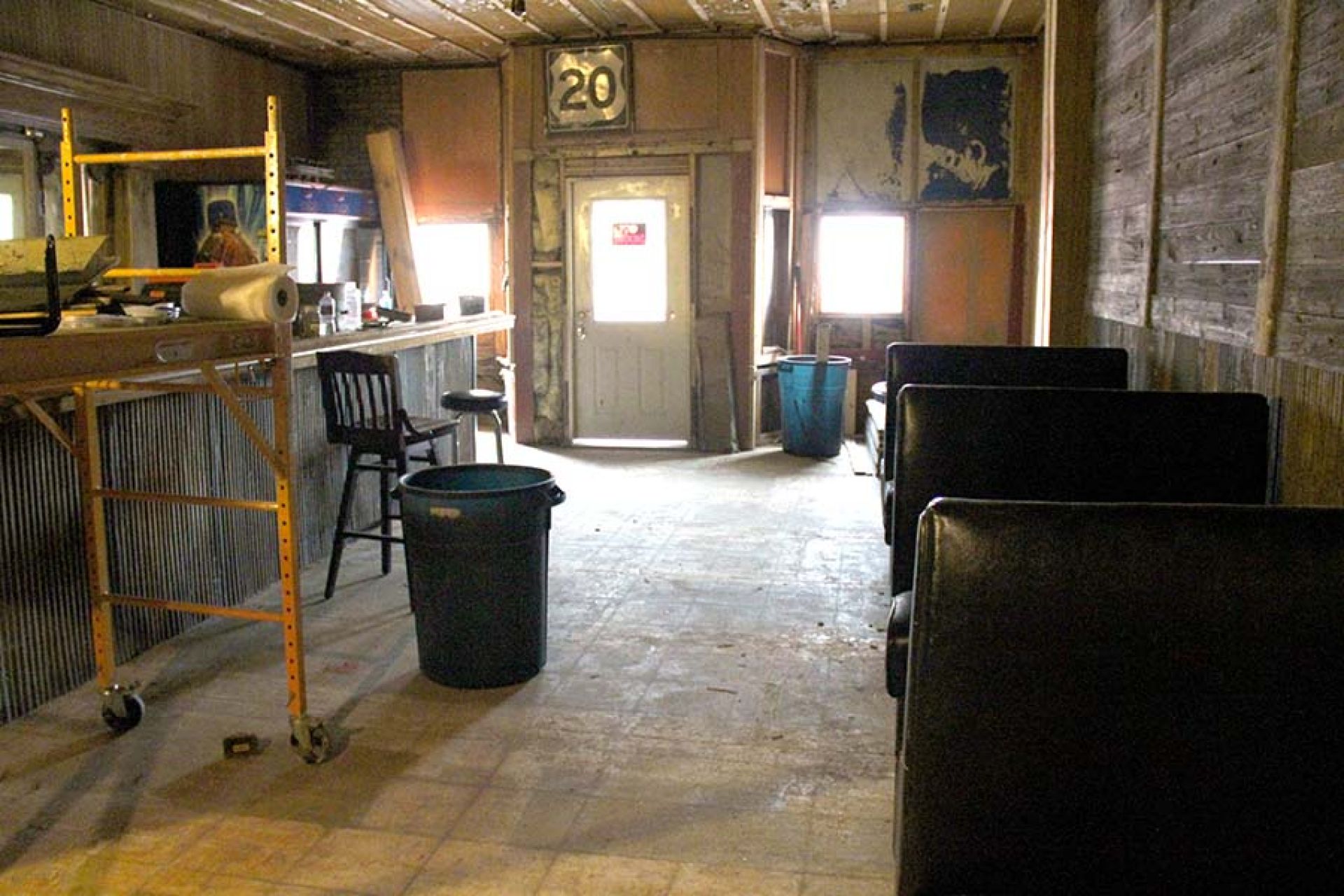 The bar and sitting area at The 20 Bar in Rushville, Neb.

A place to hangout with family and friends is what owners Ryan Baker and Carmen Ruiz hope The 20 Bar will be for Rushville and the surrounding communities. They had looked into other buildings in Gordon, but settled on The 20 Bar since  that was where Ruiz attended grade school and high school and it was near their home.

After purchasing the bar, they received support from Rushville and surrounding area residents. With the renovation underway, Baker hopes the bar will open before Fun Days. “We’re thinking the last week of August or first week of September we’re open,” said Baker.

The list of to-do’s remains  the challenge to meet that opening time frame. They are fixing the ceiling, walls, floor, bathrooms, bar top, lighting and adding a roof over the outdoor patio. He plans to sand down the bar and jack up the foundation underneath the bar that continues to sink. During the construction, the windows and doors will be covered and shut to keep the design a secret for opening day. Ruiz said the color scheme for the bar includes: turqoise, white, black, and barn wood. She describes it as rustic, shabby chic.

The layout will change in the back, with the bathrooms in a north to south orientation against the west wall, instead of east to west, and the storage removed to allow more space for customers to play pool and foosball. “People were always complaining about that,” Baker said. “I think that it was a little bit small back there to play pool.”

For handicapped customers unable to use the front stairs, access to the building is from the back patio where there is a ramp.

Once The 20 Bar opens, “I would like to do something every day. Some kind of special,” said Baker. There will be homemade Mexican and regular food specials on Wednesdays, Saturdays and Sundays, tentatively at 11 a.m. Ruiz said their specials will be meatloaf and an enchiladas plate with rice and beans. Other menu items are burritos, tacos, nachos and chips and salsa. The bar will serve mixed drinks and beer.

Children are allowed in the front section of the bar until 9 p.m. Doing so will make it easier for employees to prevent underaged drinking on the patio areas as well as reduce the traffic near the pool and foosball tables. There will also be a smoking area on the patio for customers.

The fire marshal approved the hood over the kitchen and the state patrol inspected the storage. The fire marshal said the space capacity was able to hold 50 people inside and 80 people outside.

On June 27, the Rushville City Council approved a liquor license for The 20 Bar. Now it heads to the state for approval. The waiting game for the liquor license is a speed bump Ruiz is concerned about. Without the license, they cannot contact nor order liquor from vendors, but she anticipates hearing from the state by the first of August.

As Baker’s construction business remains busy throughout the summer, he works on The 20 Bar in the evenings, especially on nights when he gets off work early. Ruiz works at the Pine Ridge Hospital and plans to change her hours so she can help prep the space to save her husband time.

Ruiz is excited about the pizza parlor (Twisted Turtle) set to open in Rushville to offer variety. “The more variety you can bring to the town, the more you’re helping the town,” she said.

The 20 Bar sits on the historic Highway 20, which is the longest coast-to-coast highway in the United States, spanning 3,365 miles.

“The community needs it again,” said Baker. “It will be good for them.”