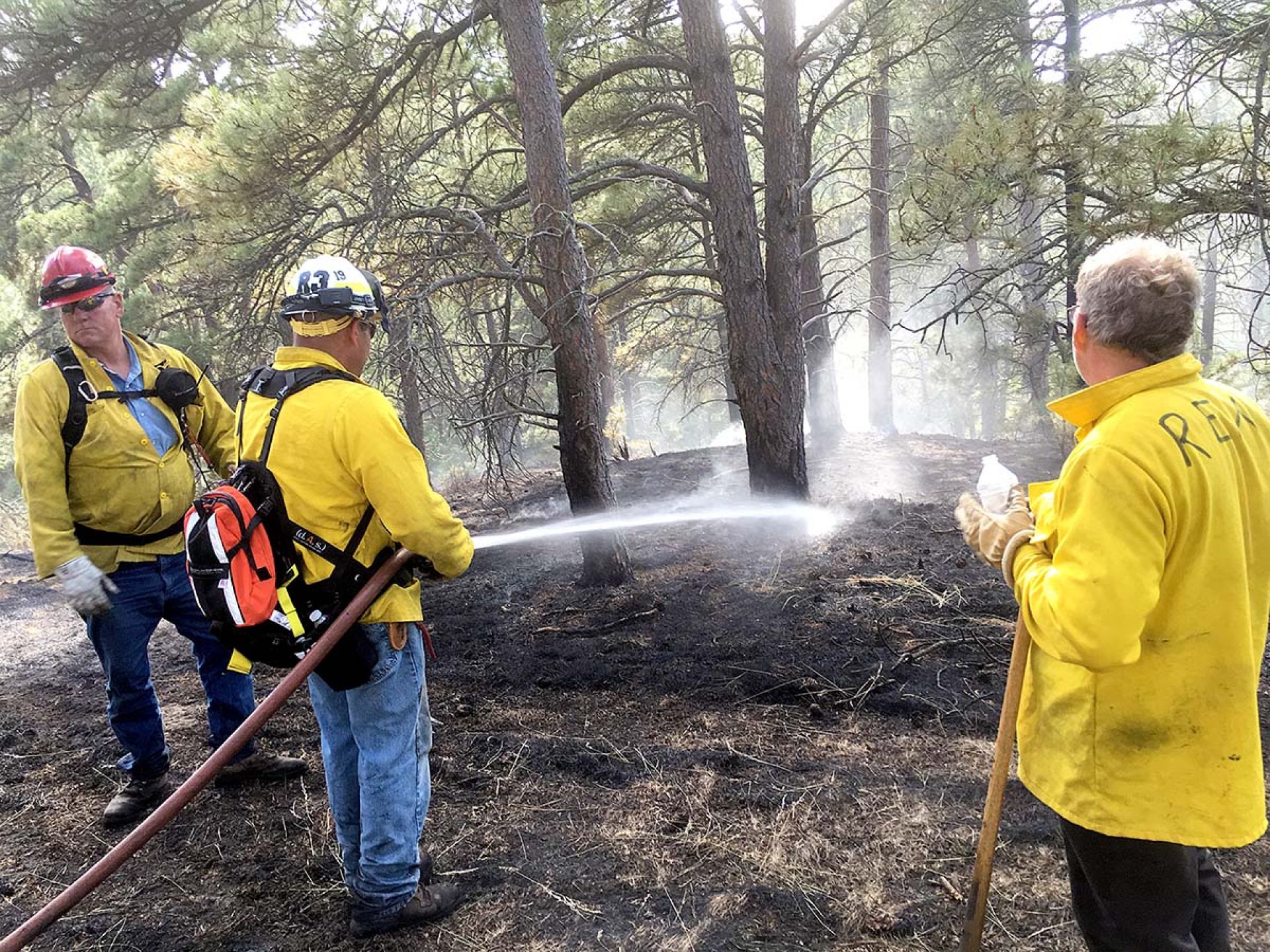 A firefighter sprayed water at the base of a tree while fellow firefighters surveyed the area.

Three fires broke out after lightning strikes on July 4, 5 and 6 north of Rushville, Neb.

On July 5, Fire Management Specialist Seth Peterson, from the Nebraska Forest Service in Chadron, Neb. road in a spotter plane from the Civil Air Patrol with pilot Vern Platt.

“It appeared that a large ponderosa pine was smoking from its base,” said Peterson.

They notified the Rushville Volunteer Fire Department of smoke in the timber once they determined the location. With a north wind, Peterson was concerned about the fire’s potential for going up the hill as the grass caught fire. He identified the fire’s location about 13 miles north of Rushville and about 2 miles to the east of Highway 87.

Peterson maintained communication with the firefighters and guided them to the fire from the air. Once the trucks exited Highway 87, there were no roadways to access the fire. Firefighters drove through fire breaks created from fires of previous years. The fire burned approximately 20 acres.

According to Assistant Fire Chief Jerry Kearns, the crew worked in rough and unforgiving terrain for several hours to contain the fire. There was duff - old pine needles, grass and bark - that accumulated about 10 inches deep. After the lightning struck, the duff smoldered until the rain subsided and became a fire. The firefighters had the fire contained around 5 p.m.

On July 6, another timber fire broke out three miles west of the Extension Church.  Landowners and three outline rural fire trucks helped contain the fire to about 3 acres.

Unfortunately, the fire season is just starting and fires will become more frequent as the temperatures rise. Luckily, the Forest Service Single Engine Air Tank will have the plane that is capable of dropping fire-retardant around July 15. This is the fourth year the state allowed the fire department to use the plane. Chadron housed the plane for three of those years. Peterson said they are guaranteed 60 days with the plane and should they need it longer, they can request it for a few weeks at a time until it is not needed. The plane can be in Valentine, Alliance or Chadron since those areas provide fire-retardant refills.  The plane helps the firefighters contain and control fires easier.

“Early detection can lead to early suppression,” said Peterson. “Catching this initial smoke is the goal of our spotter flights. This will lead to keeping small fires, small.”

A state-wide burn ban remains in effect unless residents receive approval from the fire chief.

With the concerted effort of emergency personnel, civil air patrol, forest department and fire department, they are more likely to spot and contain fires.