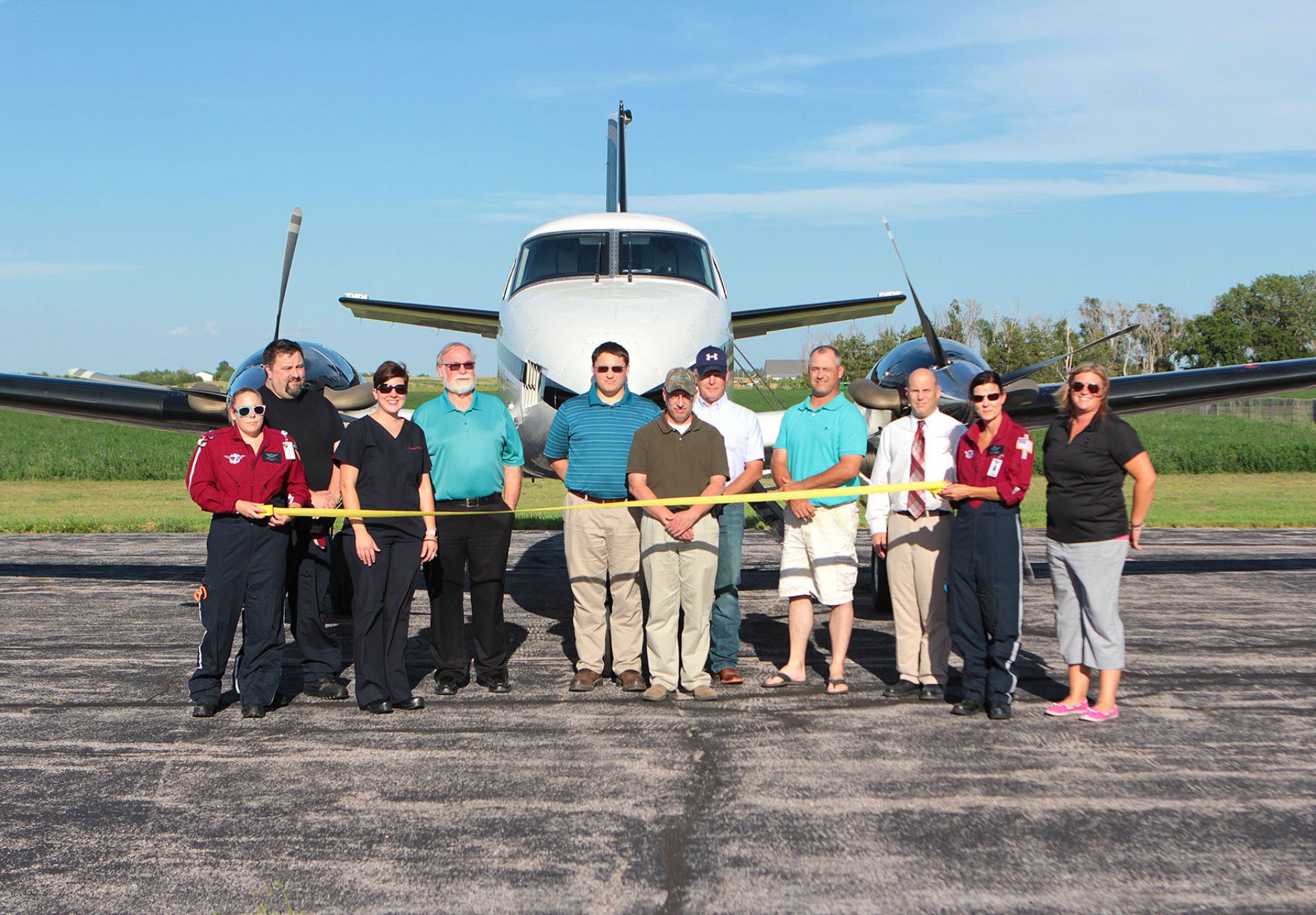 Those involved in bringing about the new AWOS (Automated Weather Observation Station) at the Gordon Municipal Airport celebrated their victory with a ribbon cutting Tuesday, August 9. Those in attendance included members of the Gordon Airport Authority Board, City of Gordon Employees, Gordon Memorial Health Services staff and a flight crew from EagleMed of Scottsbluff, Neb.

Cassie Banks, the initial proponent of the project, had this to say the night of the ribbon cutting, “My heart is full tonight because a project that is very close to my heart has come full circle. The AWOS at Gordon Municipal Airport is fully operational. To me, this means that the people of our community are a little bit safer today because our fixed wing medical aircraft will be able to land in more adverse weather conditions to transfer our critically ill patients.

“Every winter for the past few years I’ve ridden on the ambulance with critical patients in order to rendezvous with medical aircraft in Chadron or Pine Ridge because they were unable to land in Gordon because we did not have an AWOS. This technology keeps our patients and our flight crews safer in less than ideal weather and will decrease the number of times we are turned down for flights due to weather.”

During several runs during the winters of 2013 and 2014, Banks did an informal survey asking the pilots if they would have been able to land in Gordon if they had an AWOS. The answer was always yes. “The extra time it took to take these patients by ground an hour down the road could have cost someone their life (though it didn’t) and I knew it was something we just had to have,” Banks added.

Banks approached Gary Ruse of the Overmass Trust and he agreed that there was a real need. The board chose to give $62,150 to the project. “Our board just wants to contribute every and any way possible to help with medical needs of this community,” said Ruse. “Our entire board felt that this was one of the best projects to get involved in, because it touches all the lives in this community, not just a few. Nobody is exempt from it. Any one of us could need that service at any time.”

Banks also wrote a letter to EagleMed of Scottbluff, the life-flight company serving the area. She told them, “During the last year, we estimate that we were unable to transport between 18-22 critical patients because our airport did not have AWOS equipment ... Each of these occasions involved seriously critical patients.”

Knowing firsthand the perils of landing without an AWOS in inclement weather, EagleMed saw the value in supporting the system, donating $70,000 to the project. The $132,150 is enough for the equipment, the installation, and a few years worth of maintenance.

The system is now fully installed and has been approved by the Federal Aviation Administration (FAA). It is available to pilots now, but will not begin disseminating information to other services like the National Weather Service until September 15.

More in this category: « Drugs, paraphernalia and guns seized during search of Gordon house Sheridan County Pursuit Results in Crash and Fatality »