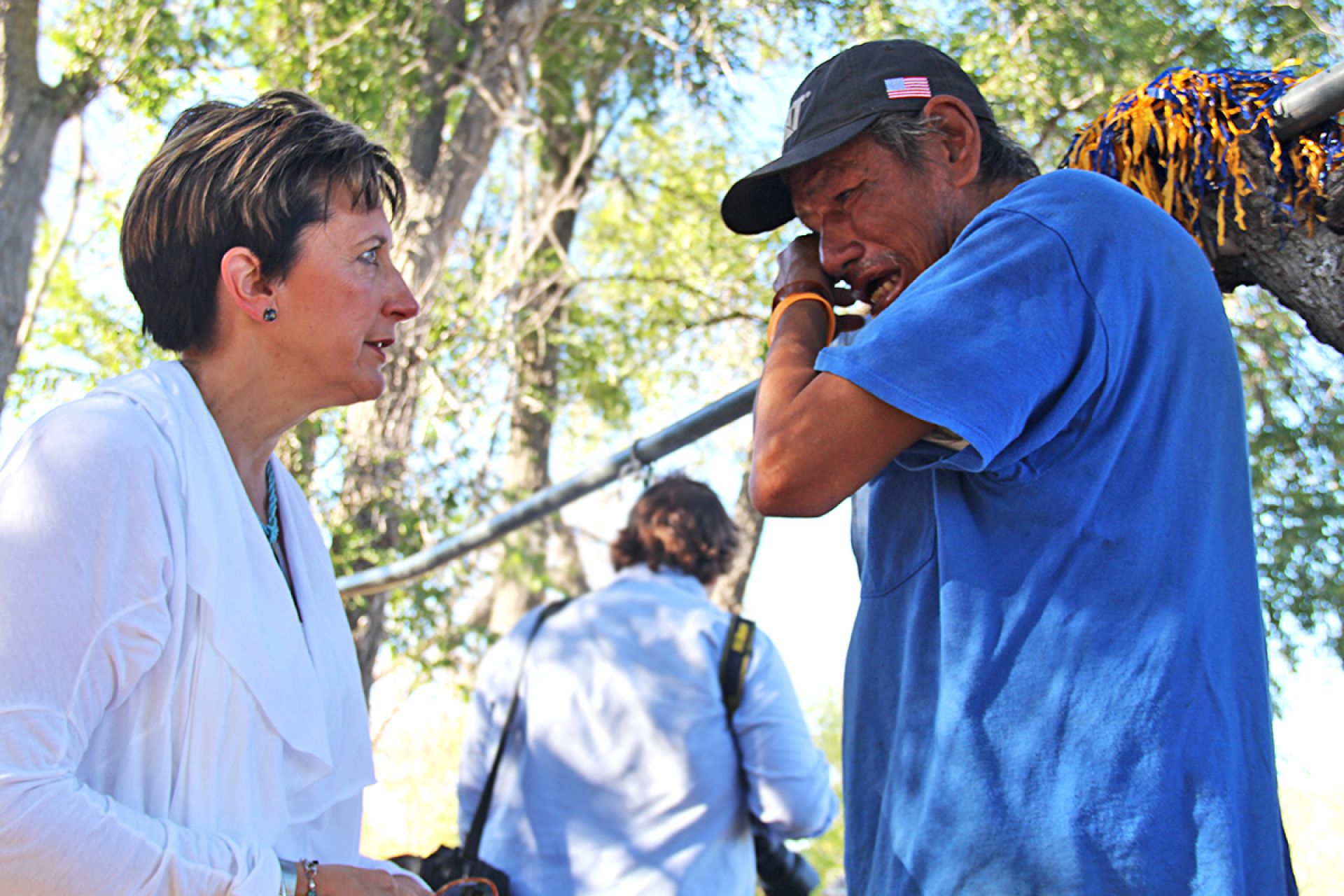 State senators traveled to Whiteclay on Wednesday, Sept. 28 to see the pervasiveness of alcohol and develop solutions.

Before touring the town, Norma Black Smith of the Lakota tribe welcomed senators, senatorial staff, local activists and press to the Lakota land. “I want to give you permission to walk on this land and do what you have to do for the people here in Whiteclay,” said Black Smith.

After eating Indian tacos and wojapi - a peach pudding - Nora Boesem provided a testimony about foster children who suffer from fetal alcohol syndrome. She shared how the mothers with FASD have no concept of time, and some may not remember to eat nor that they had a baby. “It takes programs and support that we don’t have in order to help this not happen,” said Boesem. Her oldest son is 24 years old – with the mental age of a 6-year-old – who requires supervision to make sure he doesn’t end up in prison again. “That makes him a victim, but we don’t look at it that way,” said Boesem. “We look at him like a criminal.”

Lakota Hope owner Bruce BonFleur provided a final thought before everyone went to tour the new area for the GROW2gather program at Lakota Hope, Oglala Nursing Home, and Whiteclay. He said, “Most of you are coming here with the idea that we can come help this poor situation, these poor people. They are not less than you. They are equal to you.” With that shift in mindset, the senators, their staff and the media toured the nursing home.

Once the tour concluded, everyone congregated for a press conference. Nebraska Senator Patty Pansing Brooks addressed the despair of Whiteclay and how the abandoned buildings foster an area for violence. Whiteclay is an unincorporated area within Sheridan County that has “no local governing body, no local ordinances, no public safety personnel, no infrastructure, no police force nor a fire protection system or equipment,” said Pansing Brooks.

To address those missing components, Pansing Brooks worked with senators Brett Lindstrom, Tanya Cook, and Roy Baker to create a multifaceted approach, which involves the establishment of a state patrol substation in Whiteclay, removal of abandoned buildings, creation of a detox and treatment center, economic development, and establishment of wireless broadband.

Pansing Brooks was pleased to see that Viarero Wireless established a mobile wireless tower in Whiteclay. Viaero’s Vice President of Government and Business Jon Becker talked about the importance of wireless in Whiteclay. “We all know that the first way to start rebuilding the community is putting in the proper infrastructure,” said Becker.

As solutions take fruition, Pansing Brooks said the purpose is to HEAL Whiteclay through Health, Education, Access, and Love.

Once the press conference concluded, Abram Neumann accompanied everyone to the streets of Whiteclay. Neumann does street ministry with the goal of building friendships. While on the streets, several Native Americans came to talk with the senators about what they need. One suggestion was a homeless shelter. There were plastic water bottles, mattresses, blankets and clothes scattered across the landscape.

Our final stop in Whiteclay was Camp Justice. The area was the site of an uprising, and the name was given in irony of the events. There, Senator Pansing Brooks reconnected with a man she talked with on a previous visit. The two shed tears over the state of Whiteclay, but Pansing Brooks reassured him his story would influence policy when she returned to Lincoln.

As the trip concluded, the responsibility bestowed by God upon BonFleur that BonFleur bestowed upon us was a call to action. He said, “Part of me is in each one of those people on the street. Your job while you’re here, as long as you’re here, is to...keep that alive.”

That day everyone had a job to help the people of Whiteclay. From the legislature to the reporter, the Native Americans provided insight to solutions for the anguish that has perpetuated across many generations.