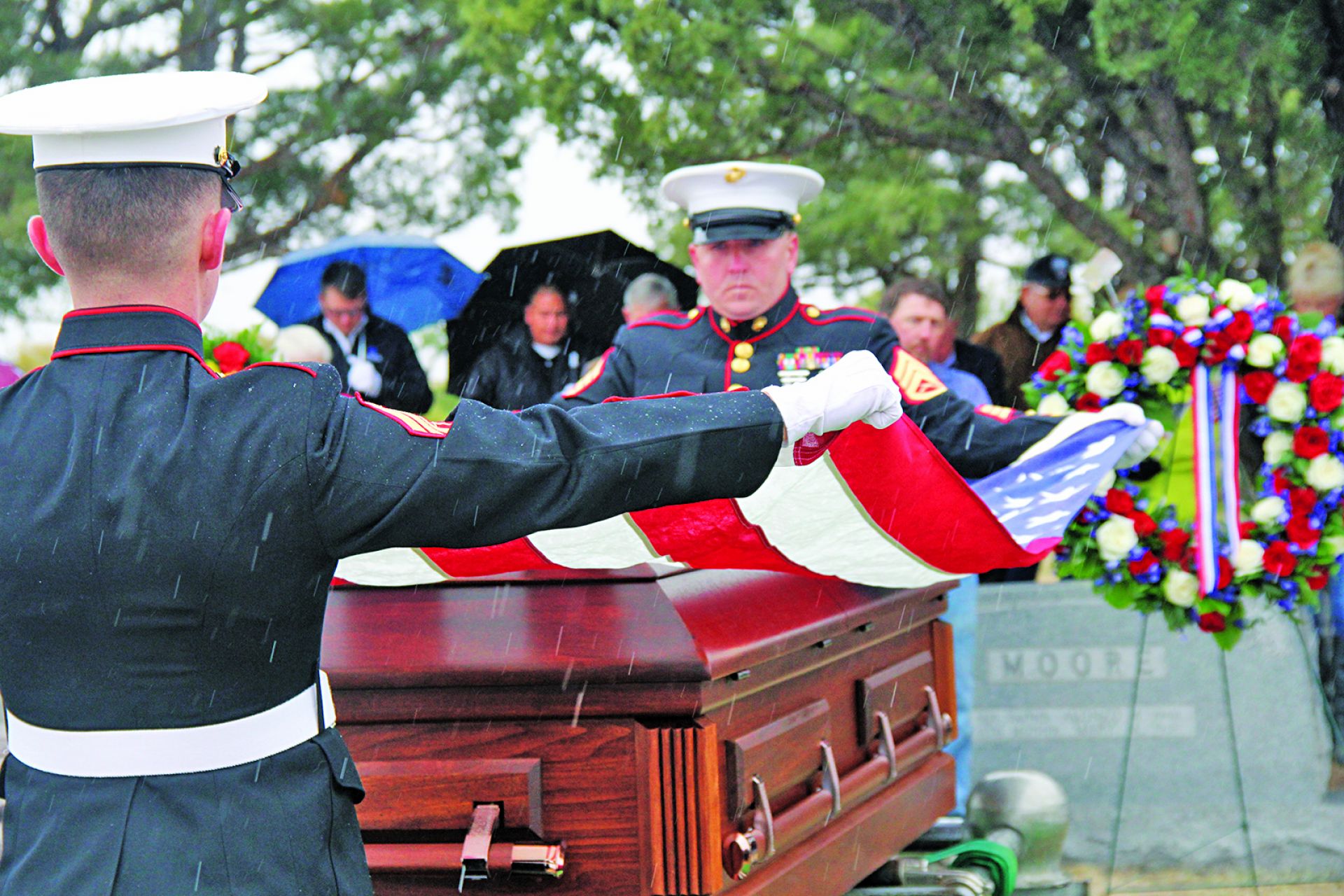 A light snow fell as Sgt. Fae V. Moore was laid to rest beside his parents at Beaver Valley Cemetery on October 6 at 10:30 a.m. after being missing in action for almost 73 years.

The sounds of a 21-gun salute  faded in the air as the bugle call “Taps”  evoked emotion for family and friends in attendance. Moore’s nephew Lawrence Denton spoke of how much it means to have him home. “I am thrilled because I know my grandmother has said he is coming home.”

Moore was escorted by United States Marines to his resting site as American, remembrance, and Missing in Action flags flew. Before Moore arrived at the cemetery, the Marines transferred him from a hearse onto a horse-drawn wagon, which escorted Moore into Beaver Valley.

Over 100 people stood in the inclement weather to witness the return of an American hero. Family members draped red roses over Moore’s casket and some said a prayer.

Administrator of the Nebraska Veterans Cemetery Allen Pannell was present during Moore’s service and spoke on Gov. Pete Ricketts’ behalf. “I want to share with you my utmost admiration and appreciation for Sgt. Moore’s bravery, sense of duty, and service.”

Moore was a proud Nebraskan who spent his youth on the farm on the Pine Ridge Indian Reservation and became a ranch hand for about five years after graduating from high school. Then, on Aug. 18, 1941, he enlisted in the United States Marines in Minneapolis, Minn. for training.  On Dec. 2, 1941, Moore received orders to join Company E, 2nd Battalion, 8th Marine Regiment, 2nd Marine Division.

His marine division fought in the Battle of Guadalcanal during November of 1942. The following March, Moore became Private First Class Moore as his unit was sent to New Zealand to train for the Battle of Tarawa Atoll. He received high marks from his commanding officer and was promoted to Corp. Moore on July 20, 1943, and then a sergeant shortly afterward.

The 2nd Battalion’s next mission was the Tarawa Atoll in the Gilbert Islands. The battle centered on the island of Betio, a 2-mile-long and less than half-mile-wide island. On the morning of Nov. 20, 1943, the 2nd Battalion led the charge. With a low tide, the Marines were stranded by coral reefs. Still, over 5,000 Marines swam through heavy enemy fire to shore. Sgt. Moore never made it.

He was killed in action during the battle of Tarawa in World War II on Nov. 20, 1943, but his sacrifice will continue to be remembered by friends and family for decades.