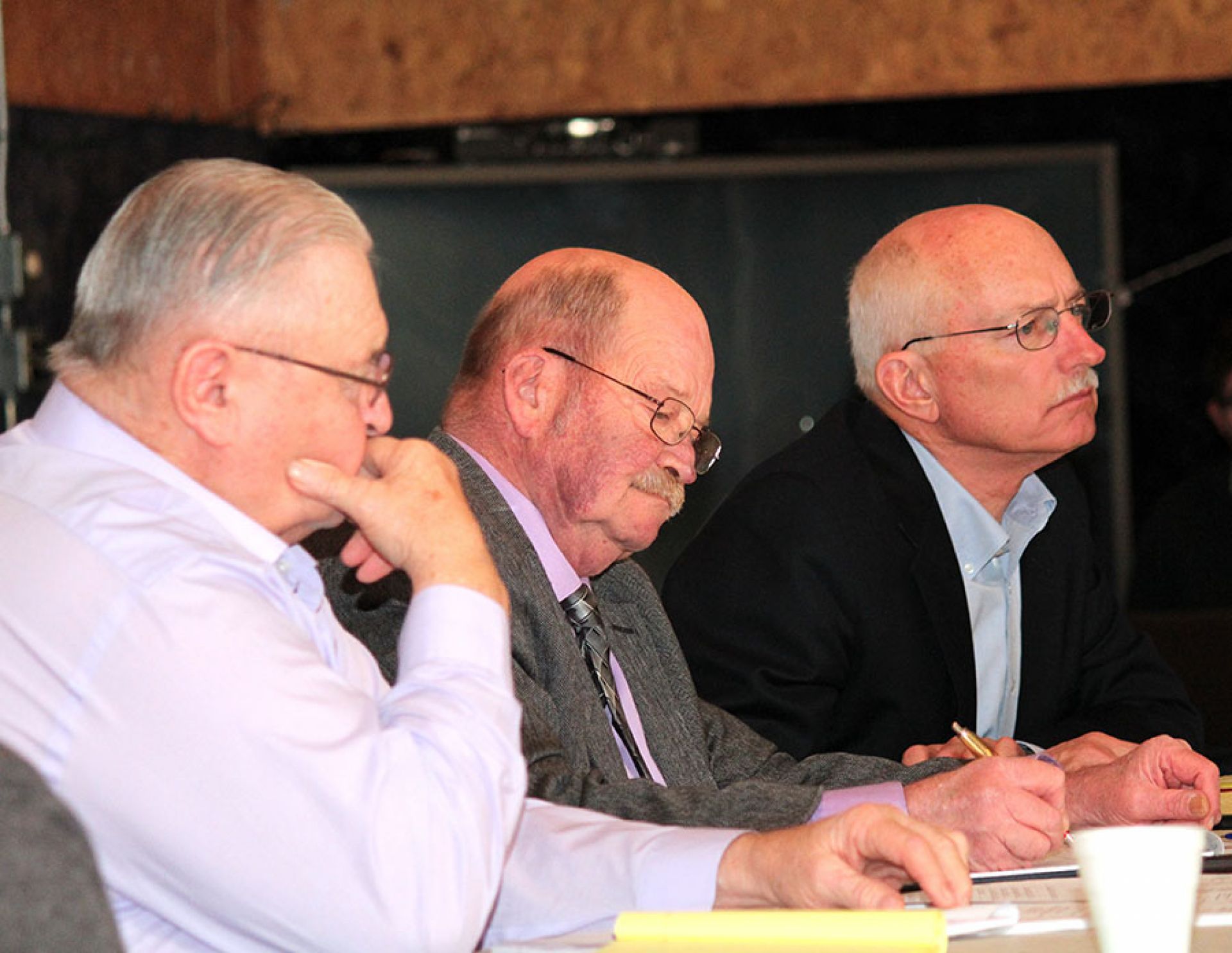 The Sheridan County Commissioners hear public testimony regarding the renewal of the Whiteclay liquor licenses Thursday, Jan. 5 at the Rushville American Legion. Photo by Lauren O'Brien

On Tuesday, January 10, the Sheridan County Commissioners unanimously voted to recommend the renewal of all four liquor licenses to the Nebraska Liquor Control Commission.

Commissioner James Krotz read a statement stating "it is my opinion that the Sheridan County Sheriff's Department does provide adequate law enforcement."

Commissioner Loren Paul also voiced his thoughts about alcoholism before the BOC announced their recommendations. "There's no doubt in anyone's mind sitting here that alcoholism is a problem," said Paul. "The solution does not exist in the supply nor the supply chain. The solution exists within the community that has the ability to assist those with alcoholism."

The commissioners saw no material change since the original issuance of the licenses and no evidence of inadequate law enforcement as reasons to offer a recommendation for denial to the LCC. After approving the recommendations, Krotz read a resolution applicable to each license. The resolution detailed the process from the LCC requiring the business owners to file a long-form application to the public hearings. It also cited how the Nebraska Supreme Court held the licensee is entitled to a renewal if the licensee is qualified to receive the license, the premise for the renewal is the same premise designated with the original license, and the premise is suitable for the sale of alcohol in accordance with the original license. The resolution also stated, "very little evidence has been presented to the Sheridan County Commissioners on whether the licensee applicant meets the requirements of 53-125 or about the premises designated in the initial license."

For those reasons, the commissioners moved to recommend the LCC renew the licenses for D&S, Stateline, Jumping Eagle Inn, and Arrowhead Inn.

Beer. Whiteclay. A poor reflection on the “Good Life”? On Thursday, January 5 the Sheridan County Commissioners held four liquor license hearings at the Rushville American Legion for the public to offer evidence in support or opposition to the re-issuance of liquor licenses in Whiteclay.

Each hearing had a time limit of 50 minutes, which gave members of the public, who signed up to speak, three minutes to give testimony.

“We have tribal laws and we do not allow alcohol. It is a dry reservation,” said Bryan Brewer, president of the Oglala Lakota County Schools school board and former tribal president. “We know what it does to our people. Yet right on the border of the state of Nebraska sells alcohol, which is tearing our people up.”

Themes communicated from both sides of the issue voiced the injustice to the Lakota people, the dangers for travelers on Highway 87, and the legal rights of the business owners to operate their business within the law. Several people’s testimonies involved labeling Whiteclay as a skid row or divider for Nebraska.

D&S Pioneer Service, State Line Liquor, Jumping Eagle Inn, and Arrowhead Inn beer-only liquor stores were discussed with time allotted at the end of each hearing for a representative from each store to speak.

Abram Neumann of Lakota Hope Ministry in Whiteclay offered testimony to the dangers he is subjected to without speedy police response. “Because of the way the police response times are and because of their distance,” said Neumann, “the police would only be there to scrape my body off the pavement.”

Other testifiers voiced concern about the effects on surrounding communities if the beer stores are closed. Should the store owners be denied their licenses, a few testifiers said traffic will increase, especially on Highway 87, while other testifiers disagreed. Some people found that argument invalid and cited how the Sheridan County officials in Rushville became complacent with the problem since it is 20 mi. away.

Although alcohol sales in Whiteclay was the main subject of the hearings, David Russell of Hay Springs pointed out that alcoholism is a disease. “Let’s treat the disease, not pretend that moving the source of alcohol will change anything.”

Gladys Petersen of Gordon relayed a similar statement to the commissioners about her experiences working at the detox and substance abuse center in Gordon. “Until we actually address that problem [alcoholism] everything that you do – whether you issue a license or whether you don’t issue a license – is going to make absolutely no difference,” said Petersen.

Beyond the alcoholism occurring in Whiteclay and the Pine Ridge reservation, murders and prostitution also happen. Kim Greager of Rapid City, S.D. told the commissioners how people sell their bodies for five dollars to buy four cans of high octane beer. “If it was happening to white people, would you guys let this happen for so many decades?” asked Greager.

Toward the end of the final hearing, Frank LaMere, a Native American activist, asked the county commissioners to be courageous and deny the licenses. “You have to always stand with the truth,” said LaMere. “This will be the most courageous decision you make, if you choose to make it.”

Commissioner James Krotz thanked everyone for their civility and providing them with information to help make a decision.

The county commissioners will meet Tuesday, January 10 to decide how to move forward after the hearings. They have four options: denial, no recommendation with conditions, no recommendation, or approval. Now the Liquor Control Commission will review the local recommendations for the four licenses with a final decision probably in February or March.