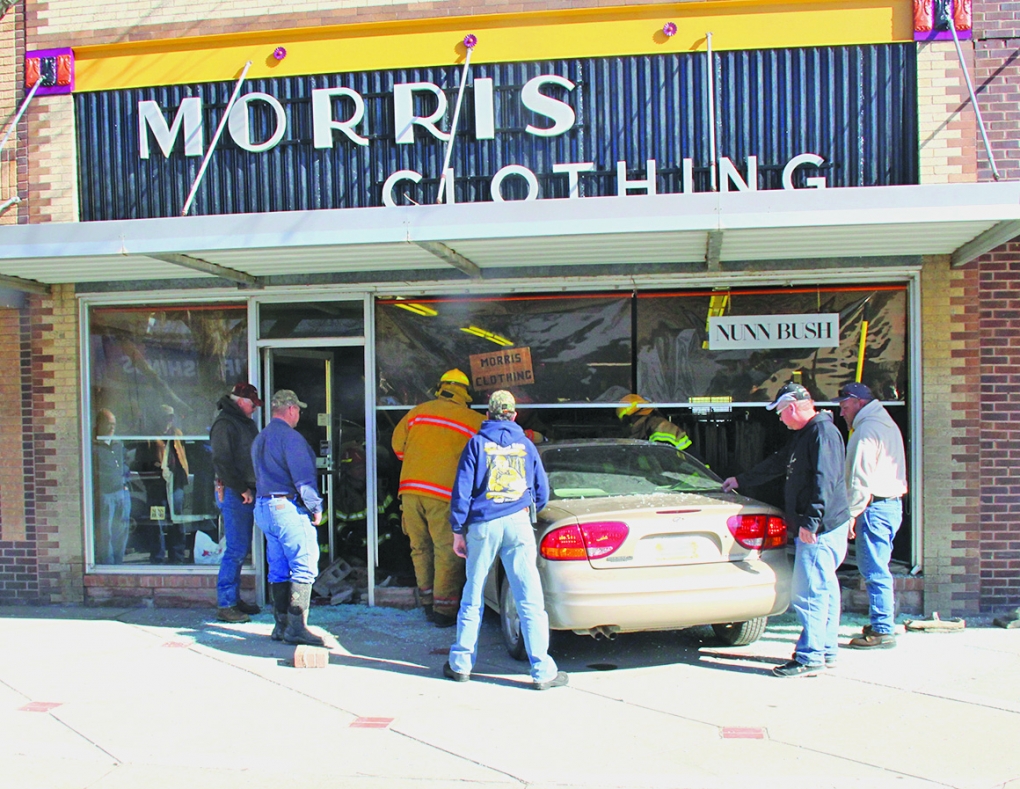 A gentleman pulled into a parking spot in front of Morris before hopping the curb and crashing into the store window. The noise from the accident shook the walls of the surrounding businesses and caused several people to exit their businesses to see the scene. Gordon police officer Lt. Clay Heath said the accident was caused by operator error. The gold Alero stopped halfway through the front window as glass and clothing racks scattered about 15 ft. deep through the front of the store. The driver was the only person in the vehicle and was taken to the hospital despite no apparent injuries.

Owner Tom Morris was at lunch at the time of the accident. He was at the pharmacy when a person came up to him and asked if he was Mr. Morris. They said someone was in the front end of his store. Morris thought someone was waiting for him at the door. As he exited the pharmacy, he looked at his store and realized what the person meant. Despite the situation he said, “everything will be alright. Nothing you can’t fix.”

Firefighters and Lt. Heath arrived shortly at the scene to assess the situation. The vehicle drove through the lower brick work on the building, but left minimal damage to the vehicle. The fire department blocked the Alero with pieces of brick as they removed debris from underneath. The car was pushed out of the building into a parking spot.

They searched the debris in the shop as Morris exclaimed, “save the Cubs” after they found a Chicago Cubs baseball flag. Morris looked on as there was not much he could do about the situation.

Firefighters moved the clothing racks and shelves out of the way as they dumped the broken glass into trash bins. Window measurements occurred as the firefighters wrapped up their clean up and Morris voiced his appreciation for everyone’s help. “That’s why we’ve got you guys,” he said. “You’re wonderful.”

The accident was unfortunate, but Morris was glad no one was hurt, as the property damage is fixable.