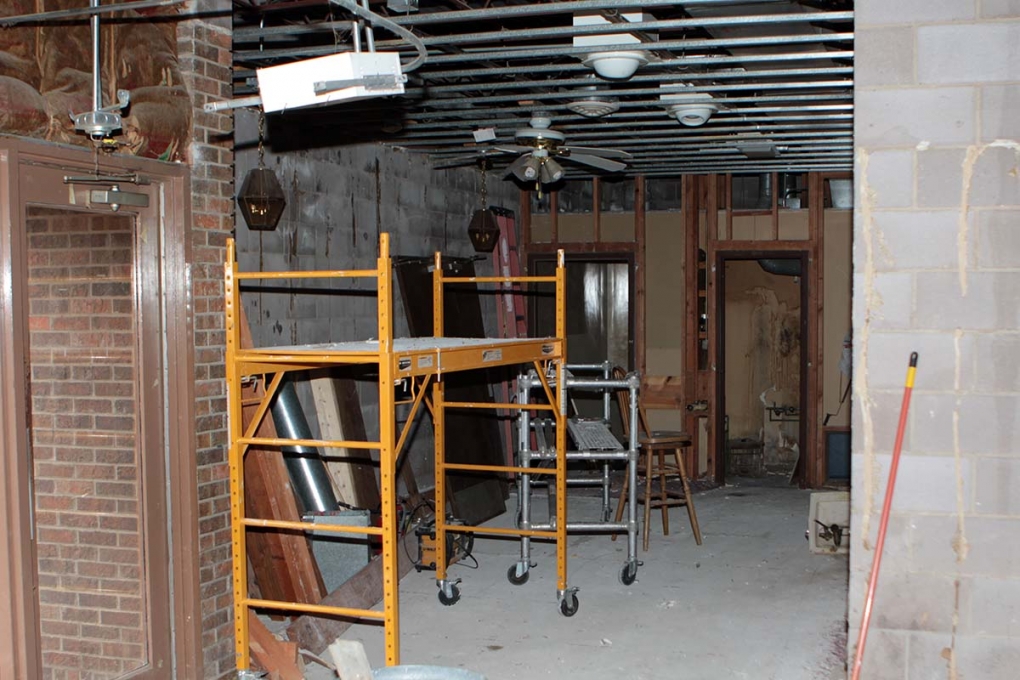 The Gordon Theater has raised enough funds to match the Peter Kiewit grant, but the work is just beginning.

On January 2 that deficit was met through a $21,000 Greater Good Grant from Panhandle Partnership. “It’s a huge milestone, but there’s still a lot that lies ahead of us,” said Jordan Huether, Gordon Community Theater, Inc. President.

Now the physical work begins. February 8, 20, and 21, were volunteer demolition days where community volunteers helped prepare the theater for construction. Most of the demolition work was needed in the smaller theater. During the renovation the theater will get a new digital projector, surround sound, carpet, drywall, seats and concession area.

Secretary Valerie Mann,  of the GCTI, has helped obtain grants and engaged with the community during fundraisers for the theater from the beginning. “The support from the community and from volunteers has been especially gratifying in the last months,” she said.

The theater board approached the Gordon Chamber of Commerce to ask for help selling theater seats. Mike Shald volunteered for the chamber, selling 150 seats at $150 each. While the theater met their initial fundraising goal, additional funds raised will determine the quality of the seats and other amenities. To purchase seats, contact Jordan at the Sheridan County Journal Star at 282-0118 or Mike at 282-0876.

The priorities for the theater are updating all the systems to code like the electrical and HVAC systems, installing  sprinkler, heating and fire suppression systems and making the building ADA compliant. Even after the demolition, the theater board asks that the public help with installing drywall and painting.

The building will have one theater with a high-definition digital projector. It will draw money into the community and “give everyone something to take pride in in the community again and just be proud of living here,” said Huether.

Beyond movies, the Gordon Theater will have a stage available for programs and concerts. Thus, the theater will become a community space for Gordon and the surrounding communities to enjoy.

The theater previously closed in December 2010 and fell into disrepair. Mold grew as a ceiling leak spread until the Gordon Community Development Corp. took ownership.

Gordon has had a theater in the community since the 1930’s, but misfortune closed it down. The Pace Theater had mat-faced tile for the side walls and a high grade pressed brick on the building. It was 60 by 100 ft. in size. The first showing was “The Melody Man.” “The theater was a hub for your entertainment,” said Shald. “Everybody went to those shows back then.”

The Pace Theater burned down in the late 1960’s after something smoldered overnight. The next day, some gentlemen sat at the cafe on the corner of N. Main St. and E. 4th St. and saw smoke coming out of the theater doors. A fireman at the cafe ran down and jerked open the locked doors. As the air circled through the theater, smoke and movie tickets danced through the air across Highway 27.

To replace the theater, eight community members formed the Greater Gordon Corporation and a Board of Directors led by John Borman. The board began a fundraiser by selling shares for $10 each, with a five share minimum. The Gordon Chamber of Commerce purchased 300 shares, the most of any shareholder. The theater was reopened March 1, 1972, with “They Call Me Trinity” as the first show. The ticket prices were $1.50 for adults, $1 for high school students, and $0.50 for grade schoolers.

Mann reflected on the theater project from obtaining grants and becoming a 501(c)3 to bringing in new leadership. “The best decision I made in regards to the theater was turning leadership over to Jordan Huether.” He brought new ideas and technical skills to the board.

A theater is more than just another business in town. It brings about community engagement and investment. Currently people travel to other communities to watch a movie. As GCTI continues to raise funds and rebuild the theater, it is an opportunity for everyone to work together to make their community better.

To donate time, money or both you can visit gordontheater.com, select the Gordon Theater on Amazonsmile, check out the theater’s Facebook page, or contact Jordan at the Sheridan County Journal Star.