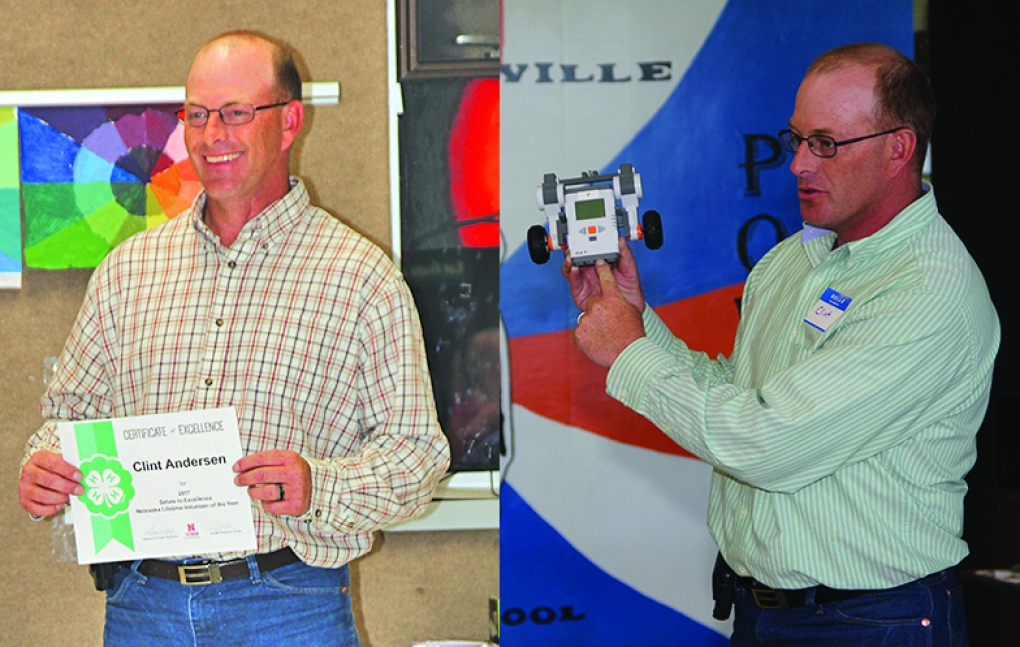 Photo by Lauren Brant Clint Andersen receives a Salute to Service certificate of excellence as the 2017 Nebraska Lifetime Volunteer of the Year during a 4-H program.

Clint Andersen has been a 4-H volunteer between 50 to 100 hours a year for over 27 years. During the 4-H Achievement night last fall, Andersen was announced as the 2017 Nebraska Lifetime Volunteer of the Year. “Words can’t describe how honored I am to be selected for this award,” said Andersen. “Thousands of people volunteer their time to make 4-H such an outstanding organization, so to be honored in this way is truly amazing to me.”

4-H Extension Assistant Melissa Mracek nominated Andersen for the state award. “I selected Clint because he...took over until I could get hired to make sure the Sheridan County 4-H program stayed up and running,” said Mracek. Andersen has dedicated so much time to 4-H that it has become part of who he is as a person. He enjoys sharing his knowledge and experiences with the younger members.

After receiving the recognition, Cathy Johnson from the state’s 4-H office told him that the regional award includes a $200 donation to the organization of Andersen’s choice. “I have selected the new Sheridan County 4-H Foundation as the recipient,” said Andersen.

As Andersen gives back to his community, Mracek said it is good for the youth. “He has continued to give back to the Sheridan County 4-H program so I think it helps youth to see that they can make a difference in their community.”

The values established through participation in 4-H have a lifelong impact. “Public speaking, parliamentary procedure, organization, goal-setting, and record-keeping are skills that 4-H helped me to develop,” said Andersen.

Andersen moves on to compete at the national level. According to the National 4-H council, national honorees are announced the week of April 10. The honorees will be publicly recognized on April 14 during the 2017 4-H Heritage Luncheon in Chevy Chase, Md. They will receive a symbol to represent their achieve and $1,000 to give to a local 4-H program.

Andersen said he experienced successes and failures while in 4-H that taught him competition is a good thing. “My heifer won the first show that I took her to as a first year 4-Her,” said Andersen. “Two weeks later, she got a white ribbon and was last in her class.” It taught Andersen valuable lessons that translate into everyday life, which is why he volunteers his time as a 4-H volunteer. Lessons are always learned and sharing his experiences with the youth is one way Andersen gives back to his community.