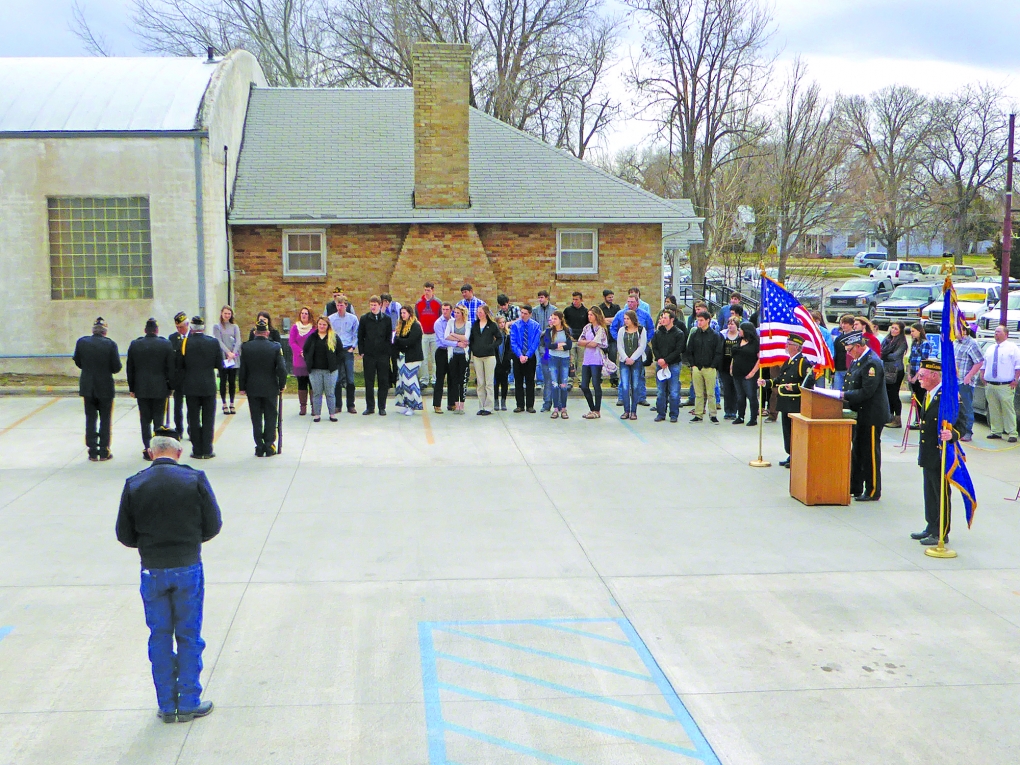 Gordon-Rushville and Hay Springs high schoolers visit with several county officials and learn about what each office does on Monday, March 20 for County Government Day. Dean Huckfeldt of Hay Springs was the Legion guest speaker who talked about making decisions that you can live with for the rest of your life. The Sheridan County Legion Auxiliary ladies prepared Indian Tacos for lunch. Photo by Kristi Paul

The Sheridan County Commissioners held a regular meeting on Monday, March 20 with all members present.

The BOC moved to accept the agenda and approved the March 13 minutes. They signed claim checks most of the morning.

The commissioners, along with members of other county offices, met with Gordon-Rushville and Hay Springs High School students to celebrate annual County Government Day, which is sponsored by the Sheridan County American Legion. The students learned about the duties of the offices before an end of the day activity.

The BOC granted Chairman Jack Andersen’s signature on section 125 regarding employee benefits. It is through First Concord Benefits and has a cash in lieu option that they discussed at a previous meeting.

Road Superintendent Tom Kuester was present to request five surplus items be labeled as such and placed for sale during Otte’s auction services spring auction. The items included a 7,000 gallon fuel tank, 500 gallon fuel tank, two flatbed trailers, and a 1990 Ford pick-up. Kuester also informed the BOC about a maintenance project on 400 Trail. It is a cost-share project with the county, with the county’s portion not to exceed $10,000. The BOC granted Kuester to move forward. Kuester mentioned that April 1 is when the road employees will start their summer schedules, which is four 10-hour days per week.

Kirk Beguin was present to discuss the County Fair Budget for 2017-18. County Agriculture Society members Scott Lindsey, Courtney Ostrander, Alan August, and David Russell were also present. They shared a need for new arena maintenance equipment, fencing and a roof on the stage. The BOC did not promise an increase but encouraged the County Fair Budget for next year to reflect those needs.

County Attorney Jamian Simmons and Deputy Assessor Tina Skinner talked with the BOC about the future plans of the assessor’s office and the Department of Revenue Issue. They reviewed a letter from the Department of Revenue that stated the county was not in compliance with assessment practice, had incomplete property records, valuation overrides, and incorrect property descriptions. Skinner shared that the basic issue was they don’t know why the valuation base is wrong. She informed the BOC they now have pictures to accompany every improvement so the property records are corrected. After some discussion, Simmons encouraged the BOC to call County Assessor Amanda Lane to include her in the conversation. Lane explained that the state says the county has the wrong values because they don’t correspond within the designated range. The Assessor’s office has worked with the state and is considering a contract with Suzie Lore to train the office staff. Lane indicated her support of having Lore in the office.

The BOC discussed with Simmons the authority in the Assessor’s Office in Lane’s absence as she recently moved to Texas. Simmons said Lane is an elected official and is still in charge. She said that neither Skinner nor the commissioners can make decisions for the office. The only way is if Lane delegates authority to Skinner, which Lane said she would submit in writing. Commissioner Loren Paul asked Lane if she intended to return to which she eventually said no. Lane voiced her intention to resign from office, but did not indicate a date. The BOC asked Simmons to provide information about how they are to proceed if the assessor resigns.

The next regular meeting of the County Commissioners is Monday,  March 27 at 9 a.m.