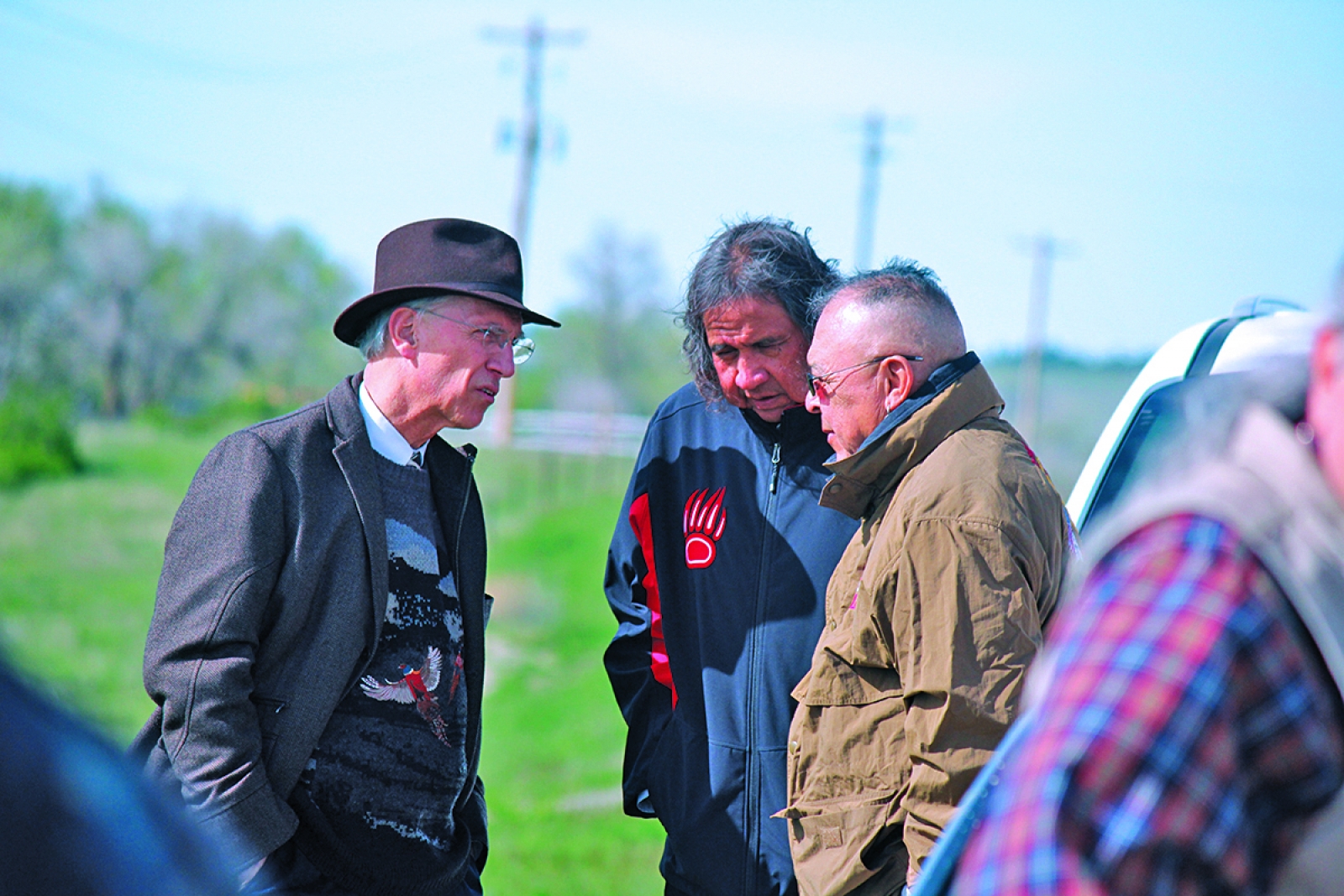 Photo by Lauren Brant – Attorney David Domina speaks with activists Frank LaMere and Sonny Skyhawk before the rally on Sunday.

As last week left the beer stores’ attorney Andrew Snyder out of options to counter the Attorney General’s appeal, the four beer stores in Whiteclay closed their doors. With the Arbor Day holiday on Friday, the lawyers battled on Thursday with both sides making headway over the other. At one point, Lancaster County Judge Andrew Jacobsen renewed the liquor licenses after calling the Liquor Commission’s decision “void on it’s face.” By the end of Thursday, the situation reversed in favor of the people fighting to close the stores.

The four beer stores’ liquor licenses expired on April 30, but they closed a day early to prove a point that people would travel elsewhere to buy beer. Businesses in Rushville reported an increase in sales after the Whiteclay businesses closed, but the long-term impact has yet to be seen. Marsha BonFleur shared that people who live on the streets of Whiteclay don’t have cars and even if they get a ride, Rushville has a police presence. “It’s just not going to be tolerated there,” she said. “The bootleggers who do have the vehicles will just be making more trips, but they’ve always done that.”

Activists gathered at the Nebraska and South Dakota border on Sunday, April 30 to commemorate the last day of business for the four Whiteclay beer stores. Shortly after 4 p.m., the group began walking into Whiteclay before stopping at Arrowhead Inn. Former Oglala Sioux Tribal President Bryan Brewer walked up to the door and placed his cane against it while flashing a smile. “It is a very historic day for the Oglala Lakota and I believe the state of Nebraska,” said Brewer. The walk was not for celebration, but for remembering relatives and people who lost their lives in Whiteclay.

Sonny Skyhawk, Founder and CEO of American Indians in Film and Television spoke about giving the people who lost their lives in Whiteclay a voice.

Attorney David Domina also spoke during the rally to offer his apology to the Lakota about the European people’s introduction of alcohol.

Winnebago Activist Frank LaMere spoke about how the Lakota people have asked for the problems in Whiteclay to go away for 113 years. He said the problems in the village fell on deaf ears, until recently. “It’s going to take a whole generation to assess the damage we have inflicted on the Lakota people,” LaMere said. “And it’s going to take a whole lifetime for us to change anything.” LaMere urged the Lakota relatives to come take the people in Whiteclay home. Lakotas cheered as LaMere stated, “We let the Oglala’s win one.”

As the sun crested the horizon Monday morning, a Budweiser semi turned north off of Highway 20 at 7:35 a.m., headed for Whiteclay. Around 8 a.m., the truck arrived to take inventory out of the stores.

Attorney Andrew Snyder filed a motion later that day for the Nebraska Liquor Control Commission to dismiss the 22 allegations on liquor license violations against the four stores, which include bootlegging and selling alcohol after hours. He argued that the case was moot and the commission has no jurisdiction since the stores’ licenses expired. Snyder is also considering a civil rights lawsuit against Gov. Pete Ricketts, stating he was involved in the process to close the stores.

With the legal battle escalating in the courts, residents of Whiteclay are moving forward to redevelop the community.

Whiteclay resident Abram Neumann shared his excitement for the transformation about to take place as the village becomes a symbol of hope and courage. “For me I celebrate the changes that are coming,” said Neumann.

Tom Cat, a Native American who resides in Whiteclay, said he would like to see more restaurants, a movie theater, and bowling alley come into the community.

Bruce and Marsha BonFleur were called to Whiteclay 15 years ago to help the village realize its potential. On Friday, May 19 Nebraska and South Dakota officials, tribal leaders, Lakota entrepreneurs, business owners and members from economic developing funding sources will gather at the Lakota Hope center to discuss economic development planning for Whiteclay. “The bottom line is for Whiteclay to realize its full potential, there needs to be economic redevelopment,” said Bruce BonFleur.

“It’s time to start healing and beginning to see the value in each other,” said Marsha BonFleur. The future of Whiteclay remains on the drawing board as the ideas for youth centers and art galleries take shape to reframe the image of Whiteclay.