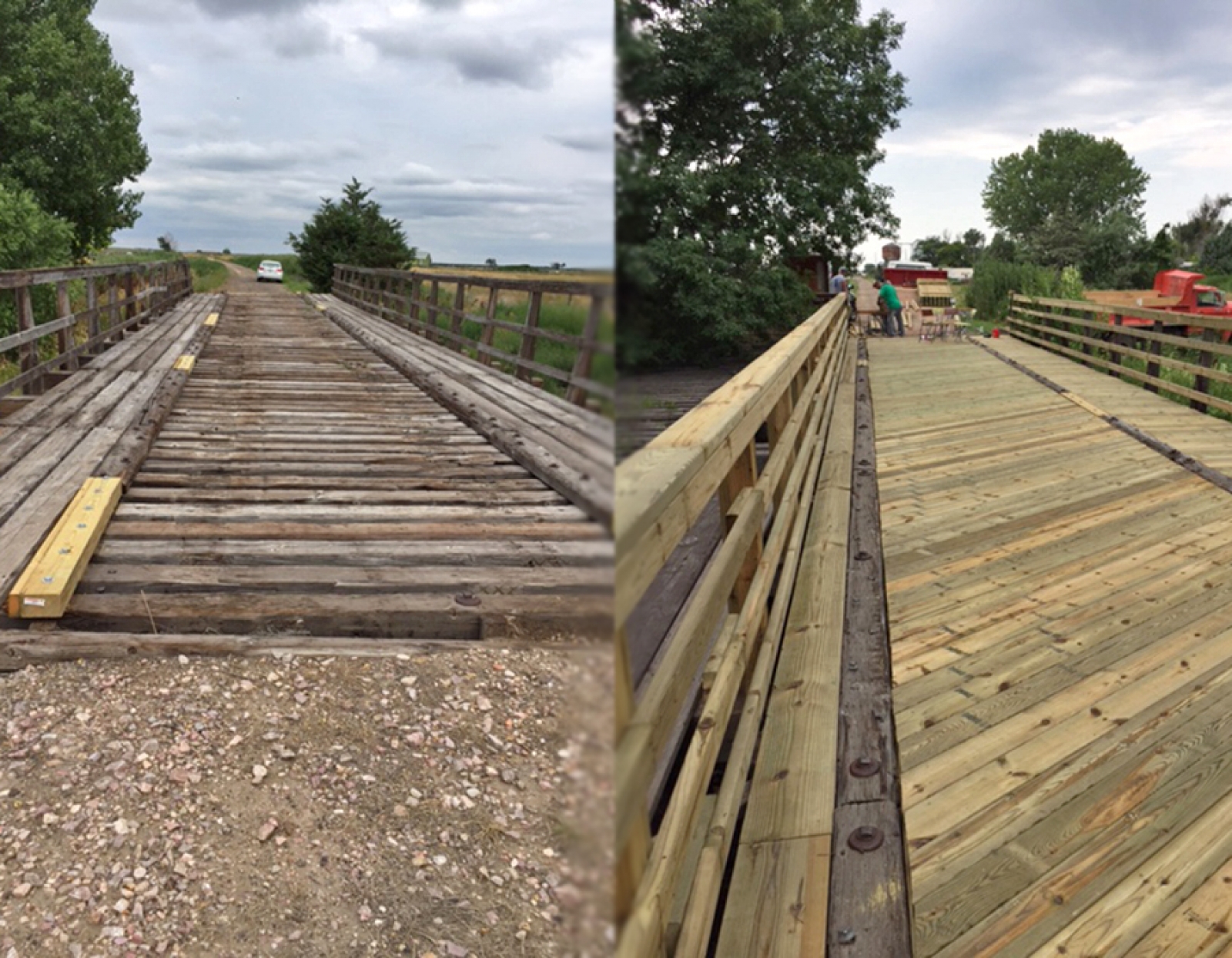 Members of the community came out on Saturday, August 5 and Sunday, August 6 to build two bridges along Sheridan County’s section of the Cowboy Trail.

Before any work began on the bridges, Cowboy Trail West, Inc. collaborated with the Nebraska Game & Parks commission with the goal to finish the trail in Sheridan County. “We told them we could get them a grant if they could raise a 20 percent match,” said Kirk Nelson, Nebraska Game and Parks trail administrator.

Once Cowboy Trail West, Inc. raised the match, the Game & Parks contributed the other 80 percent with a Recreational Trails Program grant through the Federal Highway Administration. As part of the grant, Cowboy Trail West, Inc. received a $10,000 grant from the Nebraska Trails Foundation, $7,500 from Sheridan County Tourism, and the remaining $2,500 came from fundraisers.

This year, Cowboy Trail West, Inc. received a $5,000 grant from the Rails to Trails Conservancy, $10,000 from the Nebraska Trails Foundation, and $5,500 from Sheridan County Tourism. Five-hundred dollars of the $5,500 went toward this year’s bridge building expenses.

President of the Cowboy Trail West, Inc. Ross Elwood continues to maintain the trail.  He mows and sprays the trail from Hay Springs to Gordon as a volunteer a few times a year to keep it looking nice. So far, Elwood has mowed the trail twice and will likely mow and spray it one more time before winter with all the precipitation Sheridan County has received.

Nebraska Game and Parks purchased lumber for the bridges and 6.8 mi. of new surfacing that is crushed limestone. They also contracted the work. Cowboy Trail West, Inc. founding member and treasurer Kris Ferguson is hopeful the limestone portion of the project will start on September 1. “We had to get the bridges done before they could put the limestone down because they bring the limestone up to the bridges,” she said.

Ferguson’s passion for creating a Cowboy Trail section occurred after she was struck by a vehicle while riding her bicycle south of Gordon on June 11, 2011. Ferguson has since worked with many dedicated community members to establish a trail in Sheridan County for bikers, walkers, and runners. The 321 mi. Cowboy Recreation and Nature Trail meanders 321 mi. from Chadron to Norfolk, which is the longest rails-to-trails conversion in the nation.

Through railbanking, the trail was placed under federal oversight as part of the National Trails System Act. Congress amended the act in the early 1980’s to establish a preservation program for corridors that would be abandoned. According to the Rails to Trails website, thousands of miles of rail corridors were preserved.  Gordon is one of the major cities along the Cowboy Trail, along with Valentine, Ainsworth, O’Neill, and Neligh. In 1994, the state legislature wanted the Game & Parks commission to develop the railroad into a trail. “It’s outdoor recreation, that’s what Game & Parks stands for,” said Nelson. “It’s enjoyment of our state’s natural resources.”

Prior to 2011, the only completed portion of the trail totaled 195 mi. from Valentine to Norfolk. “We have 3 mi. in the west and soon we will have 6.8 mi.,” Ferguson said with a smile.

With the help from Nebraska Game & Parks, locals, and trail enthusiasts, they have focused their efforts on completing the trail from Rushville to Gordon. Part of that effort included building two bridges in Gordon.

The first day, around twenty-two people came out with their screw drivers, saws and hammers, and worked from 8 a.m. to 5 p.m. Ferguson said they anticipated the bridges taking one weekend each to complete.  With the help of volunteers, one bridge was finished and work started on the second bridge on Saturday.

On Sunday, fifteen people came out to finish laying the second bridge. By 11 a.m. on Sunday, volunteers had laid 169 ft. of new surface and completed the project.

With the help of Nebraska Game and Parks, the community and trail enthusiasts, Ferguson said they will partner with other groups to complete the trail west of Rushville over the next few years. While progress continues, they still need local support. “Our agreement with Game & Parks is to do the routine maintenance on the trail, and that’s all volunteer,” said Ferguson.