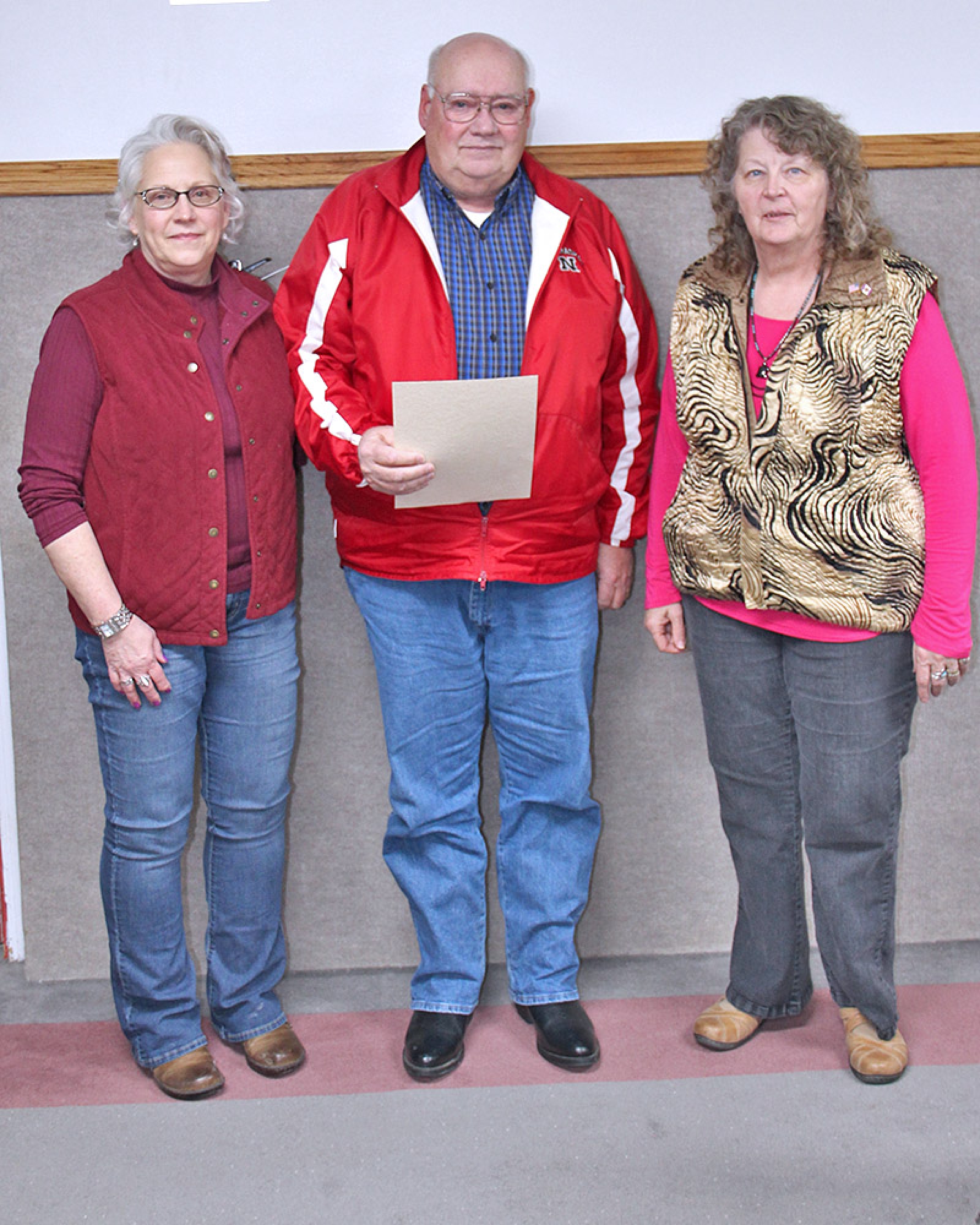 Prior to opening the city council meeting, Mayor Nancy Russell presented City Manager Jacob Sheridan with a toy tractor for his time with the city. The tractor symbolized how Sheridan was going places and was also because the council knew his wife was about to have a baby boy. It was Sheridan’s last meeting as the city transitions with Chad Edwards serving as the next city manager.

There was no treasurer’s report to review for January.

As the council reviewed the bills, Sheridan noted the bills for four background checks, three for the city manager finalists and one for an ambulance personnel. The council moved to pay the unpaid bills.

At 6:02 p.m. hearing officer Sheridan opened a public hearing for the 2018 one-and six-year street plans. With no public comment, the hearing was closed. The plan before the council focused on maintenance in the coming year with the six-year plan looking at the development around 10th St. The council adopted Resolution 2018-02 to accept the one-and six-year street plans as presented.

Mike Winter was asked to attend the Gordon City Council meeting as it would be Sheridan’s last meeting. However, the reason for his attendance was to honor him for his nearly 44 years of service to the city. Mayor Russell introduced Ordinance 1172 for the renaming of Rodeo Dr. to Winter Dr. The council moved to approve the ordinance with their appreciation as Winter enters retirement.

Darrell Crown from Blackhills Life Flight in Rapid City, S.D., presented information about life flight insurance. Air Methods Advantage provides helicopter and airplane transportation during emergencies. The closest location to Gordon is in North Platte. They offer individual, family and group plans. After the bill is sent to insurance, Crown said they cover the remaining balance minus a person’s insurance deductible. The city currently provides Omni Advantage to 55 employees, but the plan is expiring and is no longer available. The council discussed drafting contract negotiations and reviewing it at the March meeting to keep the coverage.

The council reviewed the city’s comprehensive plan. The plan contains updated information about demographics and population trends. The study showed the short-term trend in the population increased but the overall trend was down. It also indicated the people who migrate into and out of the city for work is about even. An energy section was also added, which showed the city’s energy use within the infrastructure and highlights areas to boost efficiency. There was also a community meeting where recreation, housing, economic development and support facilities were noted as priorities. Sheridan opened the public hearing on the plan at 6:43 p.m. With no comments, the council moved to pass Resolution 2018-05 for the comprehensive plan.

At 6:46 p.m. a public hearing opened for the proposed rezoning of the property to the west of the Hacienda on Historic Highway 20 from C-2 high business to C-4 heavy commercial. The planning commission recommended the city council approve rezoning the land. The hearing was closed with no public comment. The council moved to adopt Ordinance 1173. Second and third hearings were waived.

Casey Peterson & Associates accountant Zack Van Sambeek and auditor Kelly Foreman presented the city’s 2016-17 fiscal year audit via video conference. There were no audit findings. There were two adjustments to the audit, which they said was good to have so few. The city’s net position rose by 0.33 over the prior year and the water and sewer rates are paying for the cost of the services. The council accepted the audit as presented.

Sheridan informed the council that the city uses a tractor from Modern Farm for snow removal and snow blowing. The tractor was recently sold, so he said it is in the city’s best interest to purchase a tractor from Modern Farm. The tractor, which costs $45,000, comes with a loader and gravel fork and can also mow properties. To purchase it, the city would look at financing options. With the tractor’s multiple uses, the council approved Resolution 2018-04 to purchase the tractor.

A GenPro electrician visited the well field site for the solar project to see if the location will work. There was concern about the solar panels turning on the generator and driving up energy and gas costs. Sheridan explained the solar panels are connected to the meter and then to the generator so the panels will not kick on the generator. Another concern was having enough space for maintenance equipment to fit between the panels and well, as well as the panels’ energy efficiency decline. The council decided to seek more information and took no action.

Northwest Community Action Partnership has a transportation agreement with the city to provide $1 rides to residents. The council moved to sign the agreement and continue offering this service.

Sheridan informed the council of a change to the city manager employee agreement for Chad Edwards that included a moving expense reimbursement up to $2,500. If Edwards was to leave within a year, then he would pay the amount back and if he left in two years, then he would pay half of it back. Edwards plans to start on March 5. All were in favor to approve the employment agreement.

Sheridan presented the manager’s report. Casey Walton contacted the city concerning the city’s disparity in business between Napa and Husker Auto Parts. He requested last year’s records of purchases. The city spent $8,693 at Napa and $374.88 at Husker Auto. Sheridan said the discrepancy was from Napa’s state bid that gives the city a 20 percent discount. There was a discussion about how it is the city’s best business decision to purchase supplies at the lowest price.

Sheridan met with the engineers on the wastewater project a few weeks ago. The construction date is projected for late fall to change the valves. The next steps are to get a bond approved and go out for bids.

Hanna-Keelan will host two listening sessions on February 15 about the housing study. One session will be in Rushville at Security First Insurance from noon to 1 p.m. and in Gordon at the council chambers from 5:30 p.m. to 6:30 p.m.

The next regular meeting of the Gordon City Council is March 8 at 6 p.m.