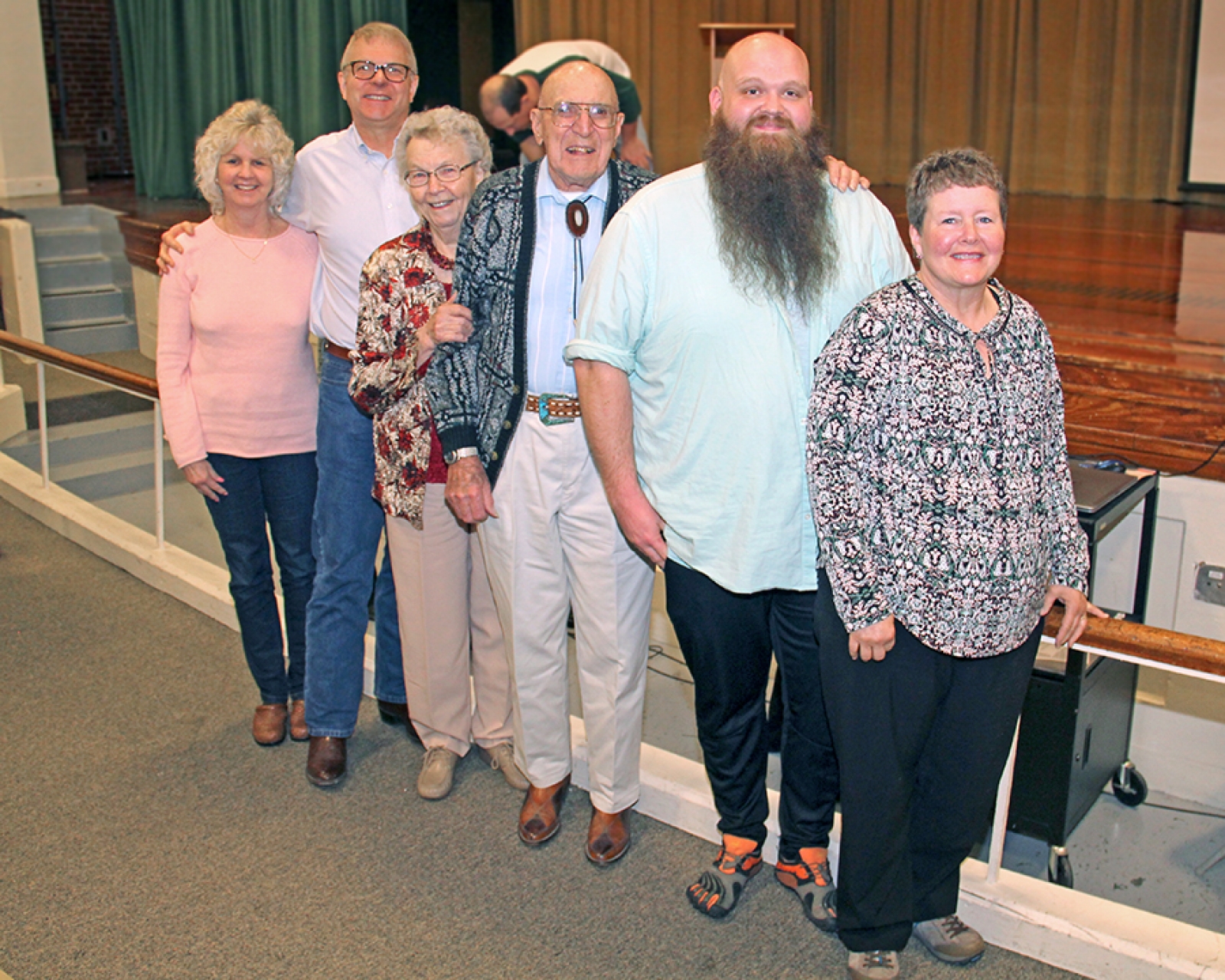 Elders’ wisdom comes from a lifetime of learning and experience. To shed some wisdom, Lloyd and Mary Ann Hunzeker were recognized as the 2018 Hay Springs Elders’ Wisdom honorees. The Hunzeker’s have been members of the Hay Springs community since 1956.

The community gathered in the high school’s old auditorium on Thursday, March 29 at 6:30 p.m. for an evening of insight and laughter. Mark Hunzeker, the son of Lloyd and Mary Ann served as the event’s emcee.

Prior to the evening’s program, the previous honorees received a round of applause for their contributions to the community.

The high school’s video production class met with Lloyd and Mary Ann for interviews about their lives before and after being married. The first video detailed the life of Mary Ann (Becker) Hunzeker. She was born July 8, 1931, to Conrad and Martha Becker on a farm outside of Belden, Neb. She was the seventh of ten children. After her father was kicked by a horse, the family sold the farm and moved to Laurel, Neb.

After college, Mary Ann was a teacher in a country school. At one point the school began to smell strongly of skunk odor. Lloyd’s father set a trap under the school but caught instead of catching a skunk, he caught the school board president’s dog. Another memory she had while teaching country school was grabbing a snake by the tail. She let the kindergarteners outside to play and they ran back to the schoolhouse to tell her there was a bull snake by the outhouse. She grabbed the snake as it went into a hole and killed it. The following morning, the students went to see the snake and found that it had crawled into a culvert before dying.

Following her video, the first graders performed Mary Ann’s song to the tune of “Crystal Chandeliers.”

After the song, the production class played Lloyd’s video. He attended two years of pharmacy school before transferring to the University of Nebraska to finish the program but the draft board in the county decided they were not going to accept more deferments in the midst of a war.

Lloyd and Mary Ann were married in Mary Ann’s parents’ house on Aug. 27, 1951, and four days later Lloyd left for boot camp in Texas. Hunzeker knew if he went into the Army, he would end up in Korea, so he enlisted in the Air Force for four years where he served in South Africa. He returned to college to finish his last year before coming to Hay Springs in 1956 to work at Lloyd’s Pharmacy. Mary Ann was the business’ bookkeeper as the couple worked at the pharmacy for 41 years.

After graduating from pharmacy school in June, they opened the store in July even though he awaited his results to be a licensed pharmacist.  “But we had the store and he was selling prescriptions,” said Mary Ann.

They began a family with their three sons, Mike, Mark, and Scott. As the kids grew up, they enjoyed camping and spending time with neighbors. “That sort of stopped when TV came in,” said Lloyd.

The sons recall spending time at the bowling alley in Hay Springs, Nebraska football games, and camping and fishing trips. From those moments, the Hunzeker’s taught their sons about hard work, honesty, and performing their best.

The program closed with the music video Nebraska by The Marcy Brothers. Following the program, the public congregated in the school’s cafeteria to enjoy coffee and dessert. The Hay Springs High School Choir wrote the lyrics for both Mary Ann’s and Lloyd’s songs.