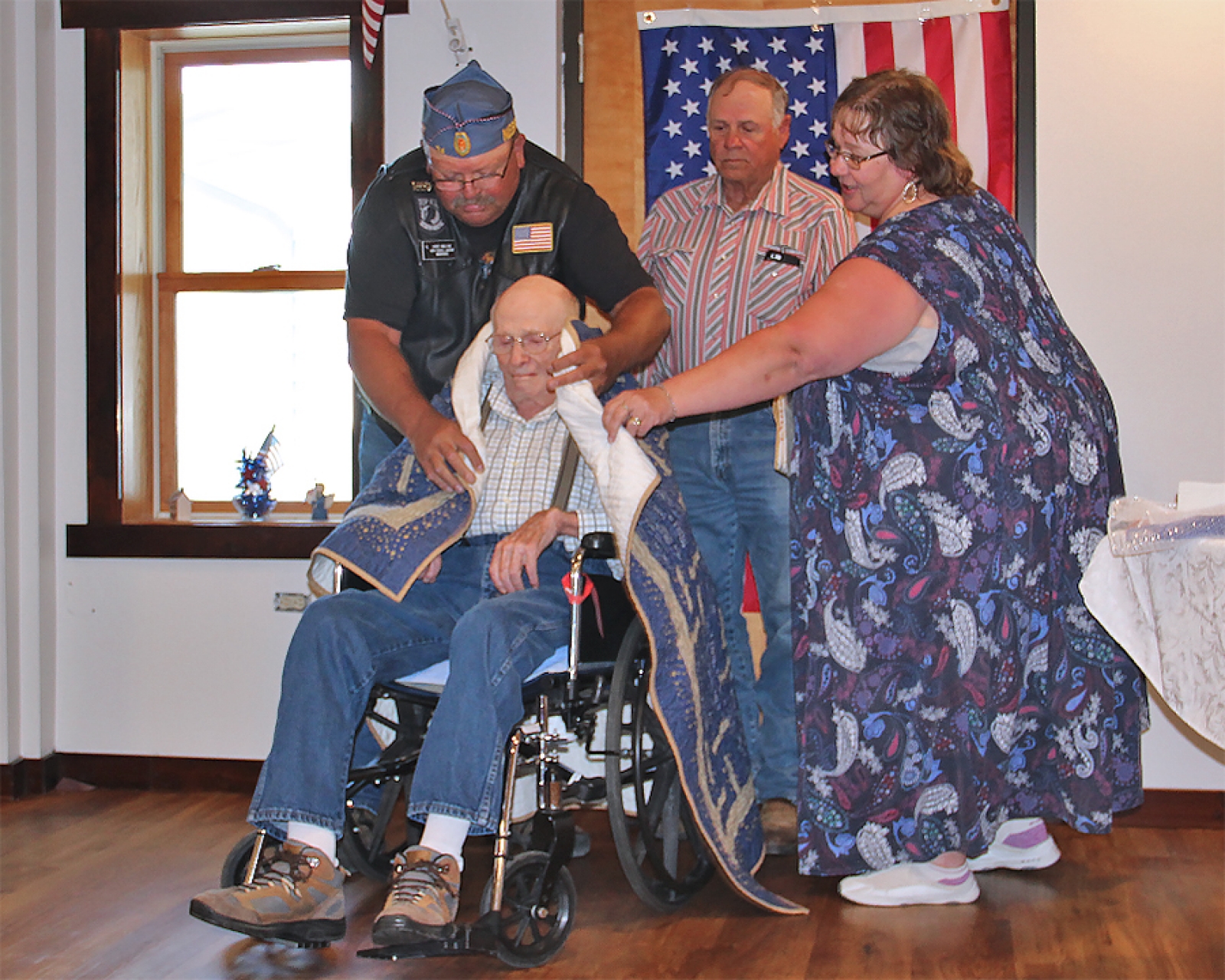 A humble man who protected the freedoms and liberties of our country was honored on Wednesday, June 6 with a Quilt of Valor.

Neal Green, 94, honorably served in the 325th bombardment squadron Army Air Core of the U.S. Army from Sept. 8, 1943, to Aug. 18, 1946. During his service, Green served as First Lieutenant in the Air Force. The 92nd Bomb Group was involved in strategic bombing campaigns, D-Day, Operation Market Garden, cross the Rhine River, and Battle of the Bulge. He even went on a volunteer mission to drop the first Disney bomb. The 4,500 lbs. bomb was too large to fit in the plane, so it was secured to the wings. Green dropped the first bomb, destroying Hitler’s submarine pen. Through all his efforts, Green remained humble.

Seventy-four years to the day after Green’s participation in the D-Day invasion, family, friends, and members of the community gathered at Gordon’s Countryside Care to honor his service and see him receive a Quilt of Valor.

Green’s son, Rick Green was informed of this honor a week prior, but the date wasn’t officially set until Saturday, June 3. Rick told his dad the day before. Green was surprised and said, “oh they don’t have to do that for me.”

As Green and his family went down the hallway toward the dining area, Green realized the importance of this moment as the public came to celebrate and honor his service.

“It’s a small community and everybody does a good job of supporting each other,” said Rick. “I think it means a lot that we are so cohesive as a community and we do care and think about each other.”

Casey Walton and Mitch Gallant of the American Legion Riders shared about Green’s time in the service. They recognized the 74th anniversary of the largest amphibious land and water invasion in history by sharing war lingo and playing the audio of General Dwight D. Eisenhower’s war proclamation for Operation D-Day. Soldiers used code names for the Battle of Normandy and the five beaches where the Allied forces landed. Known as Operation Overlord, the Allied front launched the invasion of Normandy operation on June 6, 1944, with Operation Neptune, commonly known as D-Day. The code names for the beaches where the forces landed were Utah, Omaha, Juno, Gold, and Sword. Green was one of the soldiers who participated in the battle as over 13,000 aircrafts and 5,000 ships stormed Normandy.

First Lt. Green received several honors for his service, which included the European African Middle Eastern Campaign service medal, the American Theater Service Medal, World War II victory medal, and Army of Occupation Medal. “He’s been very humble and made it seem like it wasn’t really anything special that he did,” said Shelly Harding, Green’s granddaughter. “It was just his job.”

Kathy Dye, coordinator of the Panhandle Blocks Chapter of the Quilts of Valor Foundation provided background on the Quilt of Valor as an expression of appreciation from a nation. Quilts of Valor started in 2003 when quilter Catherine Roberts’ son was deployed in Iraq. Since then, over 187,702 Quilts of Valor have been awarded as a way to recognize and comfort veterans who have been touched by war.

Three layers are stitched together to make a quilt and each has a meaning. The decorative layer represents the community, the batting in the center represents hope that the quilt will provide warmth, comfort, peace, and healing to the recipient, and the back represents the strength of the recipient and the support of his or her family, friends, community, and country. Green’s quilt is blue and gold with squares reading “America” and “Land of the Free.”

After sharing information about the Quilts of Valor, Dye and Walton wrapped the quilt around Green. He also received an American flag pillowcase. Although Green’s military dog tags did not arrive in time for the quilt presentation, Walton intends to bring them to the nursing home.

Following the presentation of the quilt, the nursing home offered cake and coffee.

The Quilt of Valor presentation was a tribute to remember and honor a man who selflessly put his life on the line to protect hope and peace in America.