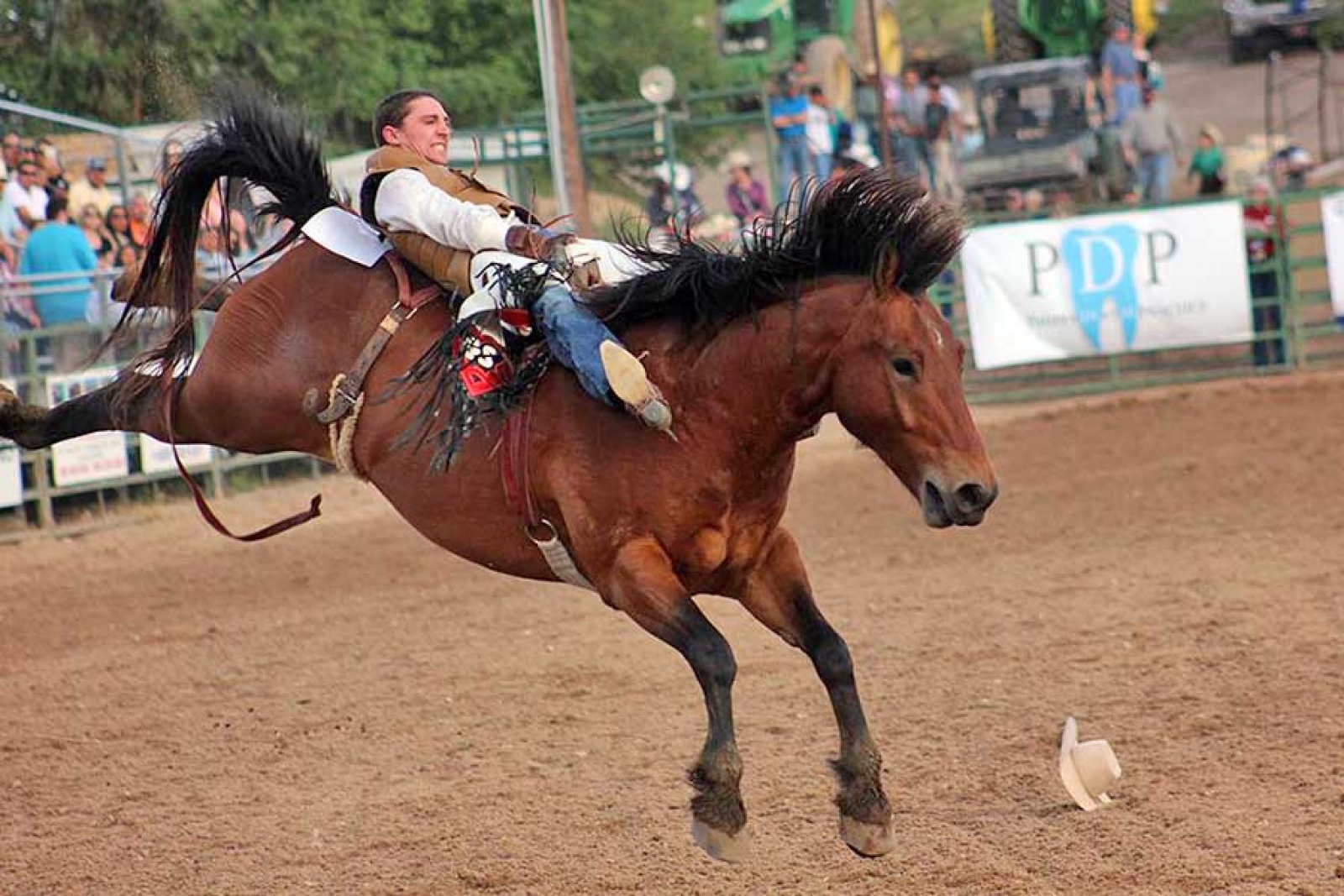 Well, Shadbolt hails from the family ranch 30 miles south of Merriman. He’s been a cowboy all of his life. He went to Doane because it was the only school to contact him following his rather undistinguished wrestling career at Gordon-Rushville High School.

“I qualified for the state (wrestling) tournament as a junior and a senior, but never placed,” he recalled during a telephone call Monday. “That was enough to make me want to try it in college.  When I got a letter from Doane saying they were interested in me as a wrestler, I enrolled there.”

Shadbolt, who is 5-foot-7, always competed at 125 pounds, the lightest weight in college wrestling, and never had to diet to make weight.  This past season, when he was a senior, he finished fifth in the NAIA Regional Tournament with a 4-2 record. He said all six matches were the same day and went the full seven minutes.

Rodeoing also has been in Shadbolt’s blood for a long time, but it’s not been without some glitches.

He recalls that late in the spring in 2014 when he was a high school senior he was bucked off at Arthur, landed on his head and suffered a broken eye socket and cheek bone.  Fortunately, his father, Quint, had flown to the rodeo and took him directly to the hospital in Scottsbluff for surgery.

“That knocked me out of the finals of the state rodeo and my face was still pretty swollen at graduation.  But six weeks later I was rodeoing again,” he said.

Each summer while working on his parents’ ranch, he also rode barebacks at several regional rodeos. At the start of his junior year at Doane in the fall of 2016, he decided to strike out on his own and enter college rodeos.

“My mom, Angela, is my biggest fan and together we figured out how I could do that.  Doane is in the Great Plains Region, we got the schedule of the rodeos and I entered three or four of them that fall,” Shadbolt said.

He explained that although he was taking the required 12 hours of coursework at Doane, one of the credits was in physical education for being on the wrestling team.  The National Intercollegiate Rodeo Association would not accept that credit and ruled him ineligible, ending his season.

Shadbolt said since he was a “one-man team” at Doane, he didn’t get much sympathy from the professors when he asked them if he could skip class on Friday to go to a rodeo.

“I was on my own.  Paid my own way and traveled by myself,” he said. “But I’m used to driving all over.  It took me an hour to get from our ranch to high school every day.”

“I don’t know how I could have done much more,” he stated.  “I drew good horses and rode them about as well as I could.  I didn’t make any obvious mistakes and received pretty high scores.”

Shadbolt placed sixth in both the first and third go-rounds and was second in the second go-round and the finals.

“He rides really well,” Shadbolt said of Berghuis.  “I’ve seen him at some of the pro rodeos I’ve entered.  He was barely ahead of me in every go-round.”

Besides working on the ranch this summer, Shadbolt is planning to hit the rodeo trail, beginning this weekend.

“I’m heading out to Buffalo, Minn., and Clear Lake, S.D., and will go to quite a few over the Fourth of July, places like Estes Park and Greeley,” he said. “I’m riding better than ever and after I graduate from Doane (he needs eight more hours of coursework) this fall, I plan to rodeo pretty much full-time.”

He added that besides taking runner-up honors at the national rodeo, he became engaged this past weekend to his long-time girlfriend. She is Katie Compton, who grew up on a ranch in the Kilgore area, graduated from Cody-Kilgore High School and now attends the University of Nebraska in Lincoln.

“I had a really good week,” he noted.

More in this category: « Hugen and Houx invest in old truck stop, look to open Benny's before fair Kearns inducted into NSWCA for success on the mat, shares passion with his children »