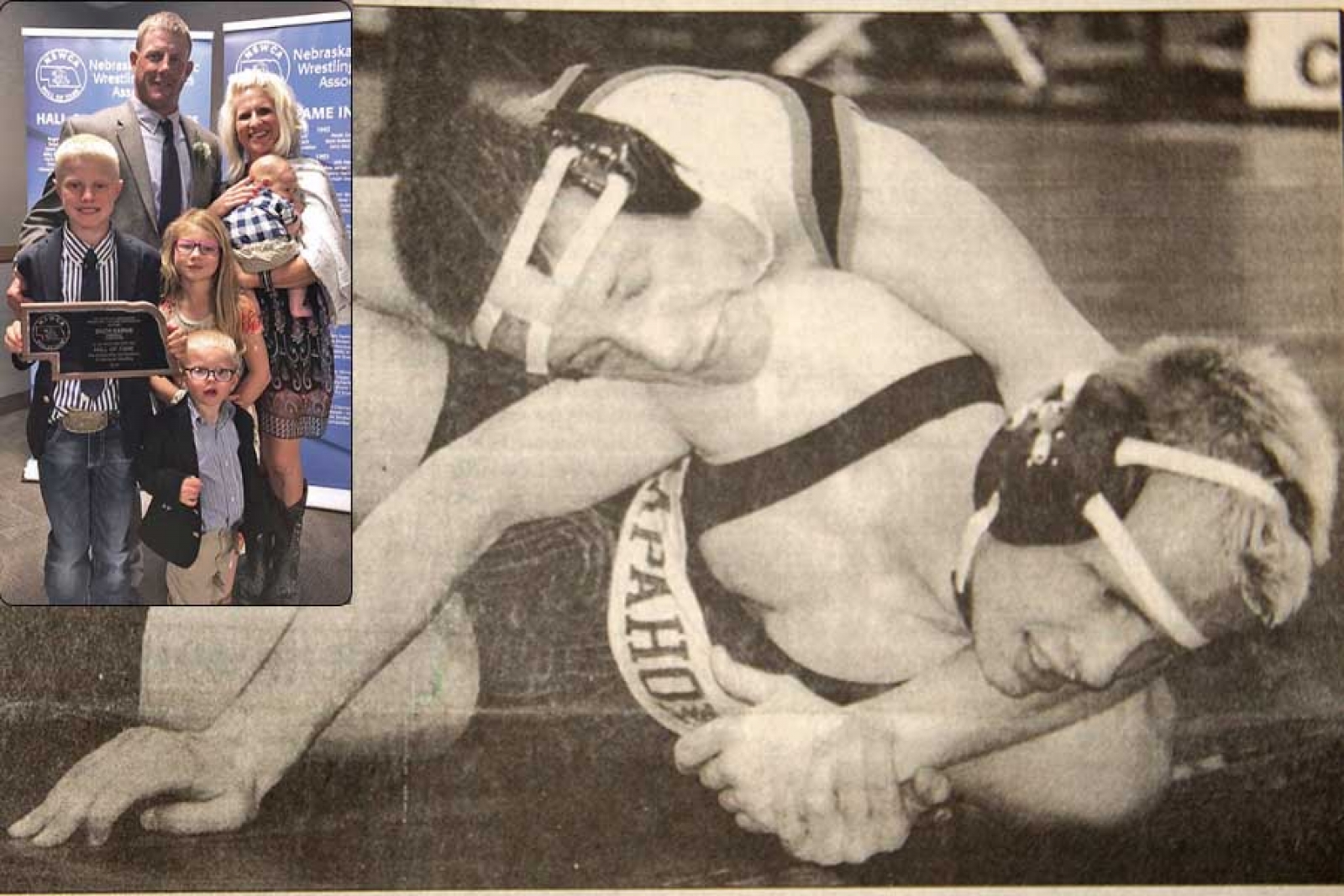 Zach Kearns represented the Rushville High School Longhorns in football, wrestling, and track. He was recently inducted into the Nebraska Scholastic Wrestling Coaches Association in recognition of his successful high school wrestling career.

Kearns attended Rushville High School from 1998 to 2001. During those years, Kearns improved on the mat and became known for his leadership and all-around athletic ability.

As a freshman, Kearns set a personal wrestling record of 25-10. That was a benchmark he would raise every season. As a sophomore, his record improved to 29-8. He was an asset to his team as they went on to finish in third place at the state wrestling tournament.

Entering his third season, Kearns would once again improve on his personal record to 32-3. He also claimed a personal state championship title as the Longhorns placed second as a team. Following his impressive season, Kearns was invited to wrestle at the Disney Duals in Orlando, Fla., which he described as an outstanding experience.

Kearns finished strong his senior year, going undefeated with a 34-0 record and becoming a 2-time state champion. Kearns stuck Newman Grove’s Eric Arreguin in the second period of the preliminary round. He advanced to the semi-finals with a 16-1 technical fall over Jeff Hubby of Kenesaw. Kearns again dominated Howell’s Rick Bayer 6-1 in the semi-finals. In the match for all the marbles, he faced Scott Taylor of Arapahoe and won 10-4. Looking back on his success, Kearns is grateful to the coaches and teammates for pushing him to his endless boundaries.

“Zack was always such a leader on the team,” wrote Mark Loosvelt of Rushville. “When a dual or tournament was going bad or Rushville needed a boost, you could always count on Zack Kearns.”

The Longhorns swept the team state championship that year, too. They dominated the mat, scoring 123.5 points compared to runner-up Winside with 95 points. The Longhorns brought home 7 medals, ranging from sixth place to first place.

After graduating, Kearns attended Colorado State University where he played football for the Rams as a freshman and sophomore. While at CSU, he met his wife, Brittney, who was also attending school. He then transferred to Chadron State College to play football for two years. The couple moved to Denver after graduation and were married in 2006.

Following the birth of their first son, Jaxon, they moved back to the Kearns family ranch in Rushville. Kearns became the head wrestling coach for the Gordon-Rushville Mustangs and remained in that role for 5 years. He stepped down as the head coach in 2011 after his daughter Kennedy was born to focus on his family and the demands at the ranch. He then became the junior high head wrestling coach and welcomed a second son, Maddox. He remains active in the federation wrestling program with his son, Jaxon and enjoys helping him and the rest of the “little Mustangs” learn wrestling fundamentals.

The Kearnses’ welcomed a third son, Krue this past spring. As his sons continue to grow, Kearns looks forward to being a part of their athletic careers.

Kearns was honored at the NSWCA banquet on Friday, June 8 in Grand Island. Mark Loosvelt of Rushville nominated Kearns. “When he was a senior, he was absolutely the leaders of a very good group of wrestlers,” wrote Loosvelt. “He is a quality addition to the Nebraska Wrestling Hall of Fame.”

Gordon-Rushville Public Schools Athletic Director Ward Wacker called him in March to let him know he was in the 2018 inductee class. “I was shocked when I received the call and felt very humbled to receive such an honor,” he said.

Kearns left a legacy in the Rushville High School wrestling books. He is one of three wrestlers to go all year undefeated and is one of three wrestlers to be a 2-time state champion. Now, he is passing his love of wrestling onto his children. “My passion for wrestling began at a young age and has never stopped,” said Kearns. “I am now getting to watch my kids on the wrestling mat and seeing their love and determination for the sport makes me very proud.”