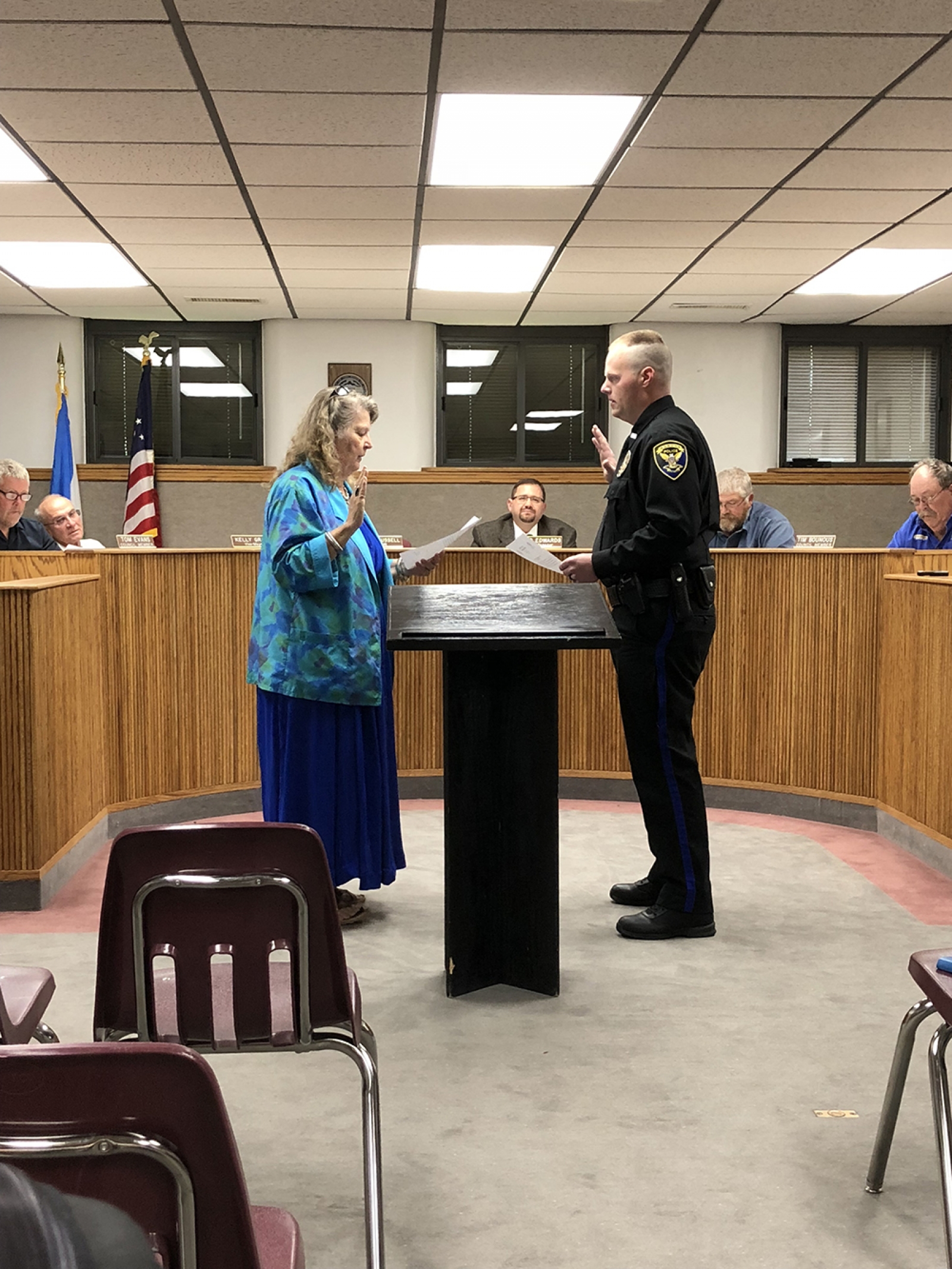 The Council moved to accept the July 9 minutes and approved the treasurer’s report as presented. After review, the council voted to pay the unpaid bills, totaling $77,645.53. Total August bills were $200,739.70.

Resolution 2018-17,  pertaining to constructing improvements to and replacement facilities for the City’s sanitary sewer system was reviewed and approved as presented.

Ordinance 1175 was presented for the issuance of bonds for utilities and sewer improvements in total of $660,000 to provide interim financing. All voted aye to approve. Slaughter added that the coupon rate for the bonds will be 1.85%. He also passed out an information sheet to the Council, which included an interest rate breakdown.

A request from King Pin Lanes for extended liquor sale hours for tournaments in September, December and March was approved.

Many members of the community were present to discuss a change to the liquor sale hours ordinance. It is currently illegal to purchase any type of alcohol within the city limits of Gordon on Sundays, and many in the community were in attendance to voice their opinions on changing that ordinance. Todd Arends was present on behalf of Open Range Beef to state that he feels the city loses out on potential tax dollars by not allowing liquor sales on Sundays. “I bring customers in on a weekly basis that show up in this town on a Sunday, and they will not stay in the city of Gordon. They take their money to Chadron because there is no alcohol sales here. You can’t take the customers to a restaurant to eat and have a beer or a drink. There are several hundred thousands of dollars being lost every year by this city by not having alcohol sales on Sunday. The second flip of that coin is that I am the largest employer in this town, and I’m putting my people at risk driving out of the city of Gordon and taking their money other places and spending it instead of spending it in this town. I think it’s a huge mistake. It would bring hundreds and hundreds of thousands of dollars of sales to this town,” stated Arends.

Casey Walton was also present to voice his concerns, echoing what Arends said. “Along with those sales comes the money to generate for repairing the streets and the sewer you (the council) were just talking about, but (right now) that all leaves town.”

Mitch Gallant spoke on behalf of the Gordon American Legion, “It would be nice to be open without having to come to the Council to ask permission.” Gallant also went on to say that the Legion is trying the get the Sons of the American Legion going, and that it may be a way to entice engagement in the Sons if they were able to host events on Sunday, such as NASCAR and NFL parties. He also went on to state that he feels the residents of Gordon are being penalized while all the communities surrounding Gordon allow Sunday alcohol sales, and that the people of Gordon will go somewhere else to get alcohol if they really want it.

Marlin Sandoz of Fuel Grill was also in attendance, and echoed previous community members’ complaints that surrounding communities can sell on Sundays. “I personally just think its an outdated ordinance. It serves no purpose.” Sandoz went on to say that he is not sure at this time if he will start opening his restaurant on Sundays, but the city is losing out on potential tax dollars, and businesses on potential sales by not allowing Sunday alcohol sales.

Walton went on to say that it should be up to the individual businesses if they would like to be open and have alcohol sales on Sundays, rather than having to get on the Council agenda.

Council Member Tim Bounous stated, “Times change...what’s fair is fair, and what’s not is not, and I think probably it is unfair to other businesses in this town that the ordinance is there considering today’s culture and attitude. Regardless of any other reasoning, not that it makes it right, it just seems probably unfair and not judicious to those other businesses here in town.” Council Member Tom Evans also stated that even though he doesn’t necessarily agree with changing the ordinance, he doesn’t agree with being unfair either or stifling business.

After further discussion between community members and Council Members, it was decided to reach out to current liquor license holders and get their input on what they would like to see. The Council expressed interest in updating the current ordinance, and that there will be an ordinance regarding liquor sale hours on the September agenda.

The Council passed Resolution 2018-18, allowing the closure of Main Street from 1st Street to 3rd Street on Saturday, September 29 from 6 a.m. to 6 p.m. for the Gordon Chamber of Commerce’s annual Fall Festival.

Ordinance 1176 to amend Section 6-207, and Ordinance 1177, amending Section 6-306,  amended the payment and delinquent dates for the water bills and sewer use rates. Water bills will be due the 15th of each month, and will become delinquent the 16th day of the same month, unless the 16th falls on a Saturday or a holiday, in which case they will become delinquent the next business day. Water bills not paid by the due date will be subject to a penalty charge. As per Ordinance 1177, the same due dates, delinquency dates, and penalties will apply to sewer rates. Council voted to waive the second and third readings of both Ordinances, and voted to pass both as presented.

Resolution 2018-19 would authorize the City Council to assess a penalty charge for delinquent water and sewer bills at a rate of 10% of the balance owed for the current month’s bill if the bill is not paid by the 25th of each month, or the next business day if it falls on a weekend or holiday. The Council voted to pass Resolution 2018-19.

The City is currently decommissioning wells that are no longer being used. Steve Sanders expressed interest in purchasing land back from the City. That land was purchased by the City to build Well #2 in 1974 for $1. Resolution 2018-20 was presented to direct the sale of that land to Steve Sanders for the same $1 the City of Gordon paid for the land. With a roll call vote, all Council Members voted aye.

Edwards informed the Council that he had received a bid for security cameras for the swimming pool. The quote is for four cameras with night vision for a total installed cost of $762.54.  The swimming pool has had several incidences of people climbing over the fence and swimming after hours. Damage is not usually done, but it is hoped that having a security system would deter these incidents. Spaugh told the Council these cameras are very similar to the ones installed at the Airport, and attested to their quality. The Council voted to approve purchasing the security cameras for the swimming pool.

An application for the Gordon Volunteer Rescue Squad was submitted by Ken Costello. The Council voted to approve Ken’s application.

Thursday, August 30 at 6 p.m., the City Council will hold their budget workshop for the 2018-2019 budget year. Jim Gardner from Gardner, Loutzenheiser, and Ryan will be working on the budget on August 21.

Edwards informed the Council that they had received two quotes back out of the three they requested for hotel feasibility studies. He recommended that if the Council would like to move forward with a hotel feasibility study, that they go with the same company that completed Chadron’s study, Core Distinction Group. The quote they received was for $8,000, with $4,000 being due up front and is non-refundable. There was discussion on the necessity of this study, and it was decided to table it until the September meeting.

Tom and Mary Jo Moore approached the Council to discuss installing a Disc Golf course in the city park by the swimming pool. Tom informed the Council that the cost for nine galvanized, dipped baskets would be $2,500, and they would come with a 25 year warranty and nine free signs. The Moores expressed the desire to pay for these baskets if the Council approved, and would also donate time to install the baskets. It was agreed that it sounds like an affordable sport to get into, and would be good, low impact exercise. The Council voted to approve the Moores’ request and gave their blessing to start the project.

The final item on the August agenda was whether the Council thought a current road grader should be repaired for a cost of $20,026, or if a new grader should be purchased. It was discussed that the current grader is believed to be a 1981, and replacement parts are no longer available and must be custom made. They received a quote from Murphy Tractor in Gering for a 2006 John Deere road grader for $69,500. Edwards believes they could also get some money from the current grader as a trade. Public Works Director Dan Bishop has done extensive research to find an affordable replacement, and will continue to look around and provide more information to the Council at the September meeting.

With no further business, the meeting was adjourned at 8:02 p.m. The next regular meeting of the Gordon City Council will be September 13 at 6 p.m.