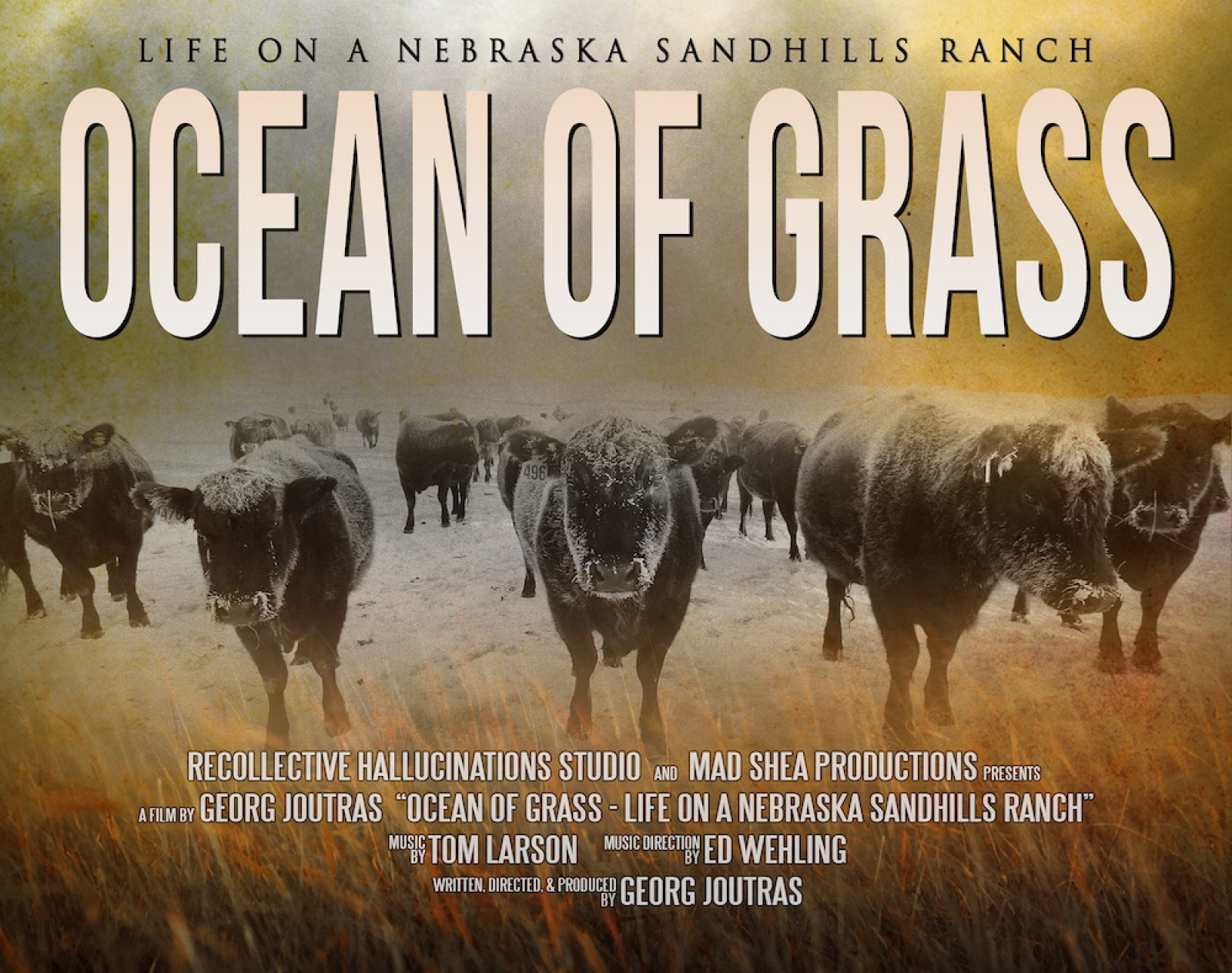 It’s not every day you have the opportunity to watch a movie featuring real-life ranching in the Nebraska Sandhills. Patrons of the Gordon Theater will have such an opportunity the weekend of Nov. 9-11 when Ocean of Grass by Georg Joutras comes to town. The film, completely shot and produced by Joutras himself, features the McGinn Family Ranch, located south of Dunning, Neb. Joutras spent two years shooting for the film, followed by another 22 months of post-production work. The film features a musical score written by renowned Nebraska Composer Tom Larson.

Joutras, a Nebraska artist and author, first visited the McGinn Ranch in 2003 while in the area working on a book. He had met owner Laron McGinn at an art gallery in Lincoln the week before and, after hitting if off, McGinn invited him out to the ranch if he were ever in the area. Joutras intended to just stay the night and be on his way, but he found the ranch such an inviting, open, calming place to be that a whole week had passed before he could make himself leave.

Knowing there was a story to be told about this magical place he had found, Joutras wrote the book, A Way of Life, about the ranch in 2007. He continued to visit the ranch regularly and photograph the one-of-a-kind scenes of the Nebraska Sandhills. In 2014, he was gifted a GoPro camera by his family and began using it to capture what still photography could not.

“I was like, well, that’s great, now what do I do with it,” Joutras said of the gift. “So, I decided maybe I’ll go out to the ranch and start shooting some video, not really expecting anything to happen with it. After 4-5 months, I ended  up shooting enough footage that I did a little trailer on the film and showed it around to the area, and the people that saw it thought I should keep going – there’s a good story to be told there.”

After a full year of shooting, Joutras upgraded to a professional-grade camera. The difference in quality was so significant that he ended up spending another year literally re-shooting the entire movie. None of the scenes nor dialog in the film are staged or scripted in any way, and Joutras assures there are no special effects or explosions. To help ensure he didn’t miss a shot, as well as to help earn his keep at the ranch, Joutras would help out by running cows, checking pastures, whatever they would let him do. “They made sure I couldn’t mess it up too bad,” he said with  laugh. “I’d be out helping with roundups and so forth and then when something needed to be filmed, I’d go into cinematographer mode, and I’d have my cameras with me and start filming. It is exactly as it happened. There is nothing staged. There is no script. This is as real of a film as you’re probably ever going to see.”

While the film covers a year in the life of a Sandhills ranch, Joutras stresses that the story is really much bigger than that. It’s about the people, their long-term views of the landscape, and how they treat the animals in their care with incredible compassion. “I thought that was important to get out there in the world as well,” he noted. “It’s really about Nebraska and the Nebraska people and how we kind of look at the world, and the quality of people that are in this part of the United States.”

While Joutras didn’t start shooting video with the intent of making a movie, Laron McGinn admits that it wasn’t much of a surprise when it came to fruition. “I had no idea he was about to pursue our lives, yet it was such a natural progression of his skills and talents,” said McGinn. “It’s an incredible legacy personally for us involved in the film. More than that, I think it tells the story that every rancher, everyone in this business, would like to portray to the world. It’s an honest work – hard work. There’s a freedom of choices, yet it’s the stewardship of the land, being very mindful of everything, every season. We think of not just for today but for down the road, for their kids. Bigger than that, it shows the care and compassion for the animals, for the cattle in our care.”

“I think it’s so genuine and that’s what I’m most proud of. That’s what resonates the most with me,” he concluded.

The film premiered at the Kansas City Film Fest in April and sold out the screening. “The Q&A ended up going on so long that they had to shut us down and kick us out because they had another film to show,” Joutras said proudly.

Ocean of Grass: Life on a Nebraska Sandhills Ranch opens at the Gordon Theater Friday, Nov. 9 with showings Friday and Saturday at 7 p.m. A special matinée showing will be held Sunday at 1:30 with Joutras attending in person to hold a Q&A session after the movie at 3 p.m. All are invited to attend the Q&A. For more information on the film, visit oceanofgrassfilm.com

More in this category: « Parkview Lodge hoping to continue positive momentum with another four years of tax aid 2018 Election Results »