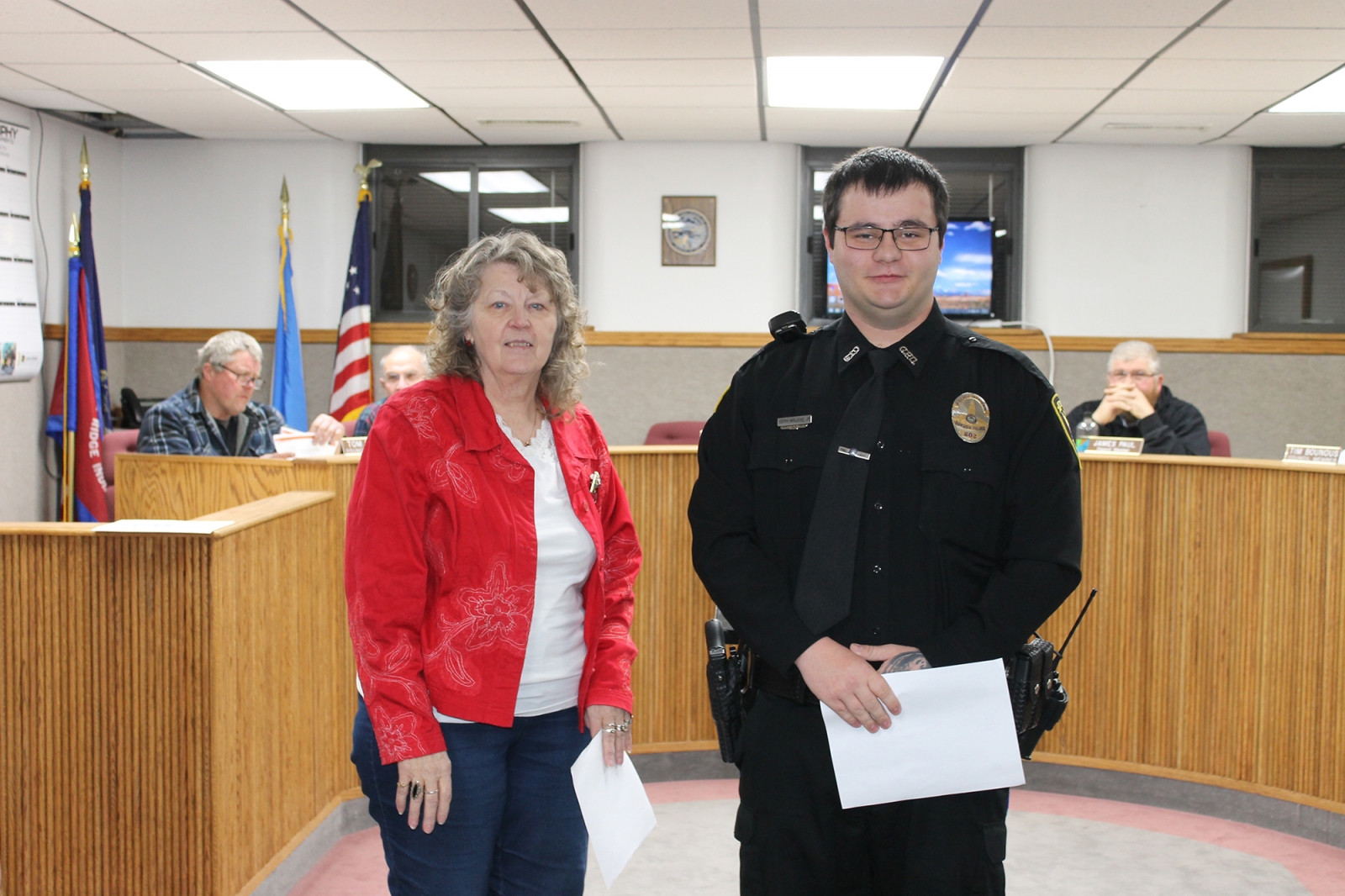 The February 14, 2019, regular meeting of the Gordon City Council was called to order at 6:00 p.m. Mayor Russell acknowledged the posting of the Open Meetings Act in the meeting room. Council members Paul, Grant, Bounous and Evans were present, as well as City Manager Glen Spaugh and City Clerk Kim Buchan.

Mayor Russell welcomed Shelby Reynolds on board as the new Deputy City Clerk.

City Manager Spaugh opened the public hearing on the One and Six Year Street Improvement Plan. This year they will focus mainly on maintenance, road repair and the filling of potholes, with the exception of Winter Drive (formally known as Rodeo Drive). The Winter Drive project will include cleaning the ditches, extending one culvert, and reshaping and re-graveling one block of the road. The public hearing was closed with no public comments.

The city council approved Resolution 2019-01, the One and Six Year Street Improvement Plan, as presented.

Keith Wolkins was sworn in as the City of Gordon’s newest Police Officer by Mayor Russell.

Karen Eisenbarth, from Northwest Community Action Partnership, met with the council to request support for the Sheridan County Transportation agreement. The Sheridan County Transportation program covers Gordon, Rushville and Hay Springs. Gordon saw an increase of 51% in boarding’s last year. The Department of Roads has changed the grant from a one year to a two-year contract. Ms. Eisenbarth stated that the increase in people receiving services will be worth the two-year agreement. The council approved the two-year agreement with 2019 being $192.93 and 2020 being $196.64.

Casey Peterson and Associates met with the council via an audio phone conference call to review the 2017-2018 fiscal year audit. There were no control deficiencies and no non-compliance reports. Casey Peterson and Assoc. stated that all information they required was received and questions were answered in a timely manner, and that the audit went well with the City Manager. The council approved the audit as presented.

School Resource Officer Colin Hyatt has made a recommendation to the council to review the current school speed zones. Hyatt’s suggestion is to reduce the speed limit from 25 mph to 15 mph due to the excessive amount of traffic in both the elementary and high school zones. New signs will need to be purchased, and the school has verbally agreed to financially assist with the cost. Hyatt will do further research and this item will be addressed at the March meeting.

City Manager Spaugh gave a quick update on the Solar Project. Both Glen Spaugh and Dan Bishop presented the council with updates on the wastewater project. Matt Kautz is the engineer with Baker & Assoc., and Ken Wood is the contractor. Mr. Wood was here about four (4) weeks ago to deliver parts for the lift station but no further work has been completed. City Manager Spaugh has requested amendments to the contract since the original completion date was to be December 5, 2018. Public Works Director Dan Bishop is very concerned with the time frames they are giving him.

Council member Bounous stated they need some answers from Baker & Assoc. for the lack of performance by Ken Wood on his work. The city has paid Ken Wood approximately $81,000 for the parts, which was in the original contract. The city is holding up their end of the deal, but it seems as though Baker & Associates is not. It was suggested that Baker & Assoc. be at the next council meeting, as the city has been paying Baker & Associates for over two years, and the project needs to be completed.

Spaugh explained that the original engineer who put in the bids for the city has retired, and that the individual who replaced him is having a hard time picking up where his predecessor left off. Also, he believes that the contract is too general with the terms that are written and there are several aspects that he doesn’t like. Bounous stressed the need to hold Baker and Associates accountable, and if they don’t get something done, then the city should start looking at how to get out of the contract.

The 2019 (P)ACE contribution to the City of Gordon was $4,403. The city police department is in need of new bullet proof vests, with the cost ranging between $420 and $900 each. Also, the City of Gordon is looking at updating the Christmas lights from incandescent to shatterproof LED and purchasing snowflakes for decorating along Highway 20. The council approved the motion to split the (P)ACE contribution money between the two projects.

Spaugh suggested bonuses for Kim Buchan and Dan Bishop in recognition of their efforts during the City Manager transition. The council approved the motion for the bonuses for Mrs. Buchan and Mr. Bishop.

Glen Spaugh updated the council on the Plum Street Litigation, stating that the case has been dismissed at this time.

With no further business, the meeting was adjourned at 7:03 p.m. The next regular meeting of the Gordon City Council will be March 14 at 6:00 p.m.