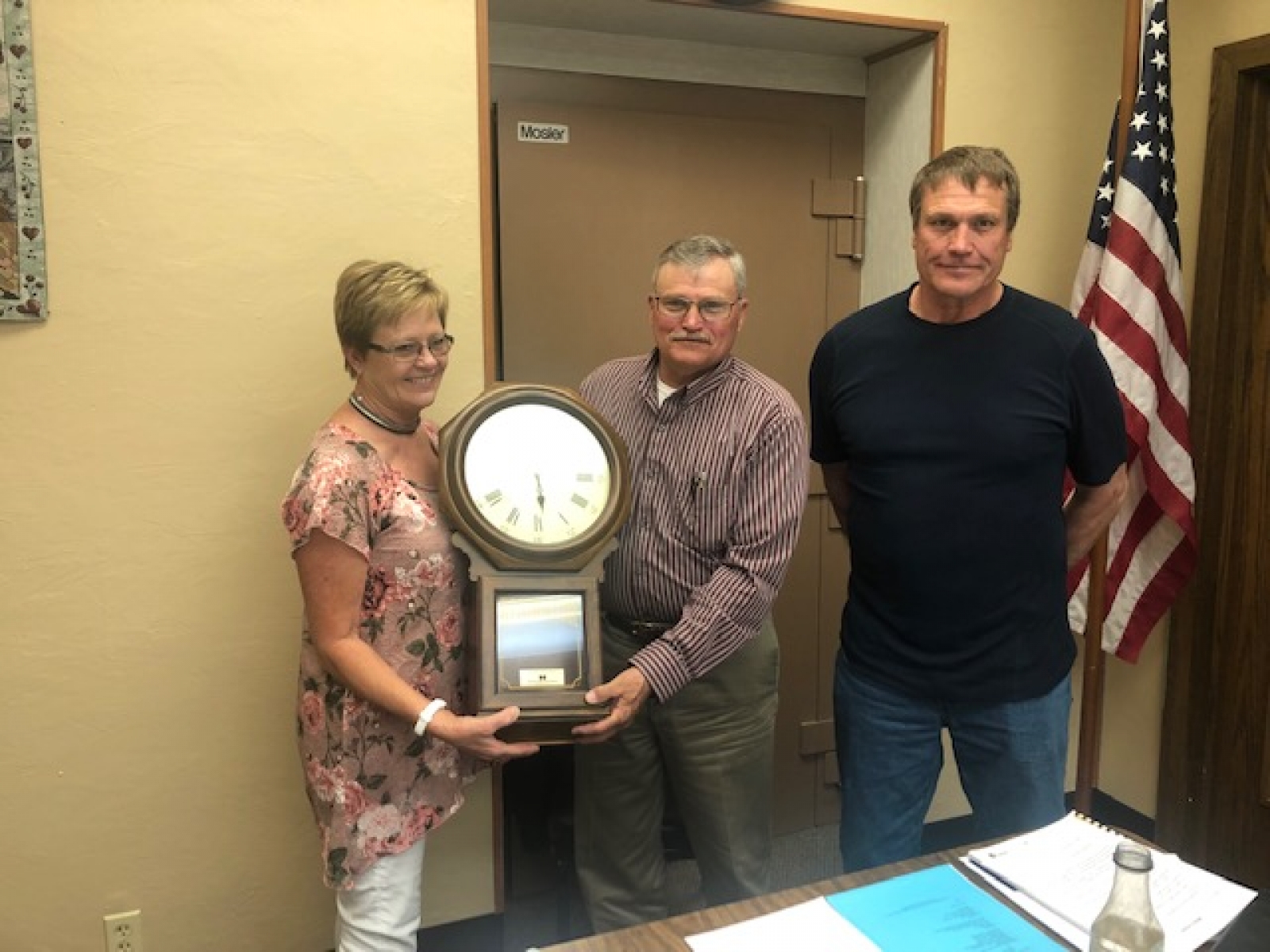 Terry Rajewich with NPPD, Doug Johnson, local NPPD manager and Jennifer Branson, Chadron NPPD office manager, were present to give a presentation and review the professional operational agreement with the city council.  The presentation was on retail updates and future plans for the city of Hay Springs. NPPD is a not-for-profit organization, and has gone six years without a rate increase. They service 91,500 customers in 71 communities, and municipal discounts are given up to 33.33%. Plans for Hay Springs include installing new meters starting in June/July to help with remote meter readings, power on/off options remotely, and diagnostics for high temp, high bill, ping transformer overloads, and meter diversion detection. NPPD is continually using technology to keep rates low for customers. There will potentially be an option of community solar power for a renewable energy source under the operational agreement. NPPD is doing LED conversion, which is at 31% so far. The cost is coming down as the conversion “roll & replace” is happening, and the plan is to be finished by 2022. There will also be a new online customer portal out in late September. Rajewich and Johnson presented Mayor McKay and the city council with a Bulova clock.  A resolution for an enhanced professional operational agreement for 25 years, was tabled to the May meeting.

Don Dye with M.C. Schaff & Associates was present to give the council an update on the CBDG alley project. The plan is to replace the cast iron main with a PVC main and get rid of the joint. They will line 780 ft. from 3rd street to the 1st manhole south of 2nd Street.  There was some discussion and concerns by residents about damages from water influx on 2nd Street. Dye presented the council with cost estimates and the plan that will be put out for bids.

Darren Drabbels was on hand to voice his concerns on the number of stray cats on the streets. He stated that his yard has became a litter box, and he does not own any cats himself.  He had spoke with the animal control officer who said he was supposed to stay away from the cats and focus on the dogs. The council stated that once there is a complaint, then it will be taken care of. A residence at 229 N. Miller has the same problems and concerns.  The city has received other complaints of residents actively feeding the strays.  Mayor McKay will contact Austin Reed, animal control officer.

For the street/water/clerk reports, the city council approved the purchase of loads of repaving material to fix the streets.

Krystyn Turman gave the Pioneer Manor report.  She stated that it was a good month, but February is a short month and there were many of insurance renewals, which made for a deficit. The parking lot will need to be redone from all of the damage from the water and snow.  Bids will be brought to the city council when received. The portion where the issue is in the alley will be paid for by the city when redoing, and the city has blocked off the side of the building where the majority of the damage is.

For the mayor’s report, McKay sited that he reviewed hours of the sewer inspection video.  He also spent a day on the 4-wheeler taking pictures of and making notes of the damages on the streets. There was no report for the nuisance abatement officer.  The finance committee looks good, no further discussion there.  The SWANN board met last month to review unpaid assessments, and will be having the salaries schedules review coming up.  The Lister-Sage board met last night, and the landscaping project bidding is going out and annual fundraiser is coming up.

Jim Varvel attending the PADD meeting on March 22 with Megan Copenhaffer, and they will be putting together a planning committee.

Aaron Taylor gave the water loss report, stating that it has been staying steady around 40%. There is no water line damage as of late.  He stated that more meters will be replaced this summer, as well.

Mayor McKay opened the sealed bids for the pivot land lease.  One bid was received, and it was not in line with what the council is wanting to happen.  Council would like to have someone custom farm this for the city as there has not been any relevant bids, and they are wanting to have corn planted in order to get the pivot back into shape, according to the agronomist’s suggestions. Members of the council will talk to a couple of individuals and have more information at the next meeting.

In terms of the Ladies Lounge, the council discussed advertising for bids or private sale of the Lounge.  Council decided to keep the property and continue to allow the Chamber to use the space for storage.  The individuals that were interested in purchasing the Ladies Lounge, will be contacted by the council.

The city council discussed employee requests to move the pay day up one day.  The city council passed a motion to amend the policy and reflect it in the handbook that the city employees pay date will be moved to “the first working day after the pay period ends”.

The claims were approved as presented, and the March Treasurer’s report was also approved.  Mayor McKay commended the city employees for their work and presented an EMC insurance dividend check for safe employees.

Aaron Taylor updated the council on the Hanks Well.  The well test estimate came in with a bid of $9,900, which includes transportation, drilling and city analysis. This is being completed with the hopes of being able to use it again if needed as a backup. Council is asking for further consultation to see what they are up against in the long run to get it up and going before any further decisions are made.

Aaron Taylor requested that the city office upgrade to a color printer/scanner/fax combination. The current one is from 2010 and is black and white only. City council is tabling this option for a later date when the current printer is needing to be replaced.