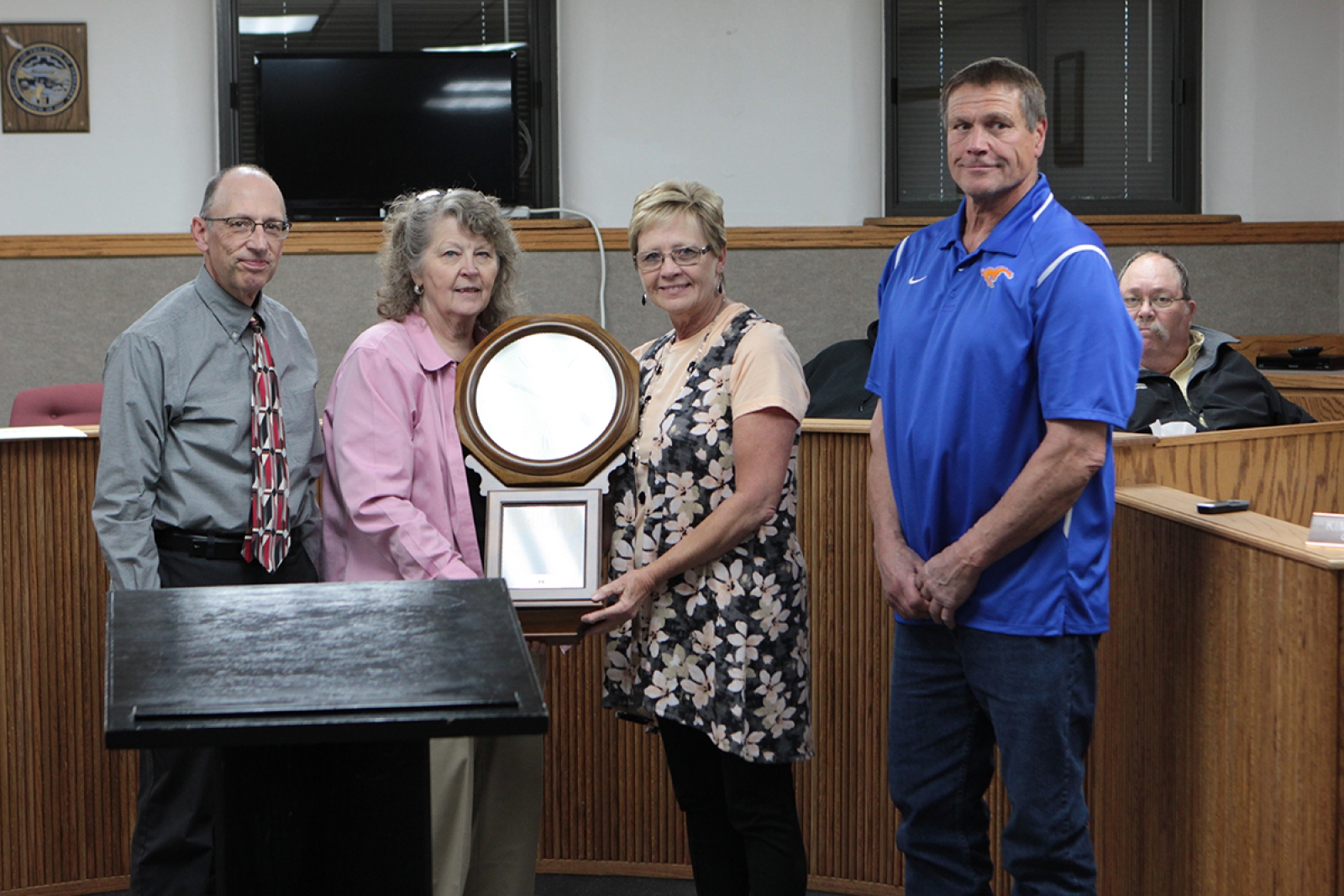 Janet Hess of Lone Willow Tree Chapter, DAR addressed the council in hopes of getting money for a historical marker for the Willow Tree. The State Historical Society has already approved the marker, but $2,300 must be raised to pay for it before they will begin to make it.

The marker is cast in iron and takes 8-12 weeks to make. The hope is to have the marker ready to be dedicated at this year’s Willow Tree Festival. No action was taken during the meeting.

The city’s NPPD account manager, Terry Rajewich, was present to discuss the current services being offered to the city as well as an opportunity to enter into a new agreement with updated terms. Rajewich also discussed new services being rolled out in our area, including new meters that can be read and controlled remotely. They also gifted the city a clock in appreciation for their past work together.

The council’s next business was to discuss and vote on Ordinance 1182, which would amend Section 4-205 of the Gordon Municipal Code, covering the allowed hours of alcohol sales within city limits. The ordinance would add sales on Sundays from noon until 1 a.m. the following day. The council had been approached last month by Ray Misner of the Gordon Chamber of Commerce and several business owners.

James Paul made a motion to approve the ordinance. Tom Evans asked if the new hours fit within state law and was told that they were actually slightly stricter than state law. Evans then seconded the motion.  Councilman Tim Bounous, who was absent from last months meeting, then asked for clarification on how the council came to voting on the issue after deciding to put the issue to a public vote just a few months ago. Some of the other council members filled in Bounous, who also noted Misner had visited with him on the issue privately, but said he still didn’t see a compelling reason to change the law. “I don’t see the overall good or the rationale for this to be changed,” he said. “I don’t necessarily believe that it’s going to bring business to Gordon on a Sunday.”

“To me, you’re sending a message that, if you want to open a business around Gordon, especially if you want to have alcohol, you better do it outside city limits,” said Marlin Sandoz, owner of Fuel Grill.

Kerry Butler of Daylight Doughnuts said for her, as a new business coming to Gordon and planning to be open on Sundays, it’s not an alcohol issue for her, but a business one. She referenced the Bike Ride Across Nebraska coming to town in June. It’s on a Sunday, so few establishments will be open, and volunteers needed to be rounded up to prepare food.

Bounous questioned whether businesses that sell alcohol would even be open if alcohol was allowed on Sundays or if new businesses would come to town. Sandoz said that in his case, he hasn’t even had the chance to consider it because of the current law, but feels it’s his right to have the opportunity. He said he would definitely be open for special events at the very least, and doesn’t feel it’s fair to have to come before the council and request special permission every time.

Misner also revisited some of his points from last month, including creating a fair playing field for local businesses, generating increased tax revenue for the city, increased wages for employees which could then be spent locally and the opportunity to grow business downtown on weekends.

Bounous responded that the question goes either direction and that he still hadn’t heard a good reason to allow Sunday sales. He said that he didn’t know of any business in all the years he had been here that was made or broke by the ban on Sunday sales.

“Basically, what you’re trying to convince me is that people aren’t coming to Gordon, Nebraska, to shop because there isn’t a place to eat or a place that serves food or alcohol, and I’m saying that there’s a lot of people that don’t come to Gordon for a lot of other reasons than that.”

Butler argued that people should have the right to purchase alcohol on a Sunday in town if they want and that maybe the council didn’t realize how many people leave town every Sunday to eat and shop. Maureen Hess was also present to express her support of the change, arguing that she would love to be able to have a meal with a drink locally on a Sunday instead of having to travel out of town.

“Where can you eat in Gordon on a Sunday anyway?” asked Bounous.

“That’s the point,” several members of the public said in unison.

When the issue was finally called to a vote, Evans and Paul voted for the ordinance, and Grant, Russell and Bounous voted against it.

The council approved the parade route for the 2019 Fair and Rodeo, Saturday, July 27.

Applications for Bobby Delgado and Sherrie Kaplan to join the Gordon Volunteer Rescue Squad were both approved.

Resolution 2019-05 was passed to establish a charge of $50 for dumping loads of waste at the city’s wastewater lagoon.

In an update on the GenPro solar project, Spaugh noted that the system was up for a couple days, then brought back down for inspection. They hope to have the panels back online in June.

The Nebraska State Fly-In will be held on Sunday, June 1. There will be a fundraiser this Saturday evening at the city auditorium from 5-7 with soup, bread and dessert and a silent auction. Donations are being accepted for the silent auction. The city hopes to offset the cost of the fly-in, with any funds left over going toward hangar repairs.

The city is working to purchase property north of the city shop to fence off and use for storage. Dan Bishop said the owner will take $16,000 and that he should have enough from overflow to cover it. Bounous asked if those funds would be better spent on fixing up roads.

Bishop noted that they are looking at foregoing armor coating most of the roads this year and focusing on pot holes and armor coating the patched areas.